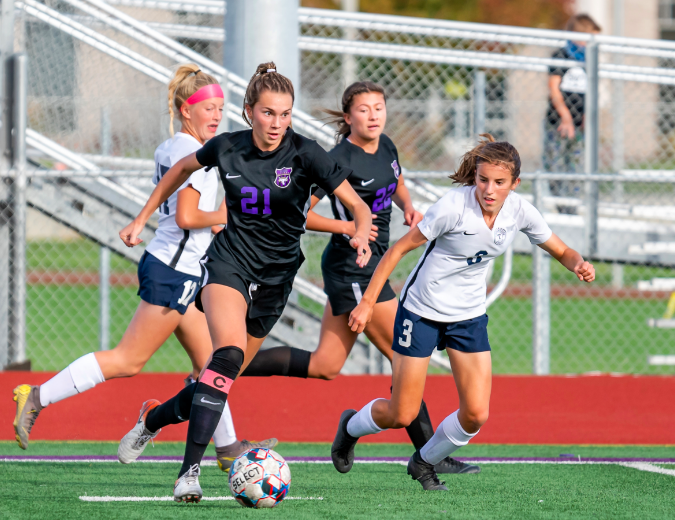 The Lehi girls soccer team was eliminated from the state playoffs in the second round after losing to Timpanogos 3-1 at home on Oct. 13.

This was the third meeting between Lehi and this Region 7 foe this season. The Pioneers prevailed in the first two games and were the league champions.

The sports adage about the difficulty of beating a good team three times in the same season proved to be true in this case.

Ten minutes into the game, the Timberwolves scored after a controversial call awarded them an indirect kick in the box.

“The girls just had to keep their heads up and control the controllables,” said Coach Tim Graham, praising his team for remaining composed after the call. “They settled in and did a great job. They made the best of a really tough situation.”

Timpanogos scored again with 6:50 remaining in the first half, taking a 2-0 lead into the break.

The Pioneers did exactly what they needed to do to get back into the game when senior forward Kennedi Schmidt scored nine minutes into the second half. Junior midfielder Calista Wren set up the goal when she won the ball and played a long pass into space.

Schmidt caught up with the ball before it went out of bounds. She dribbled into the corner, brought the ball back a few yards to improve the angle of her shot and placed it just under the crossbar.

Now down only 2-1 with 31 minutes remaining, Lehi was back in the game.

For the next 12 minutes, both teams played hard and traded possession.

The Timberwolves were awarded and converted on a penalty kick with 19:01 left in the game. The goal gave them a 3-1 lead that they would not surrender.

The Pioneers continued to press and generate shots on goal until the final whistle, but were unable to find the net.

When asked about his favorite memory from this successful season, Graham did not hesitate.

“Without a doubt, winning Region 7! It was a very special moment. Bringing back our first region title in a decade is huge,” he said.

“The class of 2021 will be forever remembered for their leadership and how they pulled our program out of darkness. They are a special group of players for sure,” Graham added.

According to the coach, the future of Lehi girls soccer looks bright.

“I would expect the same if not bigger things next year. We return seven starters and I feel we can build on this year and keep things moving forward,” he concluded.