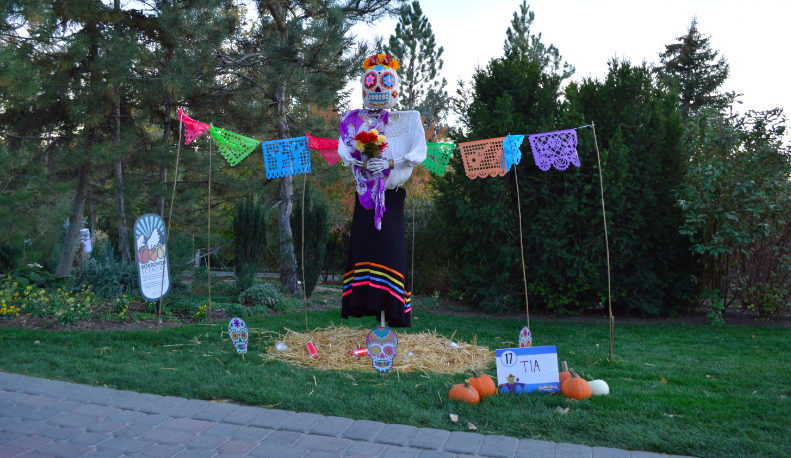 The fourth annual Scarecrow Festival at Thanksgiving Point stoked the creativity of dozens of businesses and families who built versions of their favorite characters for a chance to win big prizes and maybe scare some crows and cronies during the week of October 12-17.

According to the Ashton Garden website, “Building a scarecrow is not about perfection, it’s about being creative and having fun in the process.” They suggested pulling clothes and accessories from the donate pile to outfit a scarecrow instead. Every entry got a participation prize, but one lucky entry, yet to be named, will get a grand prize of dinner for four at Harvest Restaurant, a one-year family or grandparent membership to Thanksgiving Point and four premier passes to Luminaria.

Other lucky winners include the Judge’s Choice Award, which comes with a trophy, a Thanksgiving Point family membership and a $100 Amazon gift card, as well as first, second and third place winners chosen by Scarecrow Festival guests. The three People’s Choice Awards get Visa or Amazon gift cards and tickets to Luminaria as well.

As always, popular Halloween-themed movies like Nightmare Before Christmas and It’s the Great Pumpkin, Charlie Brown were featured as scarecrows in the garden. This year several entries had the same idea to build Pokemon scarecrows. The Mandalorian and especially “Baby Yoda” got the scarecrow-building-juices going for others.

Thanksgiving Point had to make changes to the usual activities and food vendors because of COVID-19 restrictions in 2020, but the outdoor gardens and mild weather were perfect for a Fall activity in Lehi.