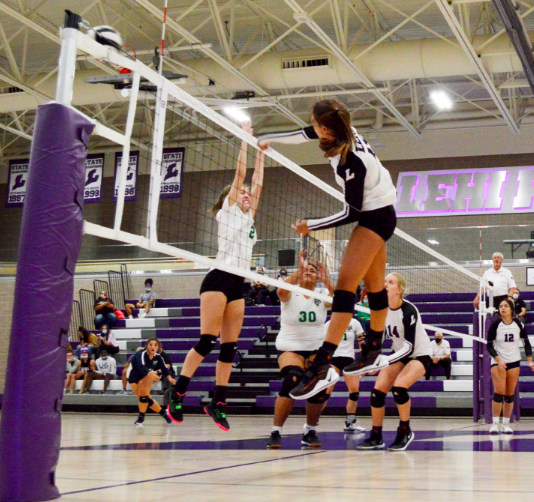 The Lehi High School volleyball team went on a three-game winning streak in conference matches against Mountain Ridge, Orem, and Timpanogos at home on Oct. 19-21. The Pioneers are ranked second in Region 7 going into the final week of the regular season.

Lehi faced the Sentinels on Oct. 19 after missing their regularly scheduled game during the quarantine period. The Pioneers lost to Mountain Ridge 3-2 in their last meeting on Sept. 15 and Lehi was ready for redemption.

The next day, the Pioneers were back on their home court to take on the Tigers. Once again, Lehi beat Orem 3-1, just as they did in their first meeting of the season on Sept. 22. The Pioneers won the first set 25-18, lost the second 26-28 and won the final two sets the identical scores of 25-13.

On Oct. 21, the Timberwolves played the Pioneers for a second time, this time on Lehi’s home court. The teams traded game wins. Timpanogos took the first set 25-20 but Lehi won the second set with a decisive score of 25-14.

The see-saw battle continued as the Timberwolves came back to win the third game 25-20. The Pioneers then closed out the match by winning the fourth set 25-21 and then the final set 15-13 for the hard-earned victory.

“We have some players who are going to miss games this week with injury or quarantine, so it will be fun to see how everyone responds and steps up,” said head coach Kolton Rader going into the final week before the state tournament.

“Our goal now is to get healthy and ready for state. We will take it one game and one practice at a time and hopefully get better every day,” Rader continued.