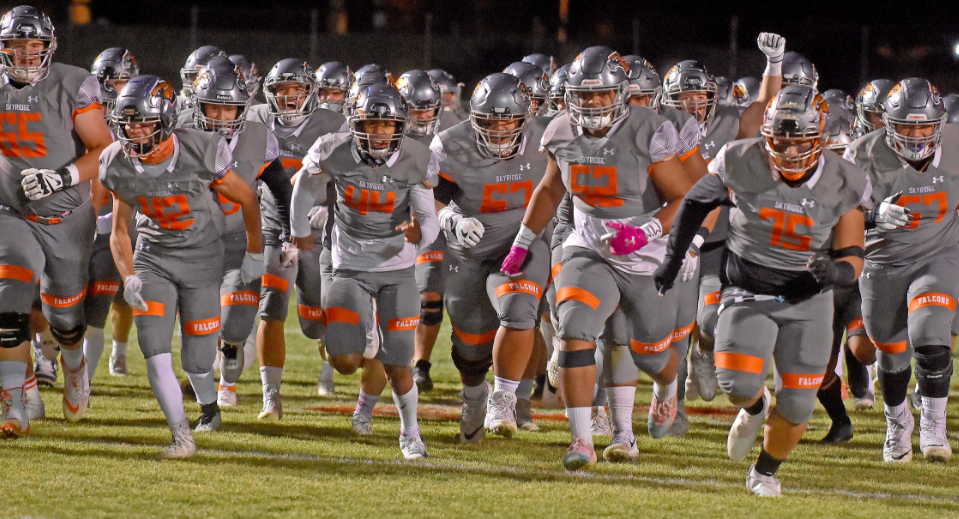 The No. 3 Skyridge football team hosted No. 11 Davis in the state quarterfinals on Nov. 6 and dominated in the second half to pull away for the 42-10 victory.

The Falcon defense forced turnovers and held the Darts to just 18 minutes of possession time and 10 total points as they posted another big state tournament win.

Falcon sophomore quarterback McCae Hillstead led the way offensively as he rushed for 72 yards and  went 18-of-29 for 342 yards through the air with three touchdowns, including a 56-yard pass to junior tight end Teagan Calton.

Skyridge junior wide receiver Jack Hadfield scored first with a 29-yard pass from Hillstead. Junior running back Jeter Fenton followed up with a touchdown on a 1-yard rush to help push the advantage to 14 points in the first quarter.

Calton was a difference maker on both sides of the ball by lead blocking for Fenton all night and was all over the field defensively, making big plays throughout the game.

The Darts came out fighting in the second quarter and scored 10 points, including a 42-yard field goal by Jackson Leaver at the halftime buzzer.

Skyridge Head Coach Jon Lehman said, “I thought Teagan Calton had a really good game tonight on both sides of the ball. Calton is a great athlete, he has a really great mindset and he is a hard worker. He is super versatile and there is a lot he brings to the table both offensively and defensively.”

“McCae and the offensive line played good,” said Calton. “They did their jobs and they executed. We had some penalty calls but that can happen. I’m feeling really happy as this was an awesome game, it was a challenge and we stepped up tonight. I love the seniors, they played their hearts out.”

The Skyridge defense executed with precision and strength. Senior safety Jackson Lambert led the team with 6 tackles and one interception. Calton had five tackles and one sack.

Dulle said, “We knew that they would be a very physical team. Their offense was balanced with 50/50 run pass and we came out with a good game plan and executed to the max.

“David Spjut leads Davis in passing yards by almost triple over the other guys. We were able to lock him down and it showed. Our physicality made a difference tonight. We came out super physical and they couldn’t match it and the defense dominated,” he added.

Lehman said, “This was a good opponent. Davis can do a lot of good things on offense and defense. It felt like in the first half we didn’t convert in the red zone and that kept the score close.

“In the second half we converted in the red zone and we got a stop in the red zone. That was a major difference in the game in giving us an upper hand and going through the third quarter and into the fourth quarter; it was just being strong in the red zone offensively and defensively,” he continued.

“Our defensive backfield played a really good game, the skill position guys did a good job getting downfield offensively and McCae threw a bunch of really nice balls,” the coach concluded.

With the win, the Falcons (10-2) move on to the semifinal playoff game scheduled for Nov. 12 where they will look to get revenge against No. 2 Lone Peak (11-1). The contest is set for 7 p.m. at Cedar Valley High School in Eagle Mountain. The Knights knocked Skyridge out of the state playoffs last year.

Pioneer volleyball exits tournament after loss in 5A quarterfinals