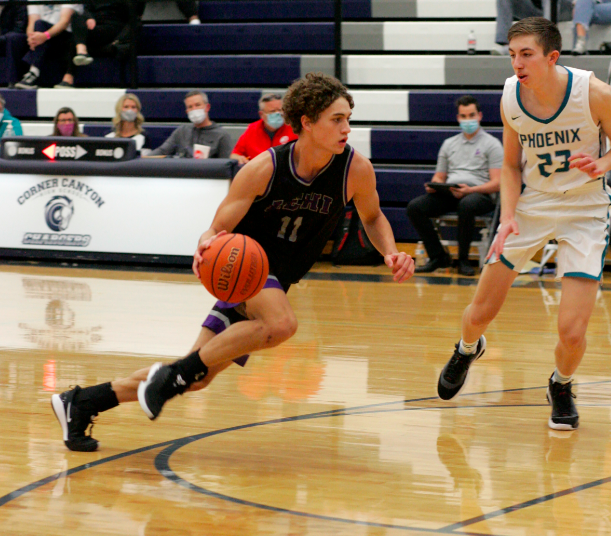 The Lehi boys basketball team got the season off to a solid start at the Corner Canyon tournament Dec. 3-5, earning a 2-1 record.

“These three games were really helpful to get things going,” said Lehi Coach Quincy Lewis. “You don’t know coming into an event like this if you’re going to get them all but playing three days in a row gives you a great shot to assess where you are at this early point in the season.”

The contest with the Thunder was close from start to finish as the teams were never separated by more than a handful of points. They were knotted at 39-all entering the fourth quarter.

Lehi senior Peter Amakasu opened the final period with a trey to give the Pioneers the lead and they maintained it for a time, but Westlake shot itself back in front at the free-throw line and was able to hang on to the narrow advantage until the end.

“Westlake’s a good, tough, physical team,” said Lewis. “We were ahead in the fourth quarter and couldn’t quite hold the lead but I thought we competed well throughout the game. Blake Hill gave us some nice baskets when we needed them.”

Amakasu led the scoring with 15 points and Hill had 13, both of them sinking 3-of-4 from beyond the arc. Senior guard Noa Gonsalves added 13 points and senior guard Tyson Hawkins had six assists.

The Pioneers got off to a fast start against the Titans. They built a 14-5 advantage in the first quarter which ballooned to 47-24 by the break and they went on to the big win from there.

“I thought we brought good energy into that game,” Lewis said. “We got contributions from a lot of players. Noa had a good game, and Lucas Madsen and Braxton Hawkins gave us good minutes off the bench.”

Schedule considerations changed the Saturday opponent, and Lehi ended up facing the second-ranked Phoenix, who boast one of the best players in the state.

A quick start again proved to be the key as the Pioneers earned a 17-3 lead before Farmington knew what hit them. Lehi led 40-19 at the break and although the margin fluctuated during the second half, the Phoenix never seriously challenged the chances of a Pioneer victory.

“I was pleased at our mental preparation coming into our third game in three days against a quality team,” Lewis said. “Peter did a nice job, on defense especially. Tyson was a great distributor and Noa  shot another high percentage from the field and had an outstanding floor game.

“Tyler Trane and Grayson Brousseau did a nice job of handling the post in this game,” the coach added. This was particularly important since the Phoenix had a significant size advantage.

The Pioneers were ranked No. 3 in the preseason but moved up to No.2 after this victory. Region 7 rival Timpview retains the top spot.