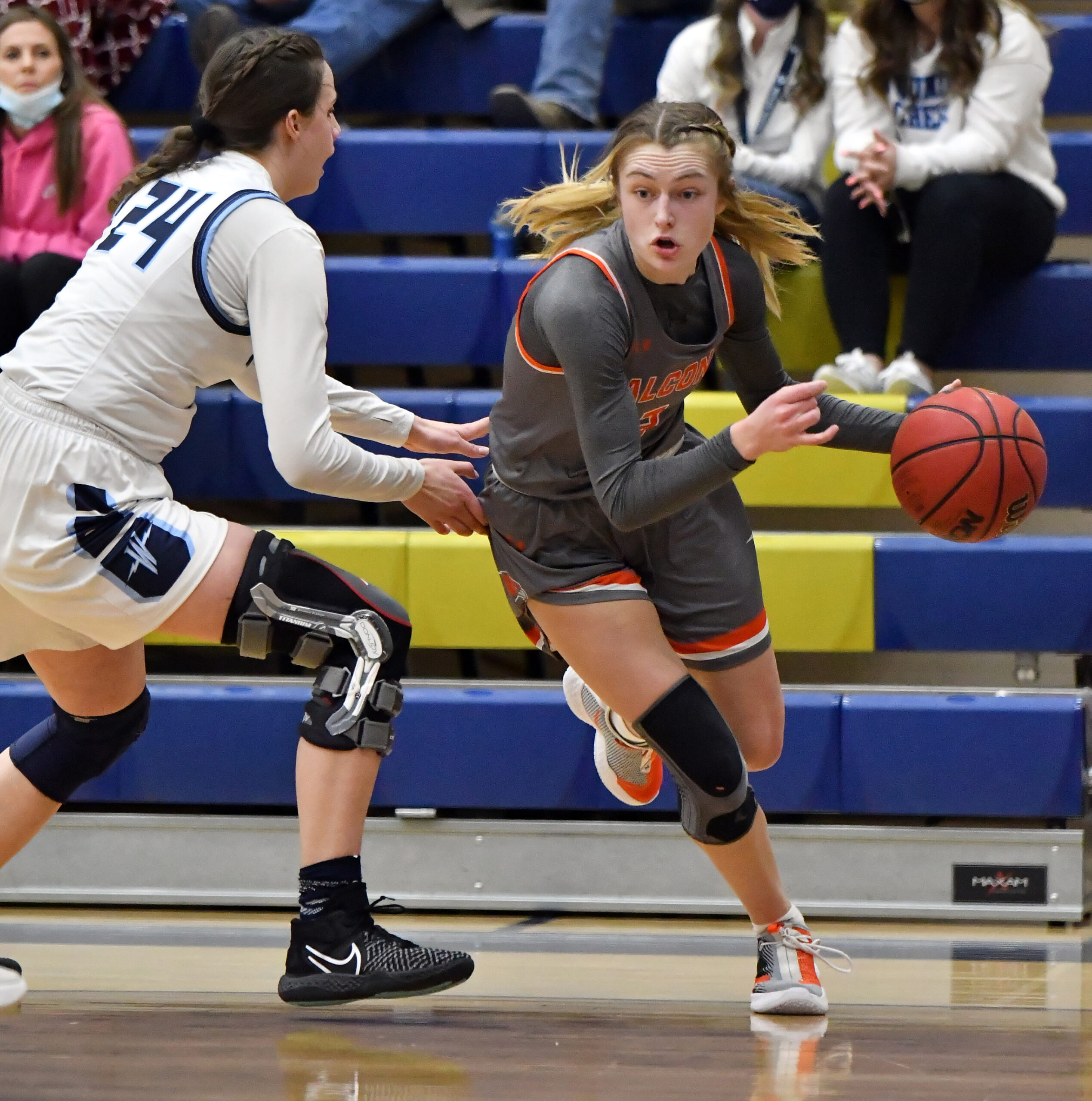 The Falcon girls basketball team split their final Region 4 games, topping Pleasant Grove on the road Feb. 16 but falling in a one-basket heartbreaker to Lone Peak on Feb. 19.

The Falcons stayed just a step or two ahead of the Vikings on both ends of the court to come up with an important league win.

“Tuesday at Pleasant Grove I was really happy with our effort,” said Skyridge Coach Shaylee Nielsen. “Our girls played very composed and showed a lot of maturity. They didn’t get rattled in tough moments and made plays when we needed them.

“Jade Wallace had a great game for us and hit four threes,” the coach added. “Our defense once again was our backbone and put us in a position to win.”

On Senior Night, the Falcons led through three quarters of a rugged defensive contest but just fell one play short at the end.

Ally Blackham scored 15 points including three triples, but no one else registered in double digits.

“We had a great start against Lone Peak and led most of the game,” Nielsen said. “I thought we did a great job slowing down Kailey Woolston and making her take tough shots.”

She continued, “Ally Blackham played amazing and showed why she is so valuable to us. She plays incredibly hard and almost never gets a break.

“We were up late in the fourth quarter and didn’t make some plays we needed to, and Lone Peak came up with some big plays,” the coach said. “It was a really tough loss for us, but we are ready to head into state and make a run.”

With the victory, Lone Peak secured the region championship and Skyridge dropped into a tie for second place with Westlake at 7-3. The Thunder were the only team in Region 4 to beat the Falcons twice.

However, with a record of 12-7 playing a very tough schedule, Skyridge edged ahead of Westlake to earn the No. 7 seed in the final state 6A RPI rankings.

“This season has been such an amazing journey and so much fun,” Nielsen said. “We couldn’t ask for a better group of girls and I am absolutely enjoying the opportunity to coach them. They have represented our program so well and have really bought into playing Skyridge basketball.

“Our seniors have been phenomenal leaders and our younger girls have been able to learn from them and develop alongside them,” she went on. “We’ve been outsized in basically every game we’ve played, and we’ve been able to win a lot of tough games due to our hustle and resiliency.”

The coach said the team is looking forward to the playoffs. “We are excited for the opportunity to host a game and will be hungry to get a win and advance,” she said.