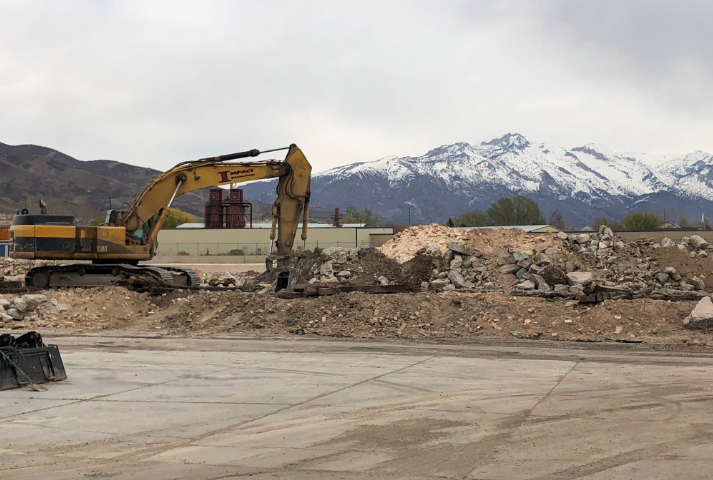 “I just couldn’t find workers, and compete with China,” said owner, Ray Worthen, of General Refractories. Worthen, who purchased the Lehi manufacturing facility in 1996, is selling the property located at the east entrance of the 1-15 at 10190 N. 8800 West. Demolition of the plant is in progress.

“In 1946, the head of the steel division of the War Assets Corporation, came to Lehi to inspect the brick plant and declared the facility surplus property. General Refractories Company of Philadelphia (GREFCO) bought the plant for $375,000. At that time, the plant included the main manufacturing building, six beehive kilns (each with 100,000 brick capacity.) a locker/shower building, office building, storage shed, machine tools, brickmaking, laboratory, and testing equipment. Wilson C. Rhone was hired as superintendent.” (Van Wagoner, Lehi, Portraits of a Utah Town.)

In 1973, GREFCO announced a $1 million dollar expansion. The new expansion specialized in direct-bonded brick wrapped in steel casing. The only other plant in the United States to produce this kind of brick was in Indiana. This brick was used in the hottest applications in making steel and glass products. Worthen explained General Refractories was the largest privately held property in Utah County.

“We shipped brick to 55 countries. Our customer base was huge. We shipped bricks to Owens Corning and Raytheon and companies that manufactured products needing our fire bricks. China started importing a similar product which could be purchased at a cheaper price. I hired attorneys to urge the federal government to protect us with tariffs, but the Obama administration was not supportive. Like everything else, China has taken over the industry,” said Worthen. “All I ever wanted was a level playing field.”

Interestingly, Worthen said he has shipped his products to China because of the higher quality of his locally made fire-proof bricks.

The sale of the property is not complete. “We are getting close,” said Worthen.

Council says “not yet” on climbing gym in Thanksgiving Point