Council says "not yet" on climbing gym in Thanksgiving Point 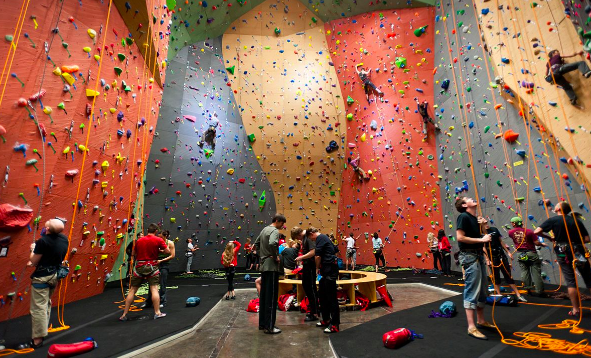 During the public comment portion of the April 13 City Council meeting, Andrew Bybee of Stack Real Estate asked the Council to approve an exception to the current development moratorium within the Thanksgiving Point area.

More than a year ago, the City Council placed a moratorium on any new development inside the Thanksgiving Point area due to traffic issues and requested a new area plan be presented to the Council. City officials anticipate the new plan to include traffic mitigation proposals and a mix of new development, including residential and commercial projects.

“We are prepared to submit a site plan for a climbing gym on the corner of Ashton Blvd and Executive Pkwy inside of Thanksgiving Point. Council has asked city staff not to process any applications inside of the Thanksgiving Point area plan. We request that you give staff permission to accept the application,” said Bybee when asking for an exception to the current building freeze.

Bybee explained Stack’s justification for an exception to the development moratorium. “Reason one [for the building pause] is because of traffic congestion. We know from the traffic studies that these types of uses [climbing gyms] are ‘off peak’ and not during office hours and do not contribute to traffic congestion. Two, we know we are going through a proposed area plan amendment in the area, but this use is approved use in the current area plan and also in the next area plan if approved. Three, it is the right kind of momentum to this transit-oriented development (TOD) area. It is bringing nightlife, and it’s a really cool development. We are just asking for a site plan review, not a building permit request at this time,” continued Bybee.

The City granted a previous exception when they approved the Dancing Moose Montessori school, currently under construction near Electric Park in Thanksgiving Point.

The other Councilors had a different view, suggesting the City finalize the new area plan before considering the climbing gym.

“For me, if we push this through, it’s just kind of like an escape from getting that area plan submitted,” said Councilwoman Katie Koivisto.

“Where are you at on the new area plan?” asked Councilman Mike Southwick.

“We have it submitted and are scheduled for design and review committee (DRC). We will be at Planning Commission in May and in front of you [City Council} in June,” replied Bybee.

“Why do you want to push this through early?” asked Southwick.

“The area is 800 acres, and this is only 1 acre of it,” answered Bybee, who reiterated that the proposed climbing gym is an approved use within the existing area plan.

“We’ve been waiting for this for a long time, and we don’t have many mechanisms to put any kind of pressure on this not taking forever. I wonder how many times we have to say ‘please’ to bringing us an updated area plan. I am with Mike and Katie on this one. I’m excited to see what you guys will bring to the table and what kind of solutions there can be. I don’t want to exacerbate the problem while we wait,” said Councilwoman Paige Albrecht to conclude the conservation.

The three opposing councilors said they would accept the climbing gym application once the Council is presented with the new area plan concept anticipated in June.