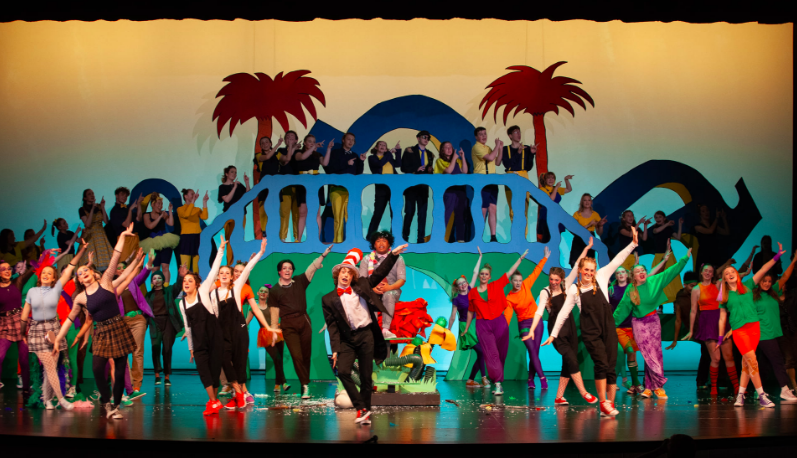 The Skyridge High School Theatre Department capped their unprecedented 2020-2021 season with an extraordinary production of “Suessical the Musical” during the first week of May. The student cast and crew carefully navigated the pandemic by rehearsing with masks and presenting gradually larger productions beginning in January 2021. With “Suessical,” audience capacity restrictions were lifted, and the community was treated to a fully immersive theater experience of the highest caliber.

“Although this year has been one of the most difficult years of my life, it has also been one of the most rewarding,” said John Brown, director of “Suessical” and head of the Theatre Department at Skyridge High School. “At times, the challenges of this theater program and its students faced seemed insurmountable, but looking back on the year now, it has been a truly great year. This show is a wonderful culmination of the students’ efforts.”

“Suessical the Musical” is an homage to many classic Dr. Suess stories and characters, bright costumes and sets, and high-energy music with rhyming lyrics. Ethan Freestone’s delightfully mischievous “Cat in the Hat” kept the audience on their toes, appearing in the audience and running around the theater singing and dancing while always narrating Horton and JoJo’s stories. Micah Cajilig brought warmth and kindness to his portrayal of Horton, along with strong, sure vocals. Ellie Shields played JoJo with boundless energy and a beautiful singing voice.

“If you’re looking simply for an escape and for pure entertainment, this show will give you what you’re looking for. But if you’re seeking something more, if you desire substance in your amusement, then ‘Suessical’ can reward you there as well,” mused Brown in a note in the program. “Suessical the Musical” dives into themes of diversity in thought and behavior, friendship, duty and loyalty, but there’s also plenty of silliness as well.

The full auditorium came to look forward to scene stealers Mac Harris as Mayzie La Bird and Bry Grant as the Sour Kangaroo. Their powerhouse vocals and onstage presence elevated the entire production. Abby Marsh as Gertrude McFuzz had the audience rooting for her as she tried to capture her crush, Horton’s attention. The crowd went nuts for Sam Brown’s appearances as The Grinch.

“While ‘Suessical’ is a musical that a year and a half ago I would’ve never considered doing, it has become one of my favorite productions that I have ever directed,” concluded Brown.

Are renowned Round-Up parades a go?