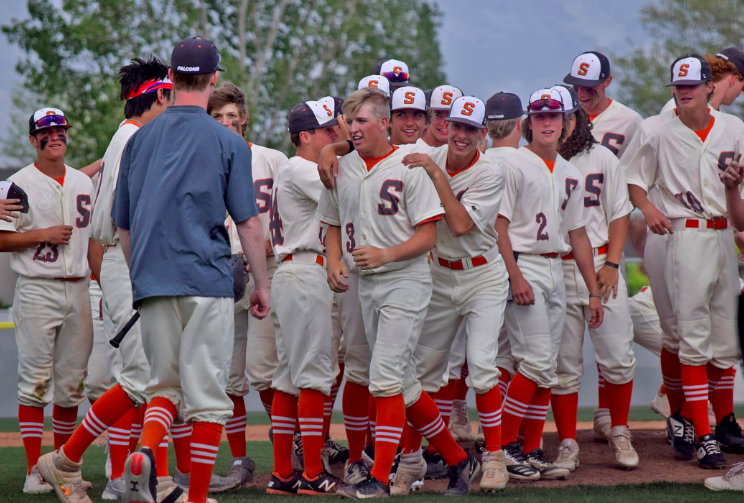 With one series remaining against Pleasant Grove, the Skyridge baseball team is fourth in Region 4 with a 6-6 record after being swept by American Fork and then beating Westlake in three straight contests.

The Falcons led 14-13 entering the top of the seventh inning in this lively contest, but they gave up two runs to the Cavemen for the lead and then were unable to answer in the bottom half of the inning.

Senior shortstop Garrett Bauer went 3-for-3 including a double and a triple, walked twice, scored four runs and drove in two more. Senior third baseman McKade Sampson hit a double and a home run, scored twice and had five RBI.

Sampson’s solo home run was the only highlight for the Falcons, who committed no errors but gave up 19 hits.

The Thunder had more hits in this game but the Falcon fielders were on their toes and didn’t allow them to put long rallies together.

The Falcons took the lead for good with four runs in the third inning. Adamson singled on a 1-2 count to drive two runs across. Senior catcher Matt Garside hit the first pitch he took to send in another, and Carter’s sacrifice fly scored the fourth run in the rally.

Holland pitched a two-hit four innings against the Thunder and sophomore Mason Thompson finished the shutout on the bump.

Bauer had another big offensive game, going 3-for-3 with two runs scored and three RBI. Ball had two hits including a double and drove in two runs. Senior Matt Earl and Carter had two RBI apiece. Eight players had hits in the game.

The Falcons won this tight contest in dramatic fashion in the bottom of the eighth inning, when Sampson hit a walk-off home run to score two to provide the winning margin. Sampson cemented the win on the mound as well, pitching 1 2/3 innings in relief and giving up no hits, runs or walks.

Bauer went 3-for-4 and drove in the other run for the victors. Young had two hits for the winners.

The game also included a special Mother’s Day tribute. Players presented their mothers with roses, there were drawings with prizes, and players came to the plate with walk-up music consisting of their mother’s favorite song.