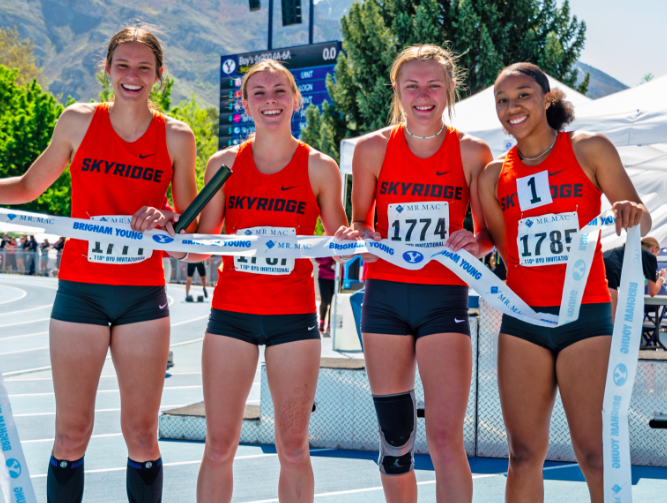 The combined Skyridge boys and girls track and field team placed fifth at the BYU Invitational on May 7-8. The Lehi team placed 25th at the meet, which featured top athletes from 95 programs in Utah, Idaho, Wyoming and Nevada.

Founded in 1911, the BYU Invitational is the longest-running and largest high school invitational in the Intermountain West.

A pair of Pioneer athletes posted the highest individual finishes at this meet. Sophomore sprinter Sarah Ballard won the 200m in 24.86 seconds. She has the fastest time in the state this year so far in this event.

Ballard also placed second in the 100m in 11.97 seconds, eclipsing Brinn Jensen’s 12.2- second school record from 2016 and registering the second fastest time in the state in this event.

Lehi senior hurdler Isaiah Tauai placed fifth in the 300m hurdles (40.22 sec). He has the seventh fastest time in the state in this event.

On the Skyridge side, sophomore Mia Kauffman took third place in the 300m hurdles (47.90 sec). Senior Tiale McGee placed fifth in the 100m in 12.17 seconds, running the fifth-fastest time in the state. Fellow senior Ally Blackham placed sixth in the 400m in 58.84 seconds.

The Skyridge relay teams had a banner meet, winning numerous events. Most notable was the girls 4x200m relay team of Regan Morris, Rachel Foster, Ally Blackham and Tiale McGee, who won the event in 1:43.40, running the second fastest time in the state this year.

With only two meets remaining, the track and field season is winding down.

Athletes from both schools who meet the qualification standards will compete at the Utah State Championships on May 18-19 at Davis High School.