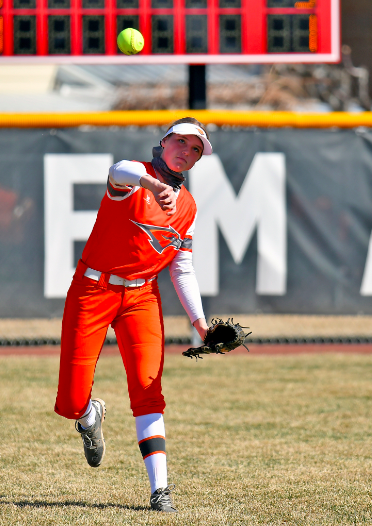 Despite losing its final league game, the Skyridge softball team secured the Region 4 crown with a 9-1 record, edging out Westlake at 8-2. After beating Corner Canyon for their ninth victory, the Falcons couldn’t be caught.

Here are some highlights from the most recent games.

The Falcons made the most of seven hits and 12 walks as they plated seven runs in the first inning and scored eight more in the next two to end the contest early.

Junior pitcher Heather Berrett threw two shutout innings and sophomore Abigail Hall finished the game in the circle. Berrett gave up one hit and the other eight batters struck out.

Freshman first baseman Taya Tahbo had a double, scored twice and drove in four runs. Junior center fielder Brightyn Turner and Hall each had two RBI and sophomore third baseman Elliot Plewe scored after all three of her walks.

The Falcons outhit the Wasps 10-7 but they also gave up runs with errors and a late rally fell just short. Sophomore shortstop Moki Maughan, sophomore right fielder Elizabeth Barnes and freshman Kadynce Barnes each went 2-for-4 and Maughan and freshman catcher Irma Medina drove in one run apiece.

Berrett threw a three-hitter and had 13 strikeouts against a single walk for the victors. Maughan went 3-for-5 and Tahbo had a solo home run.

In a game played at American Fork, Berrett went the distance in the circle, giving up three hits while striking out 12 and walking none.

The Falcons did the bulk of their damage with five runs in the second inning. Plewe doubled in three runners. Medina went 3-for-4, scored and had an RBI. Tahbo and Elizabeth Barnes each had two hits and Beck had the other RBI.

A rough pitching outing, too many errors and not enough hitting resulted in the only Falcon loss of the season in region play, but the outcome of the league race had already been decided. Plewe had a solo homer and Maughan drove in the other run for the home squad.