Utah Polynesian youth dig into culture at ‘Who Got Roots?’ 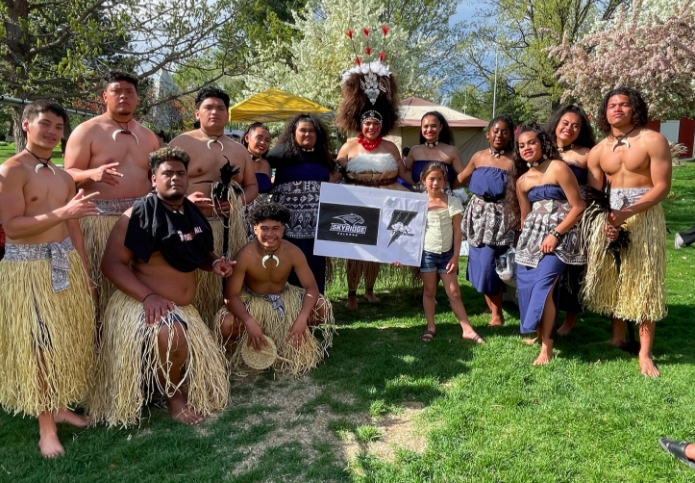 Members of the Skyridge High School Polynesian Club had only three months to prepare for the annual Polynesian dance, music and visual arts competition, “Who Got Roots?” but they channeled their ancestors and learned more about their culture alongside other Polynesian high school students in Utah.

“I wanted to unify our Polynesian group and help us be active at school and in the community, serving and representing ourselves well,” explained Malia Niumatalolo, president of the Polynesian Club at Skyridge High School.

Malia learned about “Who Got Roots?” in February 2021 when the other high school clubs had already been preparing for six months. “I felt more connected to my culture competing at ‘Who Got Roots?’ Our ancestors made so many sacrifices and told their stories through dances,” she said. Once a school commits to the competition, they draw a “wild card” Polynesian/Pacific Island to represent in the dance category, plus two other islands of their choice. Skyridge drew Marquesas Island for their wild card and chose Samoa and Fiji for their other islands.

“I never really danced growing up – this is the first time I’ve really danced. I didn’t feel connected to my culture until this year,” explained Malia. “The process of preparing for the competition definitely connected our whole club.” To do their best, the students in the Polynesian Club at Skyridge met and practiced every day, bonding and laughing for hours.

“I was really focused on football, and when that ended I didn’t have much to do here at school, so I joined the Polynesian Club. I’m Samoan and Tongan, but I don’t know much about the culture and I don’t speak the language, so I wanted to learn more and get involved,” said Stone  LAST NAME. Once Stone joined the club, other Polynesian students from the football team followed suit. “The performance was really cool,” he said. “I wasn’t nervous and I just enjoyed the music and dancing. I could feel the love.”

The Skyridge club combined with Westlake High School’s Polynesian Club for their first year at “Who Got Roots?” Westlake’s club advisers helped the Skyridge students pick music and learn their dances, as well as get accessories. A Skyridge student has an aunt who does costumes for the Polynesian Cultural Center in Hawaii, and she helped them dress for the dances.

“I was able to feel the spirit of my great-grandmother during the special dance I did as the daughter of the chief in Samoa. I was nervous and I didn’t want to forget anything, and I could feel my great-grandmother assuring me, letting me know I got this,” said Malia. “It made me really emotional, but I was so excited to feel that and perform for everyone.” Malia’s father could see his grandmother in her too.

“We started this competition out of necessity, really,” explained Haviar Tuitama Hafoka, founder of “Who Got Roots?” “The Polynesian culture and arts were disappearing – there was a lack of understanding with the youth about their culture, and none of them are speaking the languages.” The competition is in its fifth year and gaining interest every year.

“There’s been a surge of Polynesian students in Utah,” Hafoka continued. “This competition has helped them to connect and make friends while also connecting them to their culture. It’s a different, special atmosphere when it’s Polynesian kids performing Polynesian dances. They’re telling the stories their ancestors told.” Dances and songs were forms of communicating problems to government and preserving history for Polynesian cultures. “Learning this music and these dances sparks interest in their identity, and we’ve found that the Polynesian students do better academically when they are connected to their culture.”

Malia Niumatalolo graduates from Skyridge at the end of this month, but she knows the Polynesian Club will stay strong after she’s gone. “We have so much power together,” she said. “When we combine our voices and serve together, all of us are stronger.”

Are renowned Round-Up parades a go?