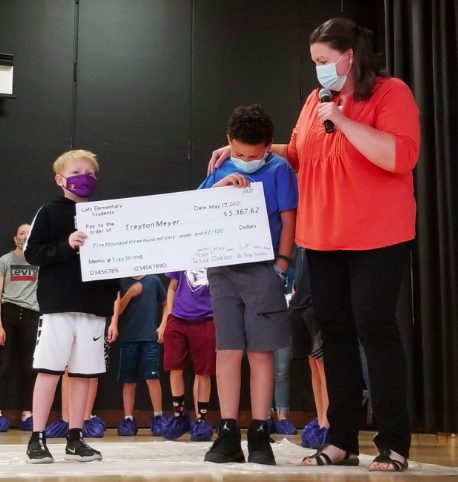 The stage at Lehi Elementary was lined with plastic and members of the student council wore paper booties over their shoes for the assembly on Monday, May 17. The students had reached their fundraising goal of $5,000 for fourth-grader Treyton (“Trey”) Meyer to help pay for medical bills in Trey’s second fight with cancer. Their reward was the messiest assembly in school history.

“We’re celebrating a couple of things today; first, that Trey is here with us,” began Principal Kerri Hundley, pausing as students whooped and cheered. “And we’re also here to celebrate the hard work and generosity of each of you. Pat yourselves on the back!”

The school presented Trey and his family with a giant check for $5,367.62, before the student council and teachers had a silly string war on the stage, which was the reward for reaching $4,500. Next, the student council took turns cracking eggs on their heads in Egg Roulette. Only eight of the 24 eggs were hardboiled, but one of the boys was disappointed to get a hardboiled egg in both rounds.

Vangie Jones, the art and music teacher, agreed to let the students turn her into an ice cream sundae if they reached the $5,000 goal. Mrs. Jones sat on a chair in a kiddie pool on stage as members of the student council poured chocolate, caramel and strawberry syrup over her head. Trey took a turn spraying whipped cream on Jones’s face as the school cheered him on. “I was not mentally prepared to be turned into a sundae!” Jones said later.

Trey Meyer was diagnosed with cancer while he was in kindergarten. He was pulled out of school and endured nine months of treatment. “He’s been doing so well, and he’s been so healthy, but he got sick again in April,” said Shantel Laird, Trey’s mother. The family was on a trip for spring break when Trey started having headaches and throwing up. Doctors found two tumors.

“It’s been really rough. He had an eight-hour surgery and he’s going to have to do chemotherapy again and maybe radiation. We don’t know yet,” continued Laird.

“To see the school come together and care about him suffering and all that he’s been through has been amazing. He knows what is coming this time, and that’s really scary,” said Laird. “Trey is so intuitive and wise for his age. He’s the one holding the rest of us together.”

Trey and his family are hoping for miracles, as doctors have told them he is on borrowed time. “He’s so grateful and feeling amazing right now,” Laird concluded.

To donate to Trey’s fight against cancer, Venmo @Shantel-Leigh.