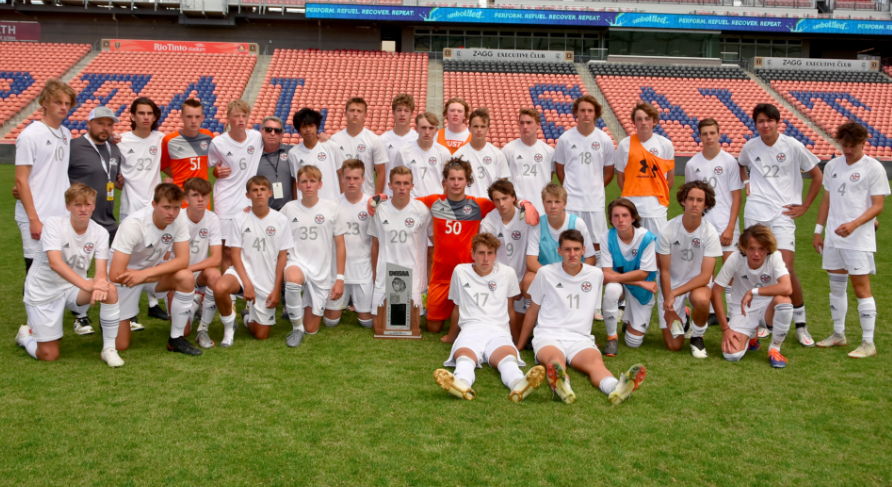 The Skyridge boys soccer team played an outstanding championship match against Weber at Rio Tinto Stadium on May 27 but lost in the shootout to finish in second place.

After a high-seed pass in the first round, here’s a look at the Falcon run through the 6A state tournament.

The Falcons jumped out early with two goals in the first half to lead 2-0 at the break. Each team added a goal in the second period, but the #18 Lancers weren’t able to get any more and Skyridge notched a comfortable win.

Senior forward Nicholas Saunders found the net twice and senior forward Jackson Warden made the other goal and provided an assist. Senior midfielder Austin Wallace and junior forward Coulson Klein each added a give in the match.

Juniors Zachary Kauffman and Cole Barker continued the season-long habit of splitting time in goal and had two and four saves, respectively.

The Falcons played excellent defense the entire match as Wallace and junior midfielder Ian Nielsen traded off scores and assists. Skyridge posted a goal in each period of a shutout shared by Kauffman and Barker over the #7 Miners.

The #3 Mustangs scored in the first period to put the Falcons in the unusual situation of having to play catch-up in an exciting semifinal.

Skyridge responded by increasing the defensive effort and the pressure up front. Warden and junior forward Andrew Parra each hit the target and Saunders made an assist to help the Falcons overtake Herriman for the win.

The Falcons were the decided underdogs entering the championship match against an undefeated Warrior squad that had given up just two goals in the previous 18 games.

However, Skyridge Coach Jerry Preisendorf knows a thing or two about playing in title games, and he had his squad ready.

The Falcons shocked Weber by scoring in the 17th minute when senior midfielder Jacob Jensen sent a shot on frame that grazed the crossbar on the way to the back of the net.

The defense rose up and protected that advantage to the halftime whistle. It was the first time that the Warriors had trailed at the break all year, but they responded by scoring in the first minute of the second period.

The squads continued to battle through 60 more clock minutes of impressive soccer, but neither team was able to break the deadlock, bringing on the shootout.

Like the flow of action during the match, the shootout went back and forth. The first tries by each team were successful.

Weber’s second try was blocked and the Falcon kicker scored, which gave Skyridge a 2-1 advantage. However, the rules require five attempts by each side, so the penalty kicks continued.

The next pair each scored. The Warriors then drew even when their kicker hit the target and the next try by the Falcons was blocked.

Weber made the fifth try and the Skyridge attempt hit the bar and went wide, bringing a thrilling competition to a sudden and dramatic close.