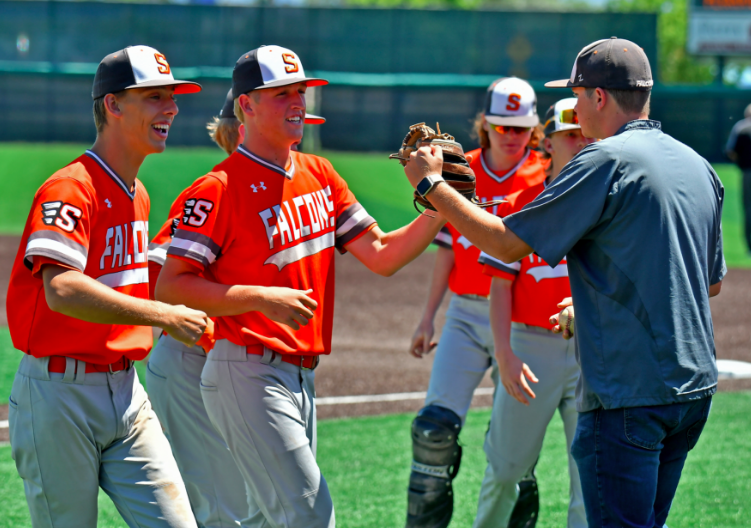 In the final series of the regular season, the Skyridge baseball team managed to win two of three games against second place Pleasant Grove to edge out Lone Peak for third place in Region 4.

They were awarded the #7 seed going into the 6A state tournament, which gave them a bye in the first round. In the Super Regional series, they were matched against #10 Fremont.

The Silverwolves shut them out the first game, but the Falcons rallied to win both games of the next day’s double-header to advance to the championship rounds.

However, their side of the bracket had two other teams from their league, #2 Pleasant Grove and #6 Lone Peak. Skyridge exited the playoffs after losing close contests to both of them. The Vikings went on to finish second to champion American Fork – also from Region 4.

Senior third baseman McKade Sampson had the only hit for the Falcons in this game as Fremont pounded out 17 hits in the upset.

The Falcons pulled out this taut contest in the eighth inning to push the series to a third game. Sampson’s sacrifice fly in the bottom of the first plated a run to give Skyridge the initial lead. The Silverwolves scored one each in the third and fourth to move ahead.

In the bottom of the fifth, sophomore left fielder Dalton Young singled on a 1-1 count to drive in the tying run. Senior shortstop Garrett Bauer, senior center fielder Mitch Adamson and senior first baseman Matt Earl each scored a run in the victory.

Sophomore pitcher Tyler Ball threw seven innings and scattered five hits. Sampson came on in relief in the eighth and retired the side to earn the win. Young and Earl each had a pair of hits in the dramatic victory.

Senior pitcher Colby Carter went the distance on the mound, giving up no runs on seven hits and striking out five to lead the Falcons into the championship rounds.

The outcome was essentially settled when Skyridge plated six runs in the bottom of the second inning. Senior catcher Matt Garside, Young, Bauer and Ball all drove in runs during this turn.

Ball and Garside each went 2-for-3 in the game with two RBI. Junior center fielder Nick Holland scored twice for the victors.

An outstanding pitcher’s duel was settled by a walk-off home run in the bottom of the seventh inning to deal the Falcons a heartbreaking loss.

Holland had a two-hitter going until the Viking batter sent one out of the yard to lead off the bottom of the seventh inning. Sampson and Ball got the only hits for Skyridge.

Both teams pitched by committee to try to get this critical win. The Falcons made the most of the eight hits they got, with Garside and Sampson providing round-trippers, but their seventh-inning rally fell just short.

Sampson also had a double and two RBI. Ball singled in two runs. Young went 2-for-3 and scored twice. Skyridge finished with a 16-14 overall record.