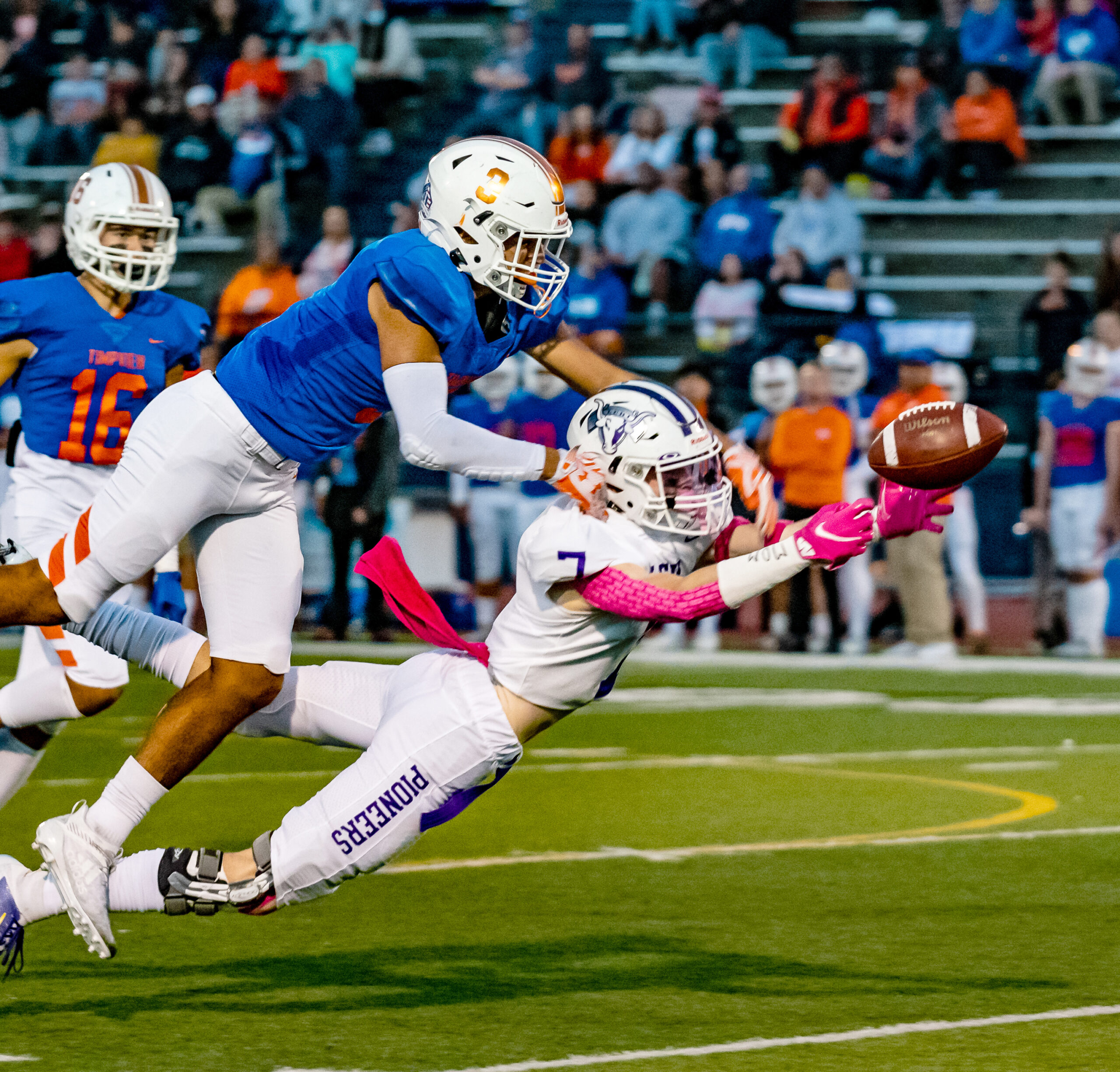 The Pioneers put up a stiff fight at Timpview on Oct. 7 but gave up three long scoring plays which ultimately allowed the Thunderbirds to secure a 28-14 victory on their Senior Night.

Timpview scored twice in the first quarter with two of those plays. The first was a 45-yard run and the second was a 36-yard pass.

After the first touchdown, Lehi drove to the 24-yard line but was unable to convert on a fourth-down try and gave the ball back on downs. The Thunderbirds got their second score on the ensuing drive, and it looked like it might turn into a long night for the visitors.

However, the Pioneer defense made some adjustments and managed to contain the explosive Timpview offense for more than two quarters.

Two terrific interceptions during the second period helped the Lehi cause as senior River Moore and junior Kadiyon Sweat each snagged one to slow the tide.

In between those two picks, the Pioneers again reached the 24, only to turn the ball over on downs once again after a second foiled fourth-down conversion attempt. A sack by junior defensive end Isaac Terrell helped to keep the Thunderbirds out of the end zone on their final possession of the half.

Lehi got the ball to start the third quarter, and this time they were able to march down the field and get on the board with a 3-yard pass from junior quarterback Jackson Brousseau to senior wide receiver Jaxon Christensen.

Senior kicker Zane Goodrich made good on the PAT to narrow the home school’s advantage to 14-7 with eight minutes still left in the period.

Next it was Timpview that gambled on a fourth-down try and they didn’t get it, so the Pioneers were gifted a short field to work with at the Thunderbird 35.

It took just two minutes for Brousseau and Christensen to connect for a 12-yard score to draw the teams even in the contest at 14-all.

It took about that same length of time for Timpview to respond with another long pass play to take the lead for good before the end of the third quarter. The Thunderbirds scored once more on a short run midway through the fourth to complete the tally for the evening.

Despite the loss, Lehi proved it could compete and deserves its high ranking. The Pioneers had some trouble moving the ball on the ground except for junior running back Carson Gonzalez, who picked up 87 yards on eight carries. He also had five catches for 39 yards.

Lehi did have a respectable passing game, completing 24 attempts for 200 yards using nine receivers. Brousseau still completed 58.5 percent of his attempts despite facing an oversized line and some very fast defenders, not to mention being sacked seven times.

Nevertheless, the Pioneer defenders were the unquestioned stars of this effort. Junior outside linebacker Hema Katoa was everywhere, making two solo tackles and sharing 15 more along with two hurries. Senior linebacker Tristan Royce had two solo and eight assisted tackles.

The defensive backs had another superlative outing. Sweat and junior Nathan Anderegg had three solo tackles apiece along with seven and four assisted tackles, respectively. Moore had two solo and three assisted tackles.

“I loved how hard my players played in all three areas,“ said Lehi Coach Ed Larson.  “I was especially proud of my front seven defensively. We needed to execute better on the offensive side to beat a very good Timpview team.”

The Pioneers finished out the regular season at Orem yesterday (Oct. 13). The state tournament bracket will be revealed on Saturday (Oct. 16) with first-round games beginning at home sites on Oct. 22.