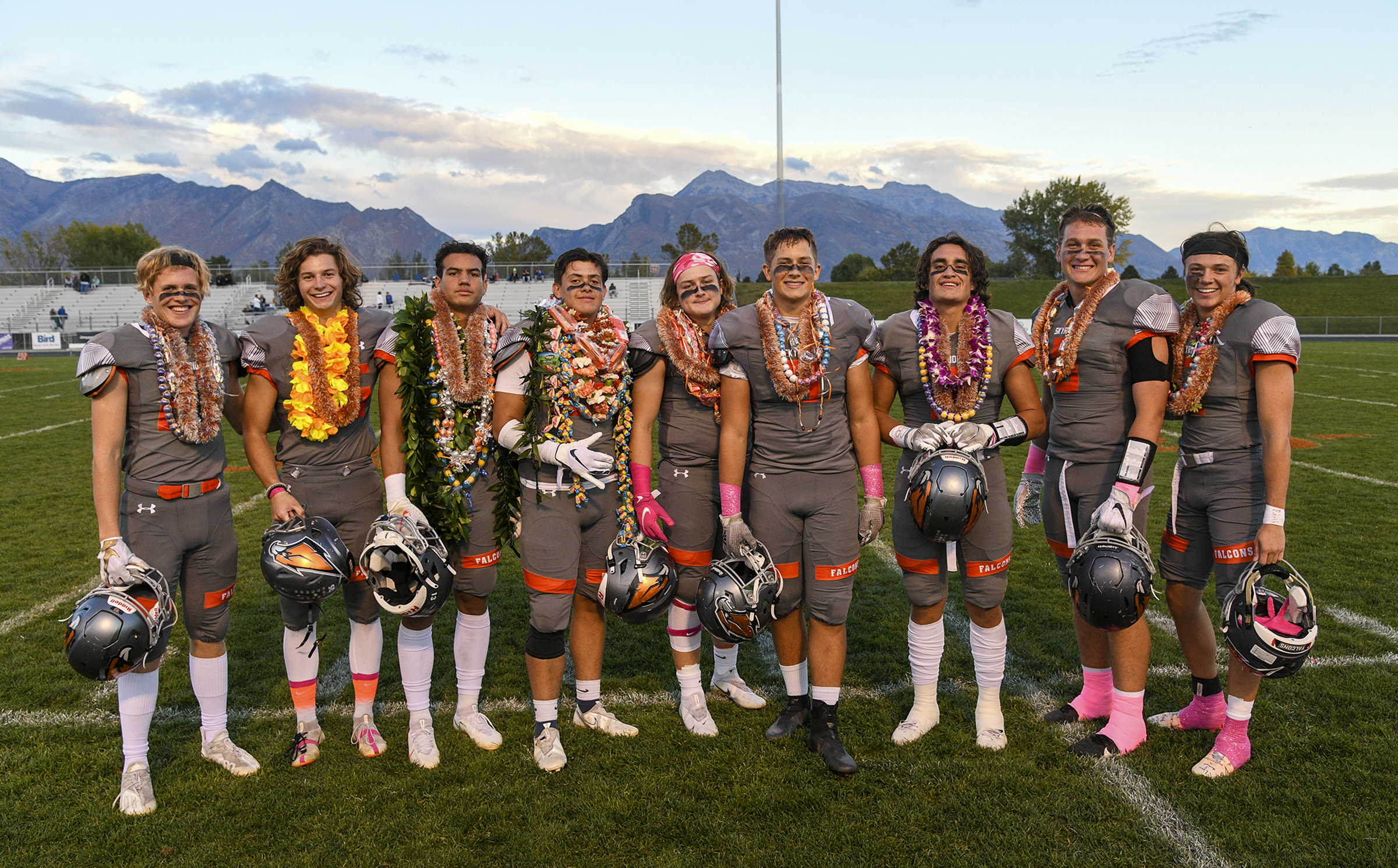 The Falcons scored early and often enroute to a 24-0 halftime lead and defeated the Vikings 31-0 on Oct. 7 for Senior Night.

The win along with Corner Canyon’s loss to Lone Peak now leaves Skyridge in a three-way tie on top of Region 4 heading into the final week.

Hillstead led the offense in dominating fashion against an overmatched and very young Viking defensive squad. Running back Jeter Fenton reliably had 17 carries for 86 yards, helping to burn the clock and shorten the game.

Hillstead carried the ball 10 times for an eye-popping 172 yards. He was also 8-for-21 passing for 119 yards and three touchdowns.

Skyridge Head Coach Jon Lehman said, “We didn’t play a very disciplined game though our guys did make big plays. I think McCae made some nice throws and made some good decisions. But we did not play a really disciplined game on the field and that is what we need to work on going forward.”

Senior wide receiver Connor McAllister said, “We did not play our brightest tonight. We had a lot of penalties; we need to be better. Our defense is playing well and can keep locking teams down and our offense is stepping up and making big plays.”

Junior running back Tate Walker said, “It felt good being on the field tonight. Our O-line played well. We could be better, and we need to play like the team that we are. Tonight was not our best outing. If we play with more discipline, we will be back on our game.”

Hillstead said, “This was a good 31-0 region win. I don’t think we executed our play tonight and we weren’t disciplined and got a few flags tonight, which we struggled with. We walked away out of the red zone with no points. This is something we can improve on.”

Junior defensive end Tausili Akana, senior defensive lineman Matt Taylor and junior defensive back Smith Snowden also put up impressive numbers while limiting the Viking offense throughout the game. The Falcon defense remains dominant on the field as this is their fifth shutout for the season.

Snowden said, “We had a little slower start but pulled it together and played well on offense and defense. We need a little more focus and we need to do our jobs and not try to do more. We will work hard this week and prepare for the next game.”

The Falcons overall played well despite their penalties and mistakes. It was a great region win for senior night.

“I love this senior class and I want to honor them; I love the way they compete. I’m proud to coach them,” said Lehman.

Senior tight end Teagan Calton said, “I’m happy we got the win,but we obviously have some more work to do.”

He added, “This season has been awesome. I love playing football for Skyridge and with these coaches. Coach Lehman is great, and this program is the best.”

Skyridge will compete in their final region game on Wednesday, October 13 as they take on the Cavemen at American Fork.