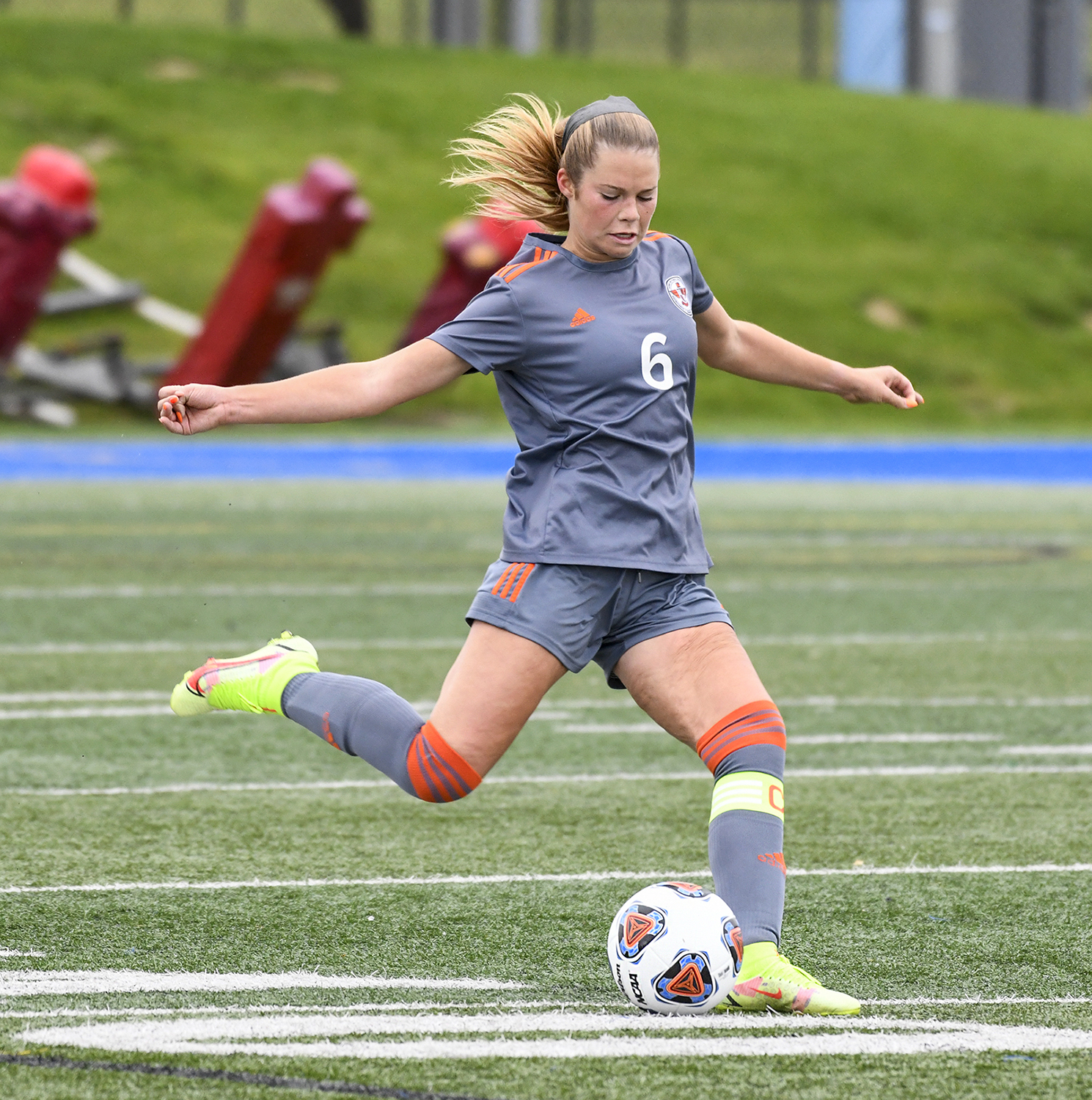 The #5 Skyridge girls soccer team fought through a tensesemifinal battle with #8 Syracuse on Tuesday (Oct. 19) but prevailed after a shootout to earn a berth in the 6A final on Friday at 11 a.m. at Rio Tinto Stadium in Sandy. The Falcons (13-5) will face off against #2 Riverton (18-1) for the 6A championship.

In last week’s quarterfinals, the Titans upset top-ranked Lone Peak 2-1 to advance to the semifinal contest, so there was no reason for them to think they couldn’t compete. Both teams showed grit and determination throughout the match, despite the cold and damp conditions.

The first goal was scored by Skyridge senior Olivia Barlow in the 34th minute as the ball was bouncing around in front of Syracuse’s goal. The 1-0 advantage held up through the break.

The Titans tied things up 15 minutes into the second period, sparking an offensive flurry. The Falcons answered four minutes later when freshman forward Kalena Bellini hit the target from the left wing, but Syracuse knotted things up again one minute later.

After that, the teams played 40 more minutes – to the end of regulation and through two overtime periods – without either one being able to break the deadlock, bringing on the shootout.

It was then that Skyridge decisively claimed the victory. Senior midfielder Olivia Driggs, sophomore forward Amanda Caswell, Bellini and junior midfielder Addi Arnell all scored penalty kicks in the initial round of five, but what happened between the pipes on the other side was the key.

Sophomore keeper Emalynn Levingston was what stood between the Titans and victory, and she proved up to the task. “For the second game in a row, she had a phenomenal game and came through for us in our time of need with two PK blocks to seal the win for us,” said Coach Toby Peterson.

The Falcons won the shootout 4-1.

“Syracuse was physical and wasn’t going to just hand us this game,” he continued. “Every time we took a lead, they responded accordingly.

“It is hard to tune out physical play and a loud fan base, but Skyridge was able to do it today and stay focused,” Peterson said. “Our attack was relentless, and our defense once again was what made the difference for us.”

The coach knows his team is the underdog going into Friday’s match.

“We played Riverton in preseason and went into overtime with them,” he said. The Silverwolves prevailed 2-1 in that contest.“We know they’re going to be fighting just as hard for the win because both of us have worked too hard to just hand it over to the other side.

“With that said, if we can play our game by possessing the ball, making creative runs in the final third, and avoid the drama associated with big games, we should have a good shot at meeting our season goal,” the coach concluded.