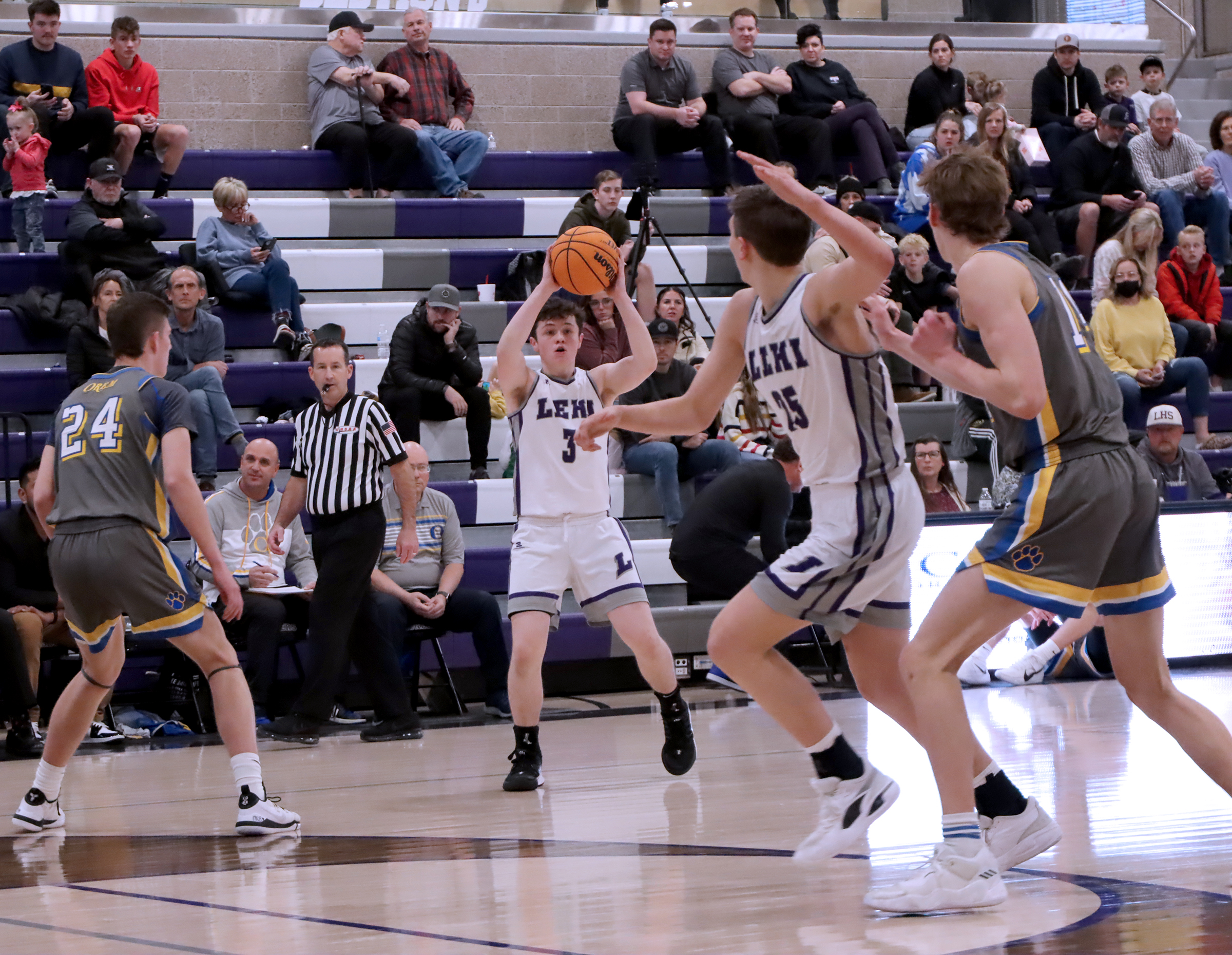 The Lehi boys basketball team played then-No. 1 Orem to within single digits and earned a tough win on the road at Jordan in Region 8 action last week.

The Pioneers won the tip and scored when sophomore forward Grayson Brousseau fed the ball inside to junior center Nixon Ruffner for an easy deuce and the action went back and forth for the first five minutes.

However, the Tigers ended the period with 13 unanswered points to take a 20-6 lead. Leh immediately started to reduce the deficit as junior forward Preston Varner came off the bench to score the first five Lehi points of the quarter with a triple and a layup.

Brousseau canned a pair of treys to help the home squad reduce the gap to 22-30 at the break. Each team scored 32 points in the second half as they dueled to the finish. The Pioneers twice cut the margin to four points during the final period but couldn’t quite get over the hump.

The team shot 51.3 percent from the field for the night and hit 6-of-11 (54.5%) of their attempts from long distance. They had 16 assists on 20 field goals plus eight steals with just eight turnovers, but Orem shot even better and won the battle of the boards.

Brousseau finished with 15 points on 6-of-7 shooting (85.7%) and made five assists and a couple of steals before fouling out. Sophomore point guard Cooper Lewis also scored 15 with four assists, three steals and no turnovers.

“We fought to get back in the game after a slow start and gave ourselves a chance to win in the fourth,” said Lehi Coach Quincy Lewis. “I was proud of our effort.”

Things did not get off to an auspicious start against the Beetdiggers, who went up 8-0 to begin this contest. However, Lewis the player was having none of that as he scored 23 of the 33 points the Pioneers boarded during the rest of the first half.

Lehi led 15-11 at the end of the first quarter after a 15-3 spurt following the slow beginning and built a 33-22 advantage by the break, which held up through an evenly-contested second half.

Lewis finished with 30 points including 5-of-6 (83.3%) from long distance and also had four boards, four steals and a block. Varner had another productive outing with 10 points and three rebounds, while junior guard Braxton Hawkins scored nine with five rebounds and four assists.

The Pioneers hit 11-of-17 (64.7%) of their triples with six players contributing to that total and seven scoring overall with eight getting boards in the game.

“Cooper really carried us offensively in the first half,” said Coach Lewis. “He played very well. I was pleased with our balance in the third quarter, when Preston, Grayson, Bryson and Nixon all made threes.

“We also had great contributions from Spencer and Braxtonalong with our bench,” he added. “I like where this team is mentally right now.”

The Pioneers will conclude the regular season next week. They play a twin bill at Timpanogos on Tuesday (Feb. 15) with varsity game times of 5:15 p.m. for the girls and 7 p.m. for the boys. The boys will host Timpview on Friday (Feb. 18) for Senior Night at 7 p.m.