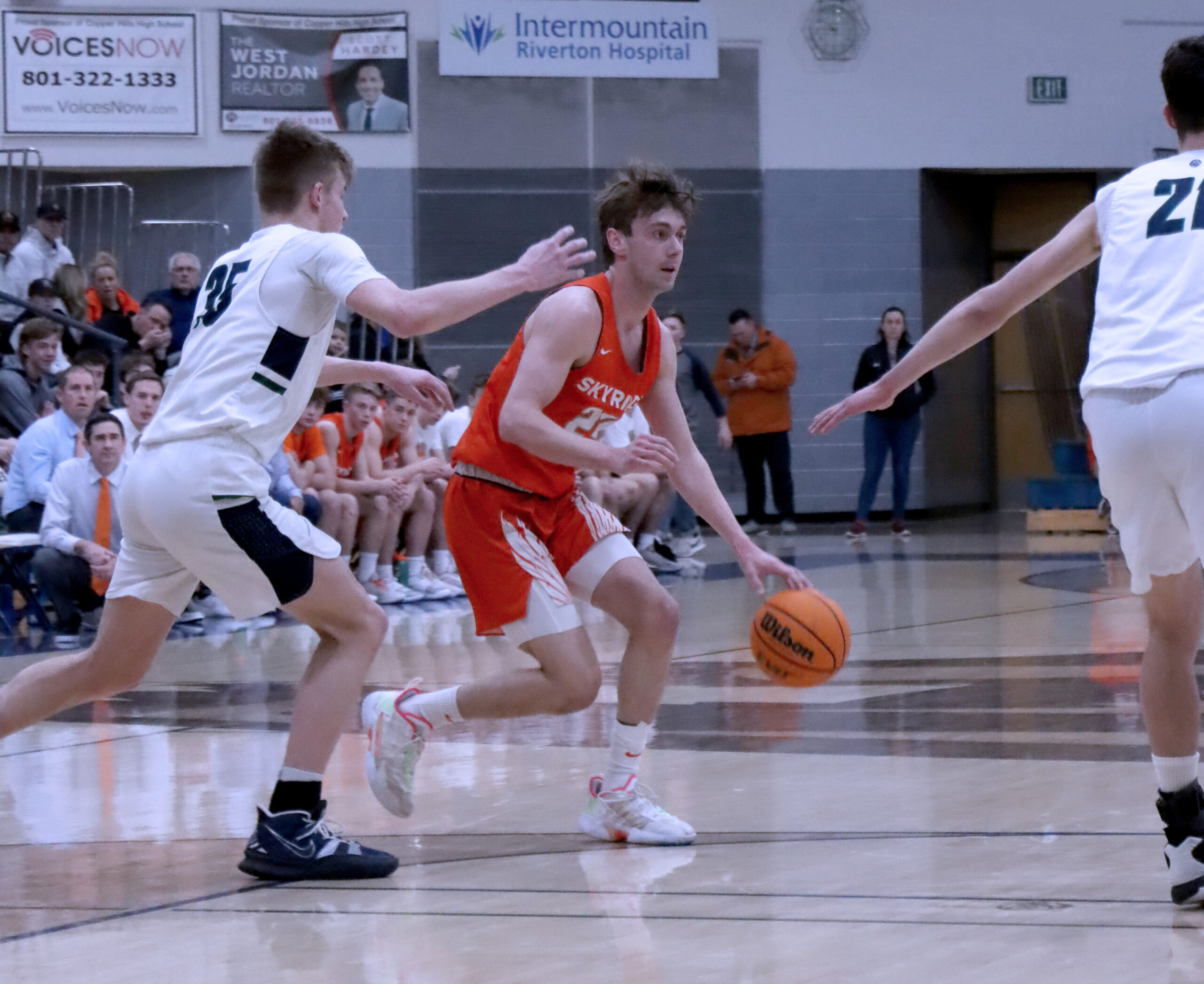 The #11 Skyridge boys basketball team played rugged defense and converted offensively in the clutch to pull out a 56-55 nailbiter over #6 Copper Hills on the road in the second round of the 6A state tournament on Friday (Feb. 25).

Both student sections were rocking throughout the contest, which featured a dramatic and frantic final minute.

When Falcon senior guard Nick Holland hit a pair of free throws with exactly 60 seconds left on the clock to give the visitors a 54-47 advantage, it looked like the game was all but over.

It wasn’t. The Grizzlies hit a triple seconds later to immediately cut the lead. With 44 seconds to go, Holland got two more points at the charity stripe. Back on the other end, Copper Hills missed the front end of a 1-and-1 but got the rebound and eventually another trey.

That made it 56-53 with 32 seconds to go. The Grizzlies fouled intentionally but Skyridge missed both shots and Copper Hills grabbed the board and eventually converted with a tough reverse layup and a foul call with 17 seconds remaining.

However, that extra shot too was missed but the Grizzlies retained possession. After the home team used its last time out because they couldn’t in-bound the ball, the Falcons came up with it after a mad scramble on the floor and used their own final time out with five seconds left.

Another intentional foul sent Skyridge to the line with the same fruitless result, but with only three seconds on the clock, Copper Hills had just one last shot and the half-court heave fell short as time expired and the Falcon fans poured out of the stands to celebrate with the team on the court.

“What a fantastic game,” said Coach Jeff Gardner. “I’m so happy for my team. We’ve had to deal with a lot of adversity this year, but they did a great job of fighting through it. I’m just so proud of them.”

The Grizzlies got the early advantage beginning with a steal leading to a crowd-pleasing dunk to open scoring, but Skyridgecaught up after the first five minutes and led 15-11 at the end of the first quarter and 25-20 at the break.

A triple by senior forward Colby Carter and a defensive rebound by senior forward Bryson Bailey leading to a rugged deuce by junior forward Josh Davis stretched the margin into double digits early in the second half, but Copper Hills responded and the lead was just three points entering the final quarter.

Bailey tallied a double-double with 13 points and 12 boards and was a menacing presence in the paint throughout the contest. Holland finished with 18 points including a perfect 9-of-9 at the line and also made five assists as he did an exceptional job of controlling distribution despite relentless pressure.

Carter added 15 points with three treys and Davis contributed eight points on 80 percent shooting along with his outstanding defense in the paint.

“The defense battled hard all night,” said Gardner. “They also took care of the ball at the end of the game. We missed some free throws late but we had built enough of a cushion that it didn’t hurt us.

“Nick Holland hit some critical free throws and handled the ball exceptionally well at the end,” the coach added.

Check our site online for the outcome of that contest.