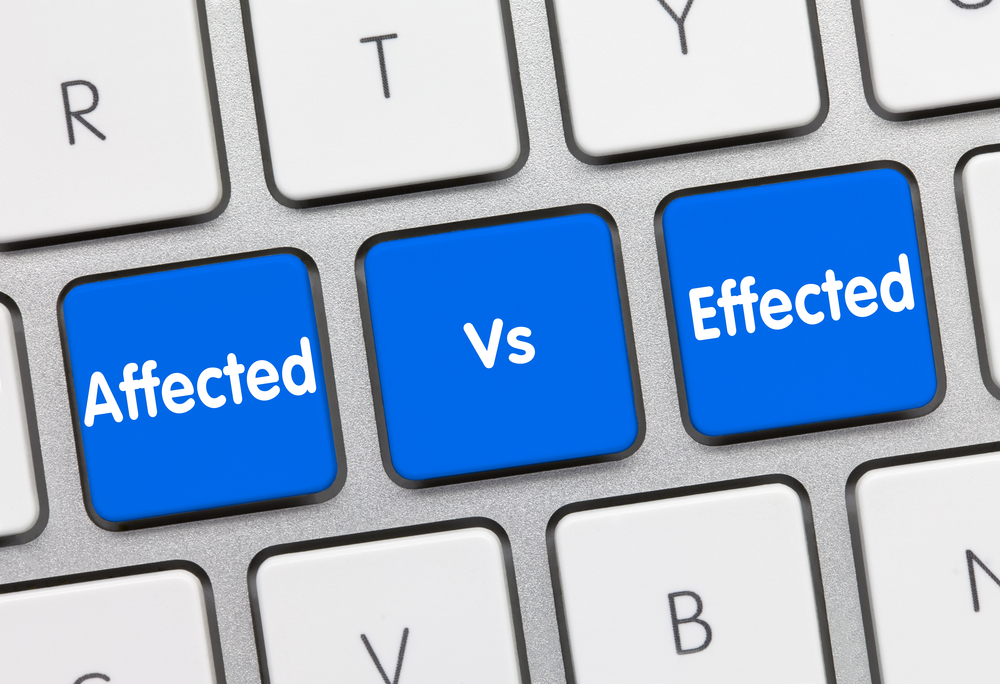 How often do you find yourself mixing up the use of the words “affect” and “effect” while you are writing?

This is a common error that occurs in the complex jungle of the English language because both spellings sound similar. Still, ultimately they both mean very different things that can get lost in translation.

The quick and easy version of understanding affect vs. effect goes something like this:

Affect is typically a verb, and its definition is: to impact or change.

Effect is typically a noun, and its definition is: the result of a change.

There is even the catchy acronym RAVEN that you can use to remember affect vs. effect:

Those are the basics, but there are particular situations that can mix us up when they break the usage rules for these words.

Let’s get to the bottom of the confusing affect vs effect debate to make sure that you are using these two different spellings with the proper meaning that you intend in your writing.

Causes of the Affect and Effect Confusion

The root of much of the dizzying confusion connected to affect and effect stems from these two words having a shared Latin ancestor, the verb  facere, which means “to do” or “to make.”

Now let’s go a step further and identify the fact that “affect” in the English language derives from the Latin verb afficere, which means “to do something to” or “to have an influence on.”

Furthermore, “effect” descends from the Latin verb efficere, which means “to make” or “to carry out.”

With that linguistic history lesson freshly in your mind, it is understandable how two English vocabulary words that are spoken in the same manner can have different meanings.

For the most part, sticking to the core guideline of effect being a noun and affect being a verb is a fairly clear road map to get the usage of both words right when those situations arise in your writing.

The Difference Between Affect and Effect

As we have previously stated, affect is a verb, and effect is a noun; but these rules should be prefaced by saying, “most of the time.”

For example, if Roy carries his baby son Thomas into a bathtub with water, Roy affects where Thomas is located, and Thomas being wet is the effect of Roy’s action of putting him in the bathwater.

Roy performed an action that signals the use of the verb: affect. The result (effect) of that verb is “wetness,” a noun that is probably causing Thomas to feel wet instead of dry as he was before being in the bathtub.

Affect and effect are different parts of speech, and when sound-alike pairs like these become tricky because they are pronounced as homophones in the same way as similar sound-alikes like write/right, here/hear, and bear/bare get pronounced.

When to Use Affect

Now that we have established that “affect” means to influence or produce a change in something, let’s examine some correct use cases and tips.

The blizzard affected residents within seven miles of Detroit.

The medication will affect your vision for about an hour.

Scientists and governing agencies consider how sustainable development affects the environment and its place in deciding future environmental issues.

The amount of gravity affecting an object on Earth depends on the object’s mass being attracted and the distance between the objects.

A is for action. Verbs are action. Affect begins with an A. Therefore, it’s a verb.

People can be affected by an event, which often means the effect is on the level of emotional and psychological.

When to Use Effect

Effect is a noun, and its definition is: the result of a change. Therefore, if you will feel the effect of an event if it affects your life,

The effect of the blizzard was tumultuous for residents.

You’ll feel the effect of the aspirin in the next fifteen minutes.

Melissa’s home run hit during the baseball game had an effect on her confidence.

Exceptions to the Rules for Affect and Effect

Effect as a Verb

Effect used as a verb means: to bring about (usually paired with nouns like “change” or “solutions”:

The local organizations worked to effect positive change in their neighborhood.

Affect as a Noun

The hospital patient had a flat affect throughout their therapy.

Affected as an Adjective

Affected can get used as an adjective in certain instances, such as when it means artificial, pretentious, or designed to impress.

Keep in mind that this usually wouldn’t be a compliment, such as when someone is acting stuck-up.

Discover How NFTs are Changing the World of Crypto