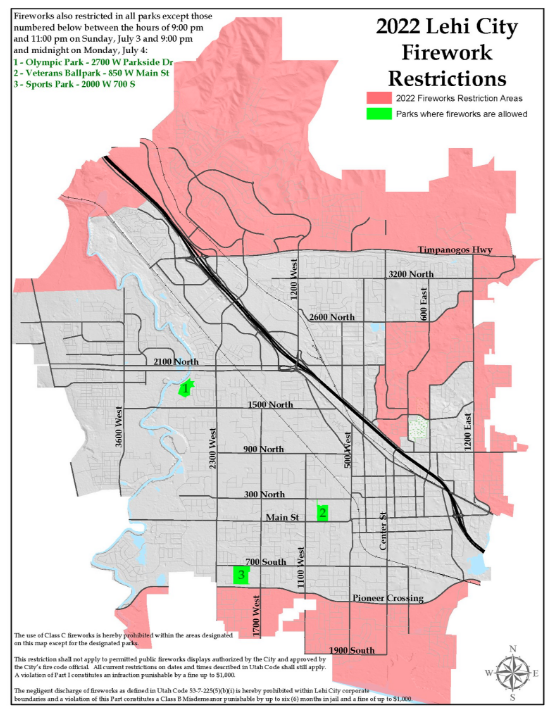 After taking a year off in 2021 due to increased fire danger, the annual Lehi tradition of waking up to cannon salutes on the 4th of July is back.

“We’ve ordered [cannon] salutes this year. We will be mindful and strategic where we light them off. We will set off 20 of them and make sure it’s super safe. It’s a good tradition to move forward with,” said Lehi Fire Chief Jeremy Craft.

Craft said fire danger continues to be high amidst the ongoing statewide drought, but the Fire Department will adjust the cannon tradition slightly to ensure fire safety. The cannon salutes are usually done randomly throughout town on streets and intersections. This year the salutes will be at predetermined school and church parking lot locations.

Firework restrictions will be like 2021 when the City Council unanimously voted not to ban fireworks entirely. This year there will be a slight loosening of the restricted zone to allow firework discharge west of the Jordan River, which was not permitted last year.

“I feel like we can open west of the river. The corridor down the river makes me a little bit nervous, but I think there is enough awareness out there that people are pretty cautious. With all the development out there, I don’t think anything can get away from us if we place our resources properly,” said Craft.

Restricted areas include everything north of SR92, south of Pioneer Crossing, and the east Dry Creek Area.

The City will also open the following parks to allow residents to discharge fireworks:

The designated parks will have a fire engine and crew on site for the discharge times of 9 p.m.-12 a.m. on July 4.

Chief Craft also said the Fire Department would have water buckets and a dumpster at each park site for residents to dispose of used fireworks safely.

Penalties for violating firework restrictions include up to six months in jail, a $1,000 fine, and restitution for any financial losses to the City or property owners.