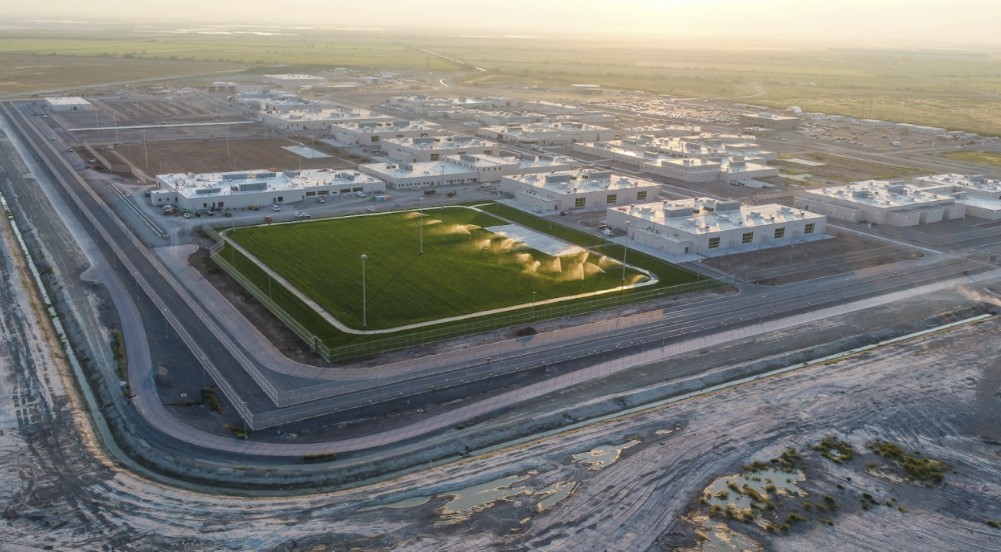 A ribbon-cutting ceremony was performed at the new Utah State Prison site last week, commemorating the completion of a mammoth project that started more than six years ago.

“It was certainly worth it,” declared Governor Spencer Cox on Wednesday.

The new prison is one of the costliest building projects in state history. With a price tag of nearly a billion dollars after multiple cost overruns and several delays, officials held a ceremony last week to celebrate the completion. There were challenges with the nature of the property itself, along with construction labor shortages (the jail was competing with the neighboring new Salt Lake City International Airport project), tariffs, and escalating building materials prices. Despite COVID-19 and an earthquake, almost 1,500 people worked to construct the new facility.

“Absolutely worth it,” said Utah State Senate budget chairman Sen. Jerry Stevenson, R-Layton, who sat on the site selection panel for the new location. “I believe those of us on the inside were aware of what was going on with the previous jail site because of the increasing value.”

The Draper facility will be demolished. It is located near the Point of the Mountain on outstanding real estate. State officials determined that the Draper facility, completed in 1953, was reaching the end of its useful life. The new location provided a chance for a transformation, particularly as the legislature pursued criminal justice reforms.

According to some observers, the lower-profile jail site merges in better with its surroundings. The design places a greater focus on rehabilitation rather than imprisonment.

“Our employees will have greater engagement with folks who reside here and who are jailed,” said Brian Nielson, executive director of the Utah Department of Corrections. “This institution also includes programming, education, medical, and mental health services. Those were planned ahead of time. Those aren’t things that were tacked on afterward.”

By the end of the summer, inmates will be transferred. Due to security concerns, the Utah Department of Corrections has declined to disclose the exact dates inmates would be transported to the new institution.

The new Utah State Prison, made up of 35 separate structures, is spread over 200 acres of land and has novel features such as dorm-style housing and personnel working in cell units. The facility includes a lot of natural light, which the previous location lacked.

“When you go inside some of our present housing units, you don’t know whether it’s daylight, dark, midnight, or midday. You have no idea if it is snowing, pouring, sunny, or anything else,” Nielson said.

House Speaker Brad Wilson, R-Kaysville, objected to a “dead end” sign immediately outside the prison gates during his comments at the ribbon-cutting event on Wednesday.

“The whole point of putting a billion dollars out here was to assist and guarantee that this facility is not a ‘dead-end’ for the 95 percent of individuals that come out here and leave here,” he said. “It’s in our and their best interests that this jail and institution be not a dead end, but rather a location where people may click the reset button and depart better than they came in.”

Governor Spencer Cox agreed and personally removed the sign after completing a visit.

The process of selecting a site for the jail was contentious, with locals actively protesting anytime the site selection team visited (some lawmakers said they even got threats over it). State officials eventually chose a location west of Salt Lake City International Airport.

Sen. Stevenson believes it will benefit the city in the long run.

“This will turn into a gem for Salt Lake City,” he said. “It will because of what is going on surrounding this location. The transformation that will occur here. Manufacturing, in combination with the inland port, is hoped for.”

Work on a facility that would be part of the broader inland port project was already underway just outside the jail gates. Driving east into the city, large warehouses dominate the landscape. The state paid for the area’s infrastructure and anticipates that future development will repay part of its investment.

The sale of the former prison site in Draper will result in a great windfall for the state.

“Which will be a significant and unique opportunity for our state, a multi-generational opportunity,” Gov. Cox stated.