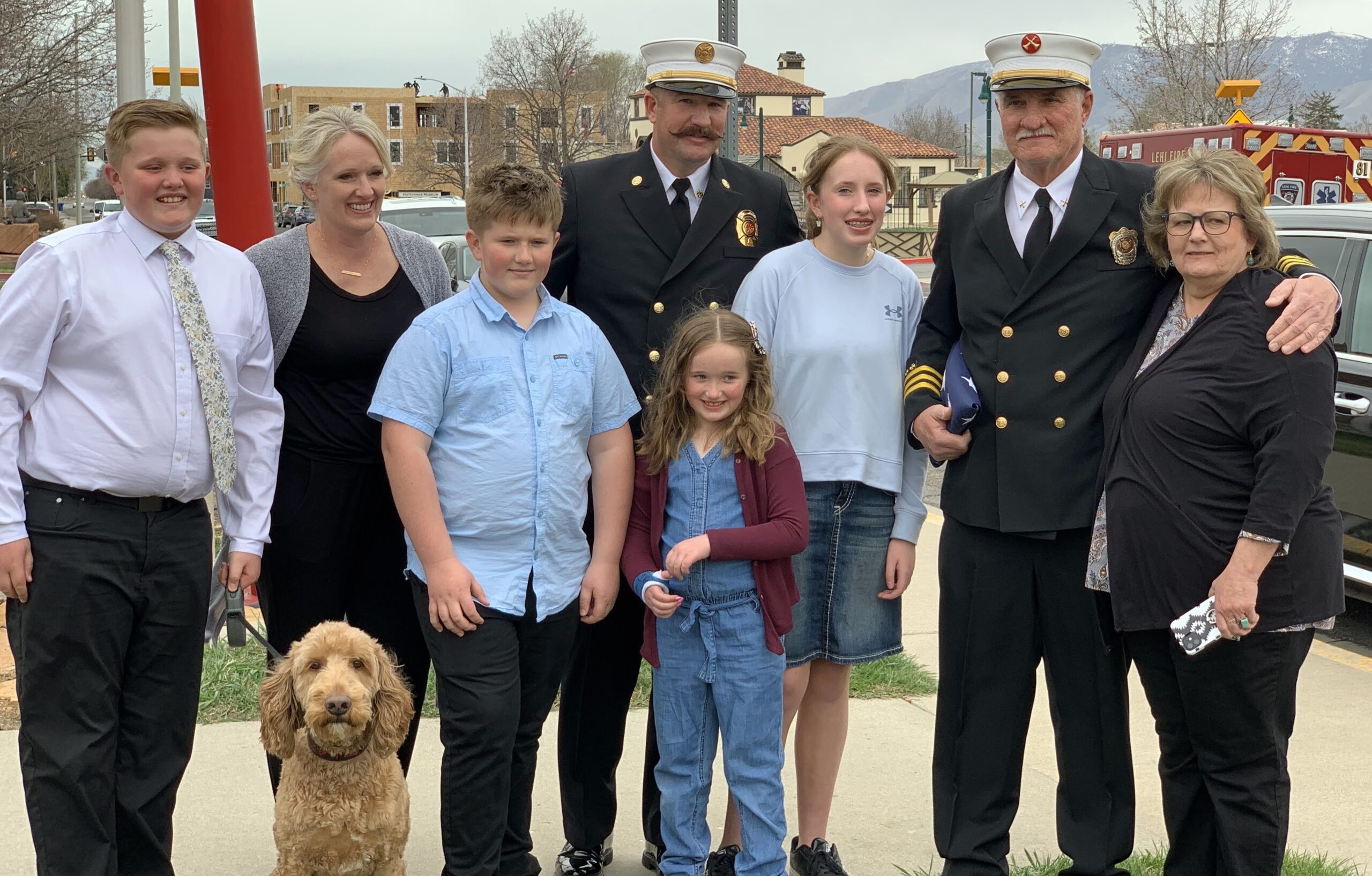 Editor’s Note: The Lehi Historical Society and Archives is proud to present the stories of its Lehi Heritage Day 2022 honorees. The story of Kim Kent and Rebecca Kirkham Beck is the first of nine articles featuring this year’s honorees. Each couple will be celebrated at Lehi Heritage Day on Sept. 5, beginning at 2:30 p.m., in a parade, a celebration with the mayor, city council and public and a meet-and-greet. The free, city-sponsored event celebrates those who have given tremendous service to Lehi andhonors Lehi’s remarkable history. This year’s theme is “100 Years of Beautiful Lehi Homes.” For more information on Lehi Heritage Day or the Classic Car and Bike Show, see lehihistory.com.

From serving decades at the Lehi Fire Department to being an outspoken proponent for preserving Lehi history, Kim and Rebecca Beck have contributed much to Lehi and its residents.

During his 32 years at the Lehi Fire Department, Kim helped shape the brotherhood that defines the department today. He ushered in a new era of the department as it transitioned from volunteer, to part-time, to a career department. Kim led by example and attended to the needs of the firefighters directly with compassion and friendship. He never wavered in delivering professional leadership. Kim retired in April.

At the same time, Rebecca always supported him in his demanding work. She did this, in one way, by serving on the Utah Fireman’s Association women’s auxiliary, where she held various leadership positions.

Rebecca served in the Parent-Teacher Associations of her child’s schools, in Cub and Boy Scouts, enjoyed various local book clubs, the Miss Lehi Committee and most recently led the Lehi Historical Preservation Committee. She volunteers for the Lehi Historical Society and Archives and has always been an outspoken proponent of preserving Lehi history, often meetingwith local politicians to express her concerns.

Though she’s quiet about it, Rebecca has always been one to provide secret service to Lehi City residents who may be struggling. The reach and scope of these acts are infinite and unknown, as she does not seek or desire recognition.

In the early 1990s, Kim and Rebecca organized a youth conference for their ward of The Church of Jesus Christ of Latter-day Saints. The theme was “Make a Difference.” Not only was this the theme for that year’s youth conference, but it is a theme that the Becks have lived their entire lives.

Kim and Rebecca were born only four days apart in July 1956 in the old Lehi Hospital. They grew up knowing each other and attending Lehi schools. In high school, Kim played football while Becky was on the drill team, serving as president her senior year. The high school sweethearts were Homecoming king and queen their senior year. They graduated in 1974 andmarried in Provo in 1975.

A fifth-generation Lehian, Becky is the daughter of Dean and Gloria Kirkham. Her parents were Lehi Heritage Day honorees in 2014, the first year the award was given. She is the third of five children.

A fifth-generation Lehian as well, Kim is the son of Kent and Carma Beck. He has one brother and one sister. For many years, Kent was the sergeant in charge of the Lehi National Guard Armory. He helped numerous men through the Vietnam era by signing them up for the National Guard.

Kim and Rebecca live near Wines Park in a restored 1927 bungalow. They have one son, Jake. Kim enjoyed volunteer coaching youth soccer, football, baseball and basketball while Jake was in school. Jake also served on the Lehi Fire Department and recently retired from there after 23 years. Jake lives in Lehi with his wife and four children.