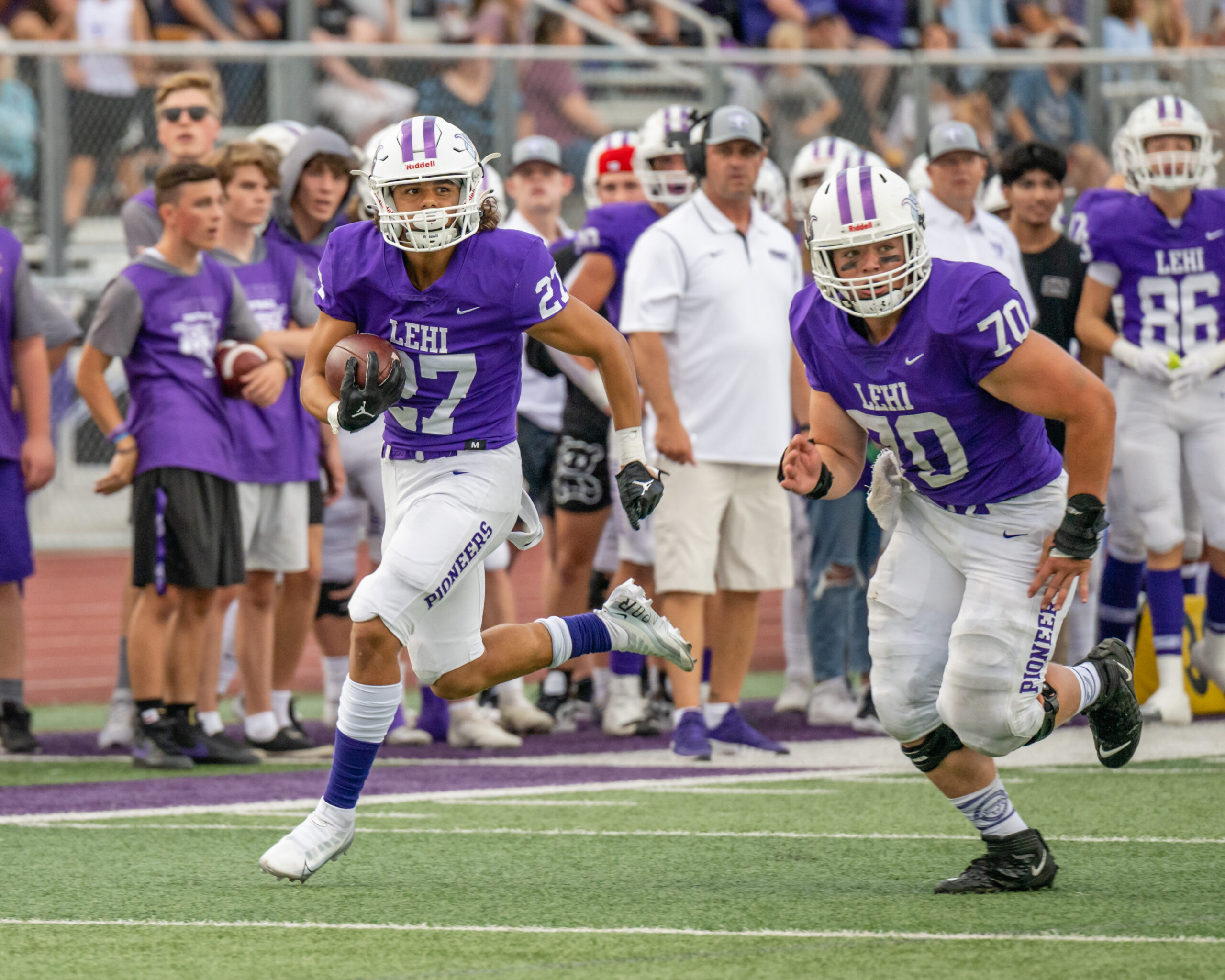 Another week, another win.

For those who love the game, it never gets old. But this 42-7 victory over Highland of Idaho on a windy Saturday evening (Aug. 27) will go down as one of special significance in the 101-year history of Lehi football.

The Pioneers just made Coach Ed Larson the winningest coach in school history.

The Pioneers traveled north to take on the Rams as part of the annual Rocky Mountain Rumble, which features eight games over two days pitting Utah teams against Idaho programs.

This year it was hosted by Madison High School in Rexburg. Defending state champion Lehi was matched against the Class 5A runner-up in Idaho last season.

However, as soon as the contest started, there were some obvious differences. Highland graduated 13 starters from last year’s squad, and Lehi returned 15. There was also a clear separation in depth as the Pioneers rotated players on nearly every down and some of the Rams played both ways.

Unfortunately for the Idaho team, the result was rather predictable. However, Highland does own the distinction of being the first team to score on the Pioneers this season, albeit on a defensive play.

The game actually started that way for both squads. On the game’s initial possession, the Rams were facing a fourth-and-long deep in their own end.

Lehi senior defensive end Camden Williamson brought the pressure and the ball ended up on the turf, where it was scooped up by senior linebacker Hema Katoa and returned for the first points of the evening. The PAT by senior kicker Nate Shepherd made it 7-0 less than three minutes into the game.

Highland went 3-and-out on the next possession and the Pioneers took over inside Ram territory.

The ball advanced on a pass interference call, but the next throw by senior quarterback Jackson Brousseau was perfectly played by a Highland defender and he ran it 80 yards down the sideline for their only score at the 6:48 mark.

After that, however, everything bounced Lehi’s way. The teams traded the ball for about a quarter before Lehi scored again, but then they got two touchdowns to end the half up 21-7.

For the first, the Pioneers began a sustained drive at the start of the second period. Using the legs of senior running back Carson Gonzalez and five of his bevy of talented receivers, Brousseau moved the ball to the 4-yard line.

Gonzalez pushed across from there, with the help of a double pancake block by senior offensive lineman Austin Boyd. The Shepherd PAT gave Lehi the lead for good with 6:13 left in the half.

During the ensuing kickoff return, the ball appeared to be knocked loose by senior linebacker Hayden Johnson and it was covered at the Highland 20. Six plays later, junior wide receiver Jace John snagged a 6-yard pass in the right corner of the end zone for the touchdown with 3:19 to play to the break.

Lehi got the ball to start the third quarter and made short work of adding to the tally. On second down, Brousseau connected with Gonzalez and he ran the ball all the way to paydirt for a 63-yard score.

The Rams were held to 3-and-out once more, and the Pioneers got the ball back with a short field again at the Highland 35. On the first play of the series, Gonzalez carried the ball over the line with the help of some nifty moves to make it 35-7 just three minutes into the half.

The starters remained in the game for conditioning until Brousseau ran 10 yards for the final touchdown with 8:48 left on the clock. The reserves moved the ball well but fumbled it twice near the goal line, so they didn’t score again, but they also gave nothing up to the titular home squad either.

The Pioneers will visit Copper Hills Friday (Sept. 2) at 7 p.m.