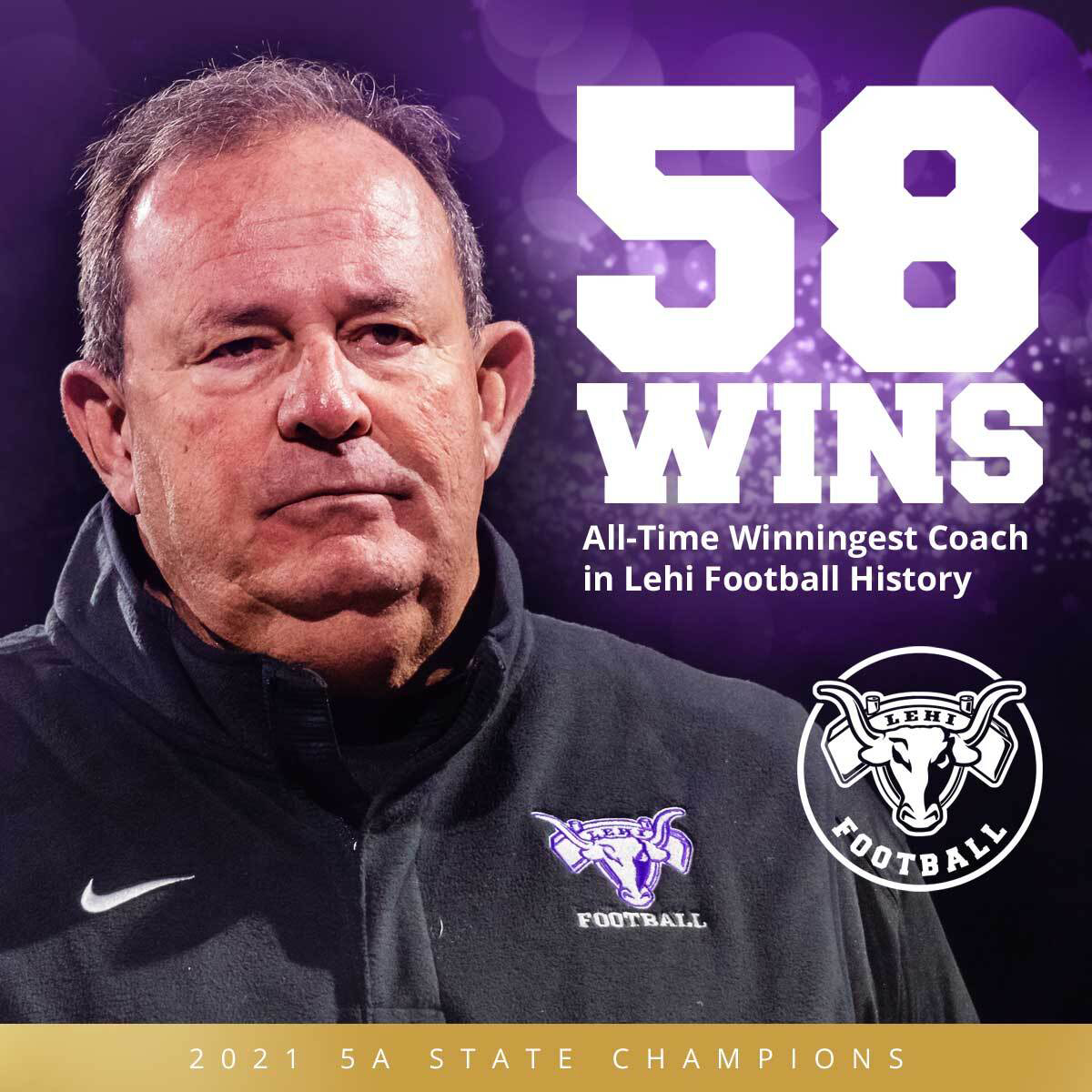 With Saturday night’s victory over Highland of Idaho in Rexburg, the Lehi High School football team secured Coach Ed Larson’s spot in the record books as he’s now in first place for the most coaching wins in Pioneer football history with 58 after breaking the tie with Coach Lou Andrus (1975-1988) at 57.

Andrus himself is a local legend and distinguished company to be in. He spent 30 years as a teacher, coach and administrator at Lehi and his 1980 team earned the school’s first football state title, when it was in Class 2A.

Things have changed a bit in the last 34 years. The Pioneers compete in Class 5A now against other big urban schools in the state’s largest division with 32 institutions. That means that for all teams, it’s the hardest road to the championship.

As the school endured the pains of rapid growth and classification bumping, the football team fell on hard times after Lehi won the Class 3A football title in 2000 under Coach Steve Clements.

From 2002-2013, the program’s record was 34-87. Player morale suffered and so did community support. It was into this set of circumstances that Larson arrived at Lehi prior to the 2014 season.

“I attended Coach Larson’s first parents meeting, when I had a son going into ninth grade,” said former booster parent Tom Brannelley. “The football culture at Lehi was so bad that my son had played for two years in the youth league and never seen the high school coach even once.”

He wanted to do whatever he could to help change that.

Brannelley remembers that Larson had a long list of support requests that he presented at this meeting. One of the things he wanted was to have a website for the program. Brannelley’sprofessional background is in site design, so he volunteered to help with that.

There was a lot of grumbling around town when Larson was hired because he came over from Timpanogos, where his teams hadn’t advanced beyond the first round of the playoffs during his tenure. However, Brannelley was impressed with his vision for the program’s future at Lehi.

“Ed knew that at a big school, he needed to be coach and CEO,” he said. “He understood that we can get help for all athletics at the school if the football team is successful. They don’t have to win a title every year; they just have to be in contention.”

Larson also wanted to see some rebranding. After lengthy discussions, the Pioneer mascot was retained but the logo was changed to the Longhorn-type one the school is using now instead of the old wagon wheel design. He also delegated tasks to those he trusted to move the program in the right direction.

For the past five seasons, the Pioneers have won nearly three-quarters of their games, so most people have forgotten that Larson’s tenure didn’t get off to an auspicious start. His first year in 2014, the team went 0-10 and scored more than two touchdowns in a contest only twice during the season.

But it got better. The next year the team won three games and had two close losses. They still didn’t qualify for the playoffs, but the next year in 2016, they went 8-4 and reached the state quarterfinals.

Brannelley said that after the game which assured Lehi would have a winning record that third season, he and Larson were walking back to the school to lock up the iPads. The coach looked at him and said, “I just guaranteed another year here.”

Then came 2017. The Pioneers won 12 games, the most ever in the history of Lehi according to renowned state football expert George Felt. They claimed an undefeated region title and went on to win every tournament game by substantial margins on the way to the state crown.

Since then, the Pioneers have made the tournament every year. They earned another 5A title last season and are highly regarded again. Brannelley said the mindset has completely changed. “For kids aspiring to play football now, they only know the team as a contender every year,” he said.

Brannelley has not been surprised at Larson’s success. “Despite splitting with Skyridge, the base was there, but If you don’t have leadership, it’s not going to happen,” he said.

“From the beginning, it was clear that Coach Larson got it. Even in the hard times, he said they didn’t represent what the program could be,” Brannelley said.

He helped groom another dad, Trevor Clifton, to take over after he left the program. Clifton is a board member of the Lehi Gridiron Club, the official program booster group.

“Coach Larson has built the Lehi football program on the pillars of trust, hard work, and personal accountability,” Clifton said. “Doing things the right way helps young boys become young men, leading to success on the football field and setting them up for success for the rest of their lives.

“I got involved six years ago with Lehi football because I liked this vision and wanted to support it,” he added. “The character and grit that Coach has always instilled in his teams will be his lasting legacy at Lehi High School.”

Former athletic director Sean Yeager considers Larson to be truly one of a kind. “Anyone who knows him will agree,” he said. “Ed is more than a coach. He’s a father figure and mentor to his players present and past. I’ve witnessed him firsthand many, many times say the most inspiring things to kids.

“It’s not just what he says, it’s his quick wit, incredible sense of humor and compassion,” Yeager continued. “It’s truly a sight to see. As an educator and former coach, I still have moments when I ask myself what Coach Larson would do or say right now.

“I consider him a true friend and couldn’t be happier for him as he deservedly becomes Lehi’s winningest football coach. I offer him my warmest congratulations on this milestone,” he concluded.

Lehi Principal Doug Webb is also a fan. “We are so grateful for all that Coach Larson has accomplished over the past years,” he said.

“He is a great mentor and truly cares about each student athlete. I have learned from him as I have watched him lead. He and his wife are dedicated to the success of Lehi and all the students. I am proud to be associated with such a great coach and great community,” Webb went on.

“I offer my thanks to all who have worked so hard and have been a part of our success,” he said. “Coach Larson is truly one of the best and someone I am glad I can call a friend. Congratulations to Coach Larson and to the Lehi football program.”