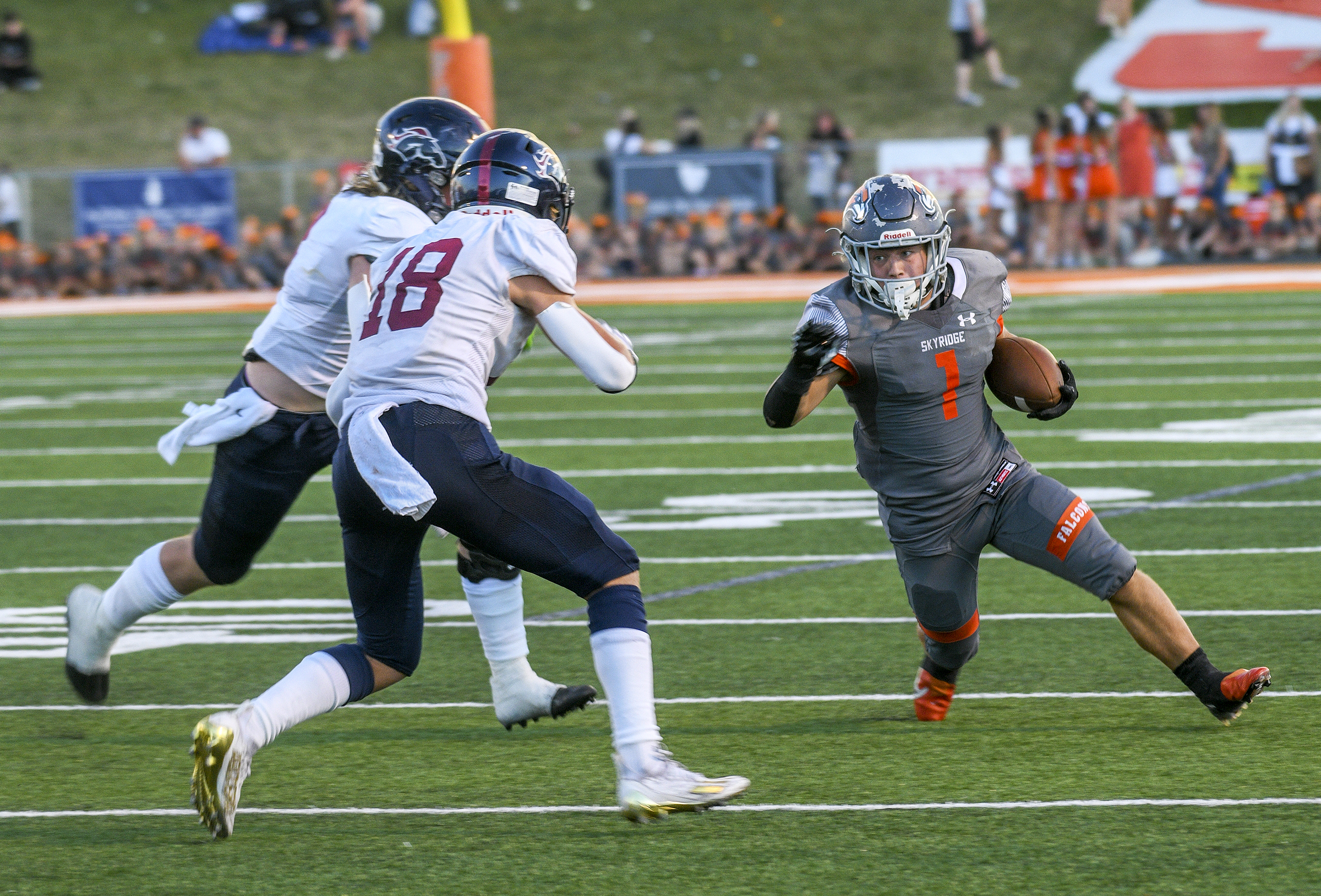 You had to feel bad for Herriman.

As their injury-depleted roster was getting roughed up in the trenches all night, the Mustangs lost their starting quarterback to an undisclosed injury. They got few first downs and were never even near the red zone. The predictable result was a 43-0 victory by the Falcons tonight (Aug. 26) for Homecoming.

Senior quarterback McCae Hillstead ran for three touchdowns, two from short distances. The other, a 20-yarder, fully displayed his athleticism and shiftiness.

He made two of those scores in the second half of the first quarter, and Ian Keeslar converted the point-after attempts to give Skyridge the 14-0 advantage with about four minutes left in the period.

Herriman only went backwards on their next possession and ultimately gave up a safety when senior linebacker Tausili Akana downed the Mustang quarterback in the end zone, one of many fine plays he had in this game.

The Falcons marched right back down the field after receiving the subsequent kick and capped the drive with a 9-yard touchdown by senior running back Tate Walker, who picked up a lot of yards against the outmanned visitors.

That made it 23-0 just a minute into the second quarter. Hillstead added his third score less than four minutes later.

It looked like Herriman was finally getting something going when the Mustangs completed a long pass play that carried them to the Skyridge 41, and then they got five more yards on a penalty. But on third and two, senior linebacker Elijah Terripaia came up with a big sack.

To add insult to injury, the drive ended when Falcon senior defensive back Smith Snowden intercepted a pass attempt and ran it back for a big return.

A few plays later, it was Herriman’s turn to snag an errant pass, so the 30-0 score stood to the break.

In the middle of the third quarter, Skyridge failed to convert on fourth down and it looked like Herriman had caught a break. But three plays later, Snowden made a perfect read on a pass and turned on the jets with the ball in his hands to add a pick-6 to the scoreboard.

In the fourth period, senior quarterback Trent Call connected with Colby Smith for a final touchdown with under six minutes to play. The kick failed, so the scoreboard read 43-0 as the running clock reached zero.