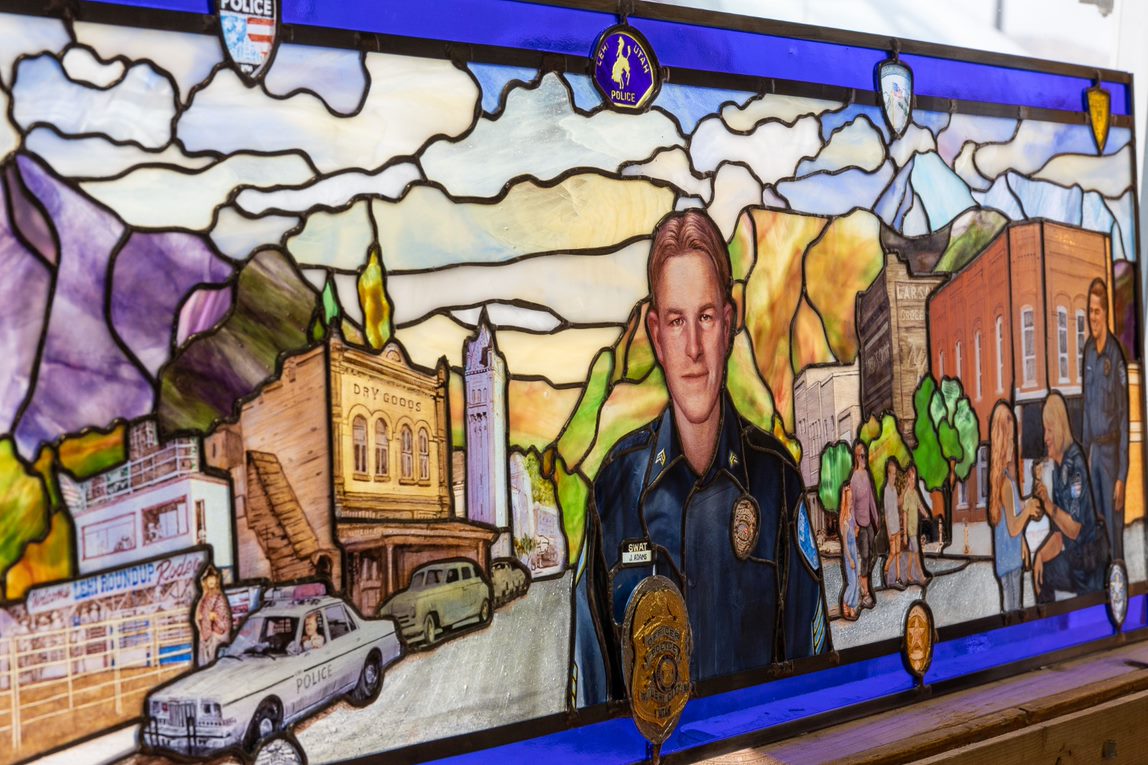 Lehi, Utah, Sept. 20, 2022—Roots of Humanity and Holdman Studios will unveil a work of stained-glass art they donated to the City of Lehi’s Joseph D. Adams Public Safety Building. The stained-glass art was placed in the Broadbent room and honors the history of Lehi, the history of the Lehi Police Department, and the memory of Joseph D. Adams, the only Lehi officer killed in the line of duty.

The unveiling and Open House will take placeThursday, September 22, at 7 p.m. at the Joseph D. Adams Public Safety Building, 128 North 100 East, in Lehi.

Central to the stained-glass window is a depiction of Joseph D. Adams, who lost his life in the line of duty on August 3, 2001. The window also depicts several former Lehi police chiefs—Berl Peterson and Carl Zimmerman—as well as Lily Southwick, the first woman to achieve the rank of sergeant in the department, and Chief Darren Paul, current Lehi City Chief of Police.

“It is fitting that the cultural arts funds we raised contributed to this work,” said Lehi Mayor Mark Johnson. “This is all part of our culture here in Utah. The window artistically tells our history. We are grateful for the opportunity to help provide funds to this piece of art that the Roots of Humanity is donating to the Lehi Police Department and the citizens of Lehi.”

The stained-glass window is a one-of-a-kind panorama of color showcasing Lehi’s law enforcement history. It also showcases artifacts,including a key from the original Lehi Jail, an 1850s-era pistol, an official Lehi Police badge, and a pair of old police handcuffs. Several of Lehi’s historical buildings are also portrayed, including the original Lehi Train station and the famous Lehi Rodeo arena,including an image of the late rodeo clown LecilleHarris. It also depicts the old Lehi LDS Church Tabernacle, Main Street buildings, the water tower at Thanksgiving Point, Lehi Roller Mills, the Old Broadbent building and store, and the new Lehi Police Station. An image of Porter Rockwell and a chronology of historic automobiles and police vehicles can also be found.

“The Roots of Humanity Foundation and HoldmanStudios are proud to be a part of the community of Lehi and to commission this beautiful work of art,” said Alan Knight. “We believe it is a great tribute to the people of Lehi, the Lehi police force, and the memory of Joseph Adams.”

Joseph Adams was shot and killed during a traffic stop of a suspected drunk driver. Officer Adams was attempting to arrest the man who failed several sobriety tests. Before he could finish placing handcuffs on the man, the man pulled a small-caliber handgun and fired over his shoulder, striking Adams. Adams pulled his firearm and shot the suspect twice before the man fled the scene. Adams succumbed to his wounds a short time later at the hospital.

“The stained-glass art is beautiful,” said Thad Adams, Officer Adams’s father.  “It is significant our son is represented centermost in his unique circumstance [referring to the stained-glass window] – [Joseph] was and hopefully will be the only officer in this community to lose their life in the service of the city. It’s not only beautiful art but also tender.”

The Adams family has two other sons currently in police work. They believe the loss of Joseph helps increase the bond police officers have in this community and communities throughout the country.

“The acknowledgment of male and female officerswho have died in the line of duty is proof of what bonds police officers together in their sometimes-thankless work,” said Adams. “I think it probably means a lot to an officer to think that if they someday make the ultimate sacrifice for the city they serve, they won’t be forgotten; they will be valued for their efforts and will be remembered. It’s part of the mentality of the residents of Lehi to remember the people that have contributed to their community.”

Lehi Chief Darren Paul agrees with Adams. Paul and Joseph Adams shared the same neighborhood and were friends as kids.

“I hope this goes beyond just Lehi and is a message to people everywhere that says, ‘Hey, police are a part of the community, and the community and police work together to make it a safe place.’ I think the police need to strike a delicate balance of community policing and community concern. Our officers know that well and do a great job.”

The eight-foot-long stained-glass work of art is on permanent display in the Broadbent room of the Joseph D. Adams Public Safety Building and is open to the public.

An available mobile app will creatively animate and tell the story of the scenes in the window.