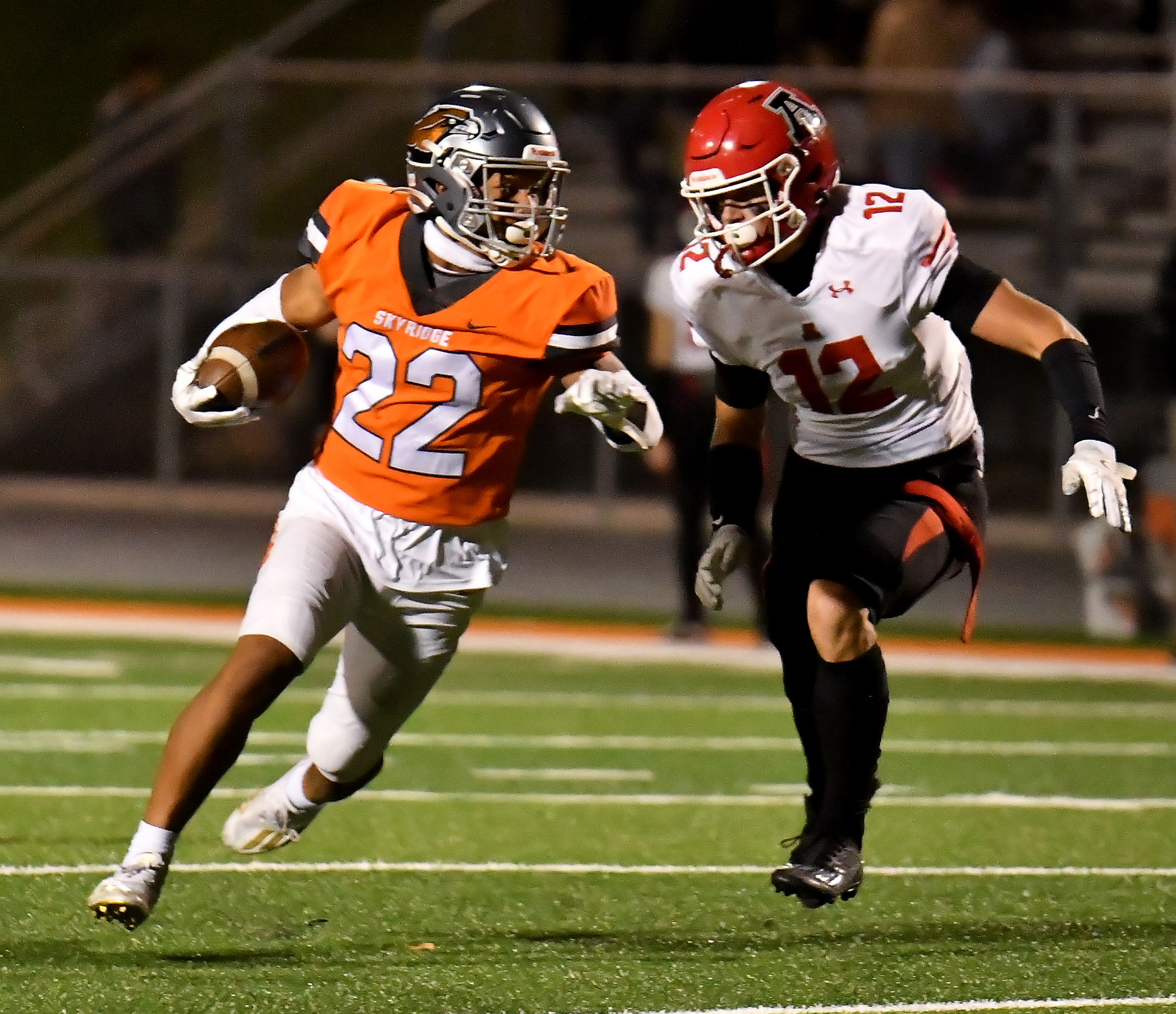 The Skyridge football team ended the regular season Wednesday (Oct. 13) the same way the Falcons had started it – with an overwhelming victory. With only the four-point loss to Corner Canyon as a spot on their record, the Falcons now await the bracket reveal on Saturday to see how the playoffs begin.

Wednesday night, Skyridge and American Fork met in Lehi for a rivalry game to determine state playoff seeding. The Falcons were dominant from the first whistle on both sides of the ball, beating the Cavemen 37-0.

The Skyridge offensive unit conquered the line of scrimmage, thus allowing senior running back Tate Walker to rush for 100 yards. The line also protected junior quarterback Trent Call, giving him opportunities to complete passes over the middle and deep down the field.

Call played with maturity and confidence and made great decisions all night long. He threw two touchdown passes and ran for another to lead his team to a victory. The offensive line kept American Fork’s big and fast defensive end ineffective throughout the entire game.

Skyridge Head Coach Jon Lehman said, “It was a good start to the game. Offensively when we put that ball into the end zone in the first quarter, it allowed Trent Call to settle in and do his job.

“Trent had a very clean game and was able to get the ball out to where it needed to go. The offensive line did their job well tonight,” the coach said.

The Skyridge defense overpowered the Cavemen and completely shut down their offense. The Falcon defense kept the athletic American Fork quarterback scrambling and constantly on the run.

Senior linebacker Mason Anderson was the highlight player with several tackles and keeping the Caveman quarterback in check all night.

Senior cornerback Brady Beers intercepted the ball on a long pass which kept the momentum running. Senior linebacker Tausili Akana nabbed a fumble recovery forced by senior safety Dalton Young. It was a team effort on defense as numerous players prevented the Cavemen from scoring.

“Defensively, the guys were really good tonight with communication and getting lined up. They executed well and had a clean game,” Lehman said.

“The front four along with the outside linebackers and inside linebackers were really physical and aggressive,” the coach went on. “Mason Anderson had a great game. He is incredibly smart and very humble. He doesn’t seek credit and it is how he carries himself. I’m so proud of how he plays.”

This was a perfect ending to the regular season for Skyridge. The win meant a lot to the Falcons on senior night. Skyridge’sdynamic team effort week after week has led to a successful season in the state’s toughest 6A region.

Anderson said, “It was a short week and we had to work hard to be ready. We were physical all night and played a good game for senior night. This season I’ve tried to do my best in this position and be a leader for the team.”