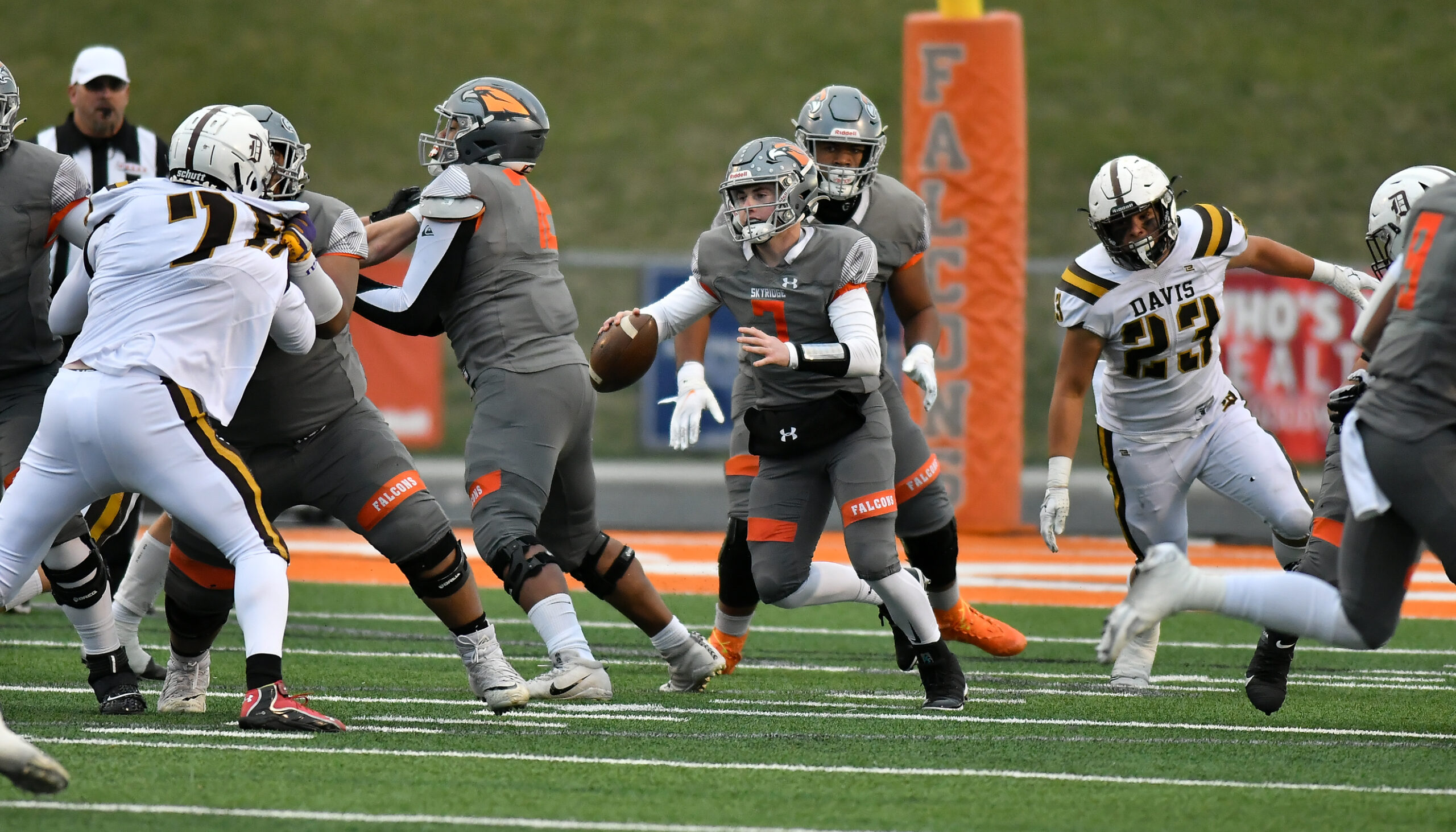 The Skyridge football team earned a comfortable 47-22 win over Davis in the quarterfinal round of the 6A playoffs Friday (Nov. 4) evening at home. The win gives the Falcons their fourth appearance in six seasons in the semifinals at Rice-Eccles Stadium.

The Skyridge no-nonsense offense scored 20 unanswered points in the first quarter to set the tone for what ended up being a solid win for the 6A’s second seed.

In his first game back from injury, senior quarterback McCae Hillstead threw four touchdown passes, one of which went to senior running back Tate Walker, who also rushed for two morescores.

Junior wide receiver La’alea Kalama scored three of his own touchdowns on a variety of catch and run plays. Kalama continues to show great versatility in the Falcon offense. Junior running back Carter Sheffield scored the final points for the Falcons with a three-yard plunge into the endzone.

“It was a good game tonight, said Skyridge head coach Jon Lehman. “Davis is a good team. They do a lot of great things on offense and on defense and are well coached. I thought we played a good game in all phases.”

He added, “It was nice to have McCae back. He played a really clean first half and got a good rhythm going and did a great job getting the ball out there where it is supposed to go.”

Hillstead said, “It felt really good to play tonight. The surgery I had was really comprehensive, but I did all the recovery that was needed and now I’m back and feeling really great.

“The team executed well tonight. We started off really hot in the first half and came out striking in the second half. Everyone did their job and overall, we had a good game,” added Hillstead.

Senior offensive lineman Adam Stephens said, “Our tenacity on the O-line and trying to get as big of movement as possible and take control made the difference tonight.

“It was also great having McCae back, he balled out tonight and boosted the offense,” the player continued. “I love the guys I work with on the O-line and we are going to keep rolling forward.”

The Skyridge defense continues to dominate the line of scrimmage. The defense pressured the Davis quarterback throughout the game. Senior linebacker Tausili Akana registered two sacks with junior linebacker Amani Liufau and senior linebacker Sione Westover also garnered sacks of their own.

Senior linebacker Mason Anderson kept the defense steady by keeping them aligned and communicating the defensive calls throughout the game.

Lehman said, “Mason Anderson had a really good defensive game. All of our front guys did some different things defensively and executed well.

“Tausili Akana, Deshawn Toilolo, and Ian Mariner were all really disruptive even though they were getting double-teamed most of the game. It was just a clean defensive game,” the coach said.

This was the last game at home after six years for Coach Lehman as he will step into the role of athletic director full-time next season. The quarterfinal victory was a good celebration for many of the seniors who played their final game on the Falcon field but look forward to playing in the semifinals.

Hillstead said, “This was the last game for me on this field and I just kind of took it in and played my best tonight.”

“It felt really great to win our last game on our field this season, but we are not finished yet. I’m super excited to have these guys around me. Our coaching staff is amazing, Coach Hemm put great plays in for us to execute tonight,” said Stephens.