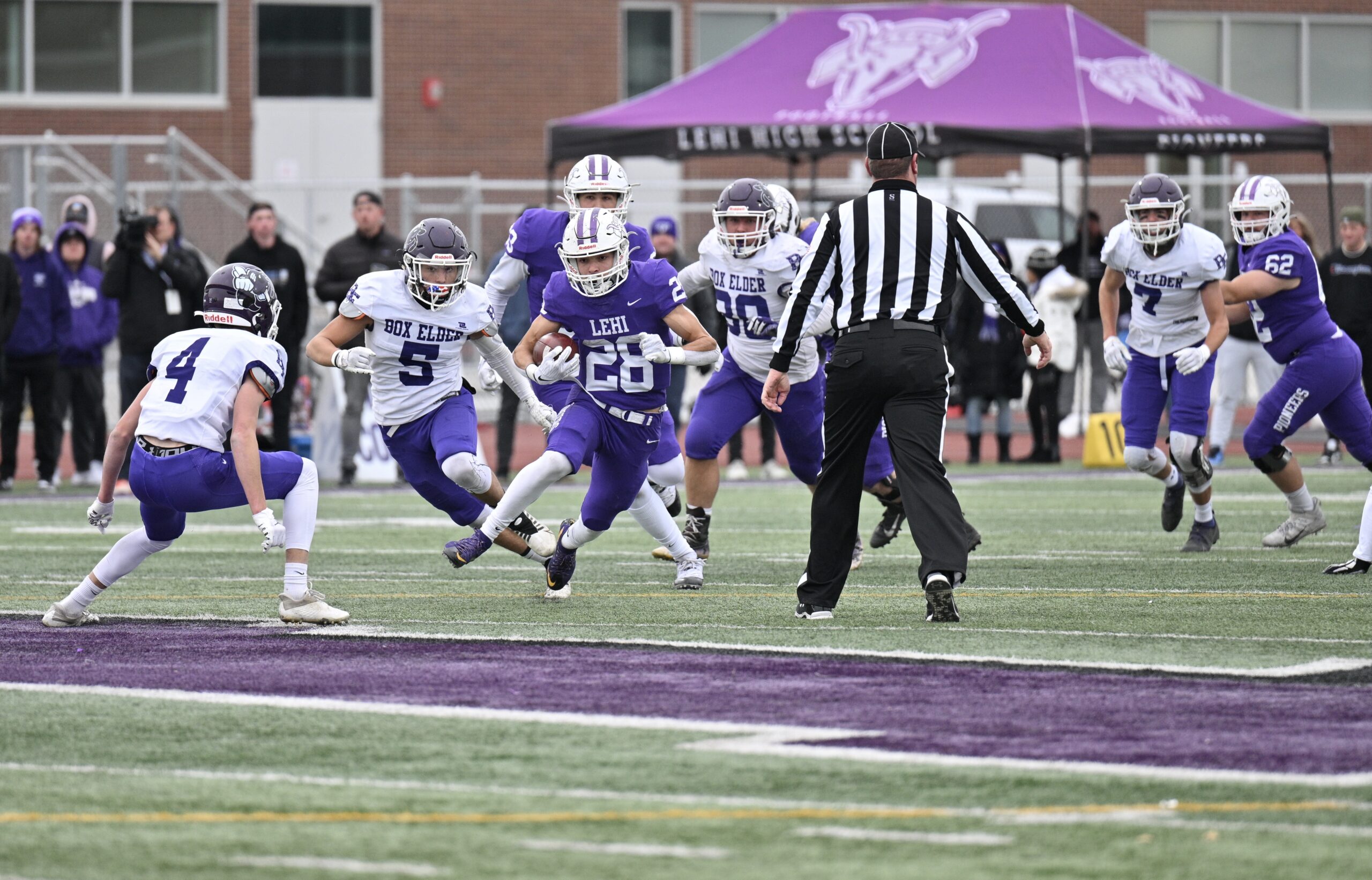 The top-ranked Lehi football team was ahead less than five minutes of tonight’s quarterfinal matchup against #9 Box Elder, but that total included the last 30 seconds of the game when it mattered the most as the Pioneers pulled out a come-from-behind victory 28-21 over the gritty Bees.

Lehi senior quarterback Jackson Brousseau, who had given up just five interceptions all season, threw three in the first half of this contest and one of them led to the visitors gaining the first advantage at the 5:19 mark of the first quarter.

Box Elder surprised the Pioneers with a successful two-point try so they went ahead 8-0. The Bees were able to execute their game plan at a high level throughout the contest.

Lehi responded with a 5-yard touchdown toss from Brousseau to senior tight end Jace McGary in the second quarter at 9:07, adding senior Nate Shepherd’s PAT to still trail by one point. That’s how the scoreboard read at the break.

Box Elder got the ball to start the second half and penetrated to the Lehi 30 but were stopped there by some good defense. The Bees tried a 47-yard field goal, but it went wide.

The Pioneers were then able to sustain a long drive which ended with an 8-yard rushing score by senior running back Carson Gonzalez for a 14-8 lead at the 4:32 mark of the third period.

Box Elder came right back and retook the advantage 15-14 with five seconds left to the start of the final quarter.

Lehi’s next drive stalled, and the Pioneers had to punt the ball away. The Bees broke a huge run which helped them to score again with 6:16 left to play. They elected to go for another 2-point conversion, but this time senior defensive back Hank Griffin was right there to snuff out the attempt.

With their backs against the wall, the Pioneers finally put together a drive with a few plays that were more characteristic of their season, and they tied the score at 21-all with a 15-yard Gonzalez run and 2:29 remaining.

In Box Elder’s next series, defensive tackle Jacob Price dropped the ball carrier for a loss on 3rd-and-3 and the Bees punted the ball back to their hosts.

Senior kick returner Kadiyon Sweat broke a big run to set his team up at the Box Elder 44-yard line with 1:19 left on the clock.

From there Lehi completed three quick passes to get within striking distance, and Gonzalez finished off the drive with two carries, the second of which was the go-ahead touchdown with 29.7 seconds left.

The Bees had one more chance and tried a trick play for a bigger gain, but the Pioneer defense knocked the ball loose and it was covered by senior defensive back Lance Olsen at the Lehi 21-yard line. Brousseau took a knee to allow the clock to run out.