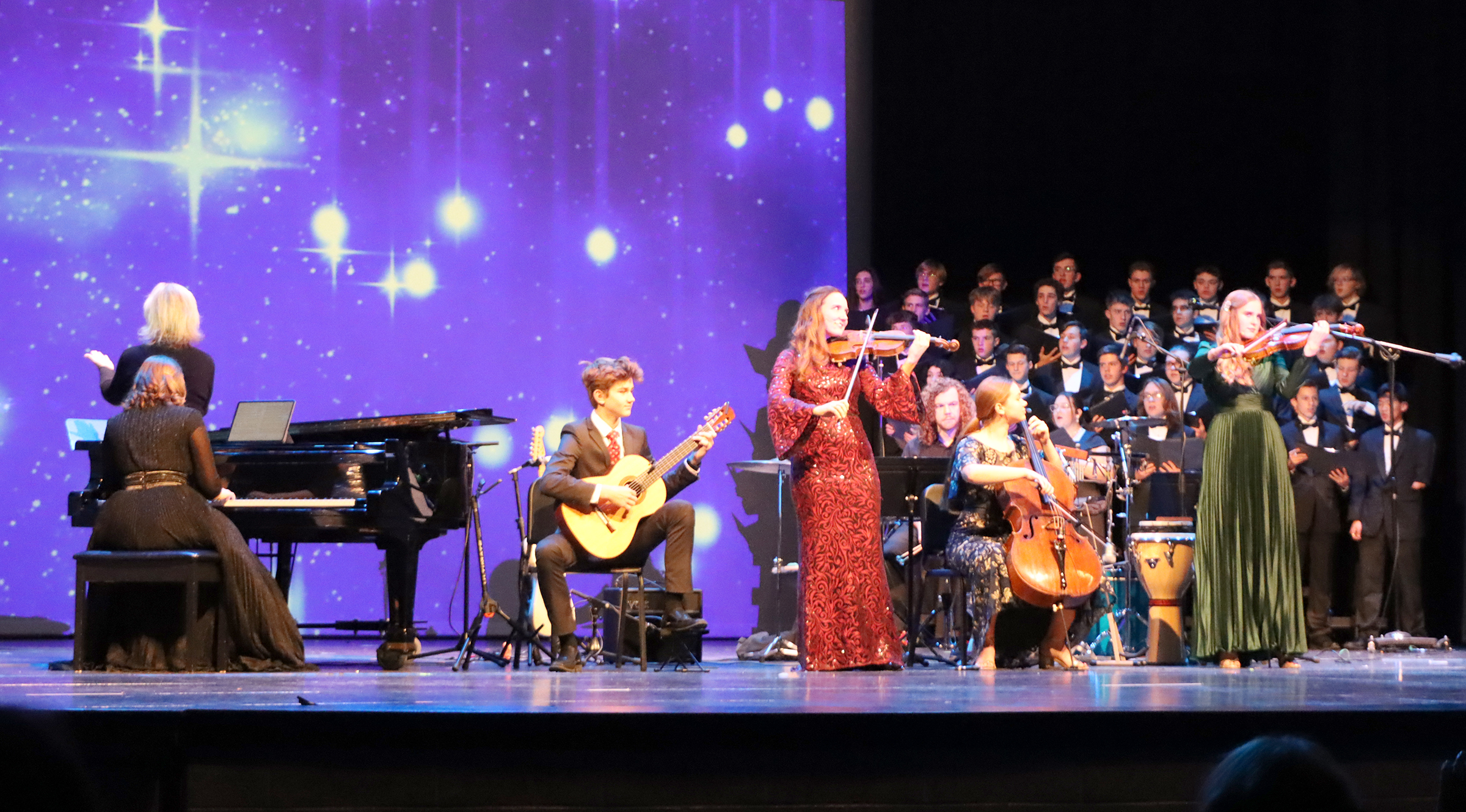 The Skyridge High School Concert Choir had the opportunity to back up acclaimed violinist Jenny Oaks Baker as her “Joy to the World” Christmas tour made a stop at the school on Dec. 16.

This was a multi-faceted, two-hour professional concert including not only Baker and her four children, performing with her as “Family Four,” but a narrator, a soprano soloist, a percussionist, a bagpiper, dancers and accompanying videos projected on a full-sized backdrop on the stage as well.

The Concert Choir performed at Temple Square earlier in the week. Choir teacher Kirsten Richards is always trying to provide these opportunities for her students.

“We are doing some exciting things with the choirs here,” she said. “These events help my students to improve not only their musicianship but also their discipline as performers. We’re very grateful to Mrs. Baker for allowing us to be a part of her tour.”

However, since Baker is touring, the only chance the students had to rehearse with her was on the day of the show. It was a minimal day as the end of the term, so as soon as school was out, the students went to the auditorium and remained there until the performance was over.

This experience helped them understand a little bit better the grueling aspect of being a touring professional.

The event included 18 musical numbers presented as part of a sequential narrative of the Christmas story as told by “David,” a shepherd from Bethlehem played by bestselling author Jason F. Wright, who introduced the numbers and their accompanying videos.

The selections included classic favorites as well as some new songs and “Silent Night” sung in Gaelic. The audience was invited to sing along for a couple of the numbers and the choir backed up several of them as well. The audience was also treated to some artful arrangements of even the familiar standards.

The “Family Four” includes Laura Dickson, 21, a student at BYU who plays violin and percussion; Hannah, 19, studying piano at The Royal Academy of Music in London; Sarah, 18, who plays the cello; and Matthew, 16, who plays the classical and electric guitar.

Soloist Alex Sharpe was flown over from Ireland for this performance. She is a former member of the Celtic Woman group and has performed in many places in North America and around the world, including with Baker and her children last December at the Rome Temple Visitors Centre in Italy.

Jay Nygaard provided the percussion backing and Kariann Hibbard was the bagpiper. Baker’s production staff worked with the school’s crew to provide the necessary technical support.

The dancers included members of the Children’s Dance Theatre and Contemporary Companies of the University of Utah Tanner Dance Program as well as the Shelly Irish Dance Company, which proved to be a crowd favorite with their crisply executed choreography.

Baker’s virtuosity was on full display and continued to build throughout the concert. Sharpe’s ethereal vocals added richness and texture to the numbers which included her. The deeply moving presentation left the audience in tears and garnered a well-deserved standing ovation.

Tickets to the event sold out in a matter of hours when they were offered in September and were well worth the price, which was reduced to a more reasonable level by some corporate sponsorships. Baker has released 18 studio albums which have sold nearly a million copies.