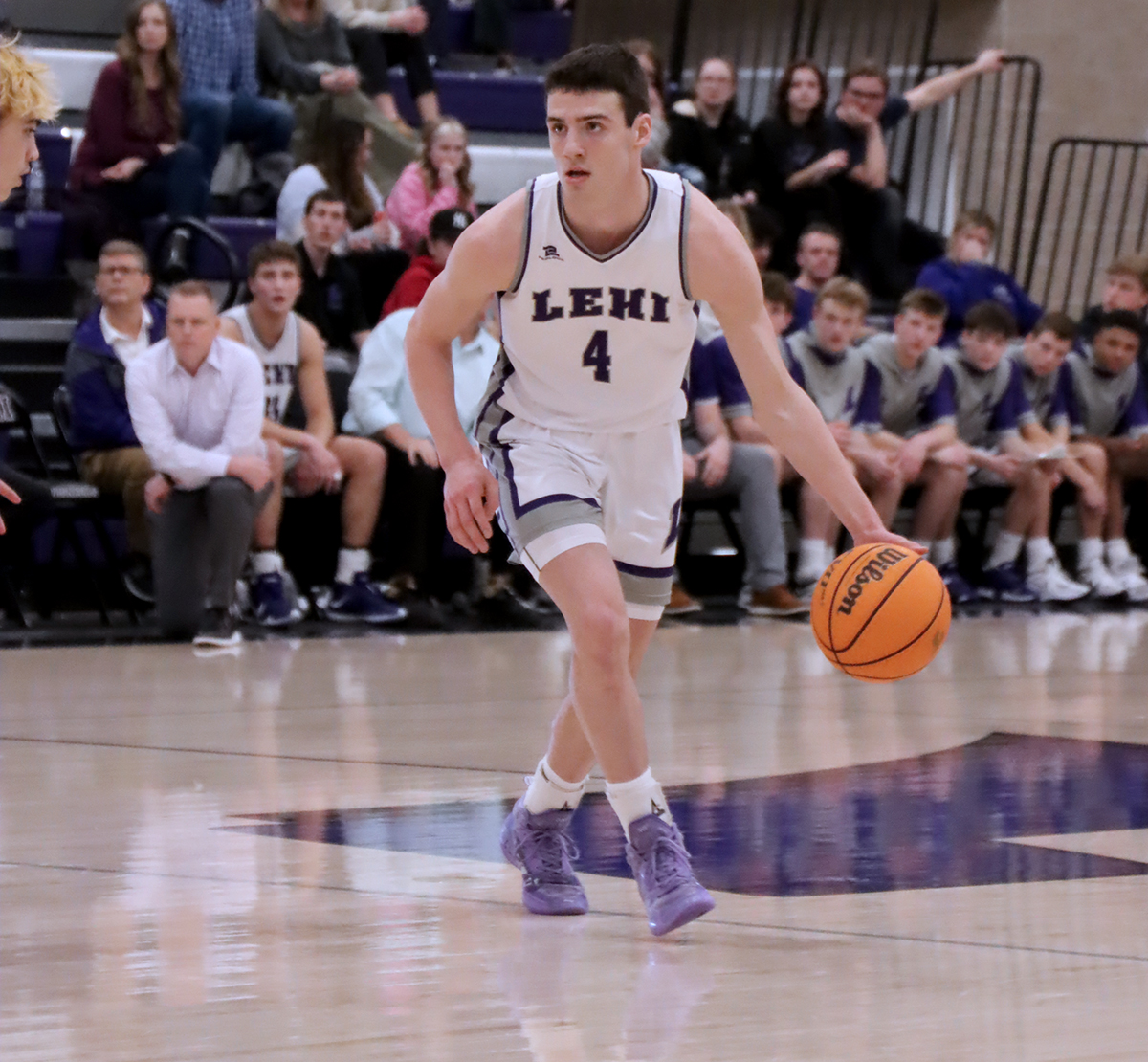 The Lehi boys basketball team racked up two more Region 8victories this week, beating Mountain View at home and then topping Timpview in a tough contest on the road.

The Pioneers are now 5-1 in league play and have a 12-5 overall record. After once being at No. 16 in the UHSAA RPI rankings, Lehi has risen to No. 6 going into the second round of league play.

At home on Junior Pioneer night, Lehi got the advantage earlybut the Bruins came back and the contest was tied at 14 entering the second quarter. It stayed close for the next three minutes, but the Pioneers finished the period on a 16-2 burst to take control for good.

Junior guard Cooper Lewis got the run started with a layup after a pass from senior forward Preston Varner. The next score came from a circus shot by sophomore forward Easton Hawkins with a made charity toss following.

Junior forward Grayson Brousseau’s defensive rebound ended in a long bomb by Lewis. On the next trip up the court, Brousseau got a steal and fed it to senior wing Tanner Cook, who drove into the paint and then passed out to senior guard Braxton Hawkins on the perimeter for another trey.

Easton sank three more free throws and Braxton took a defensive board coast-to-coast for a layup before Mountain View got one shot to fall to beat the buzzer, their first bucket in nearly five minutes because of the suffocating Lehi defense.

The Pioneers took a 35-21 lead to the locker room and the Bruins never got closer than eight points the rest of the way.

Lewis put on a show with 29 points, including three triples, along with nine rebounds, five assists, two steals and a block.Braxton tallied 14 points including 4-of-5 from long range with five boards, a couple of assists and a steal. Easton added eight points.

“They’re a good offensive team,” said Coach Quincy Lewis. “We’ll need to defend them better at their place. It was great to see Braxton break out and we got some more good production from Easton.”

The Thunderbirds made the first two baskets of the game. With defensive attention focused on Cooper and Brousseau, who combined for 32 points in the first-round meeting, Varner hit a pair of treys and a mid-key jumper for Lehi’s first eight points.

Easton got two shots in after that to make it 12-14 for Timpview at the end of the first quarter. Cooper netted 11 points in the second period and Cook hit from long range to help the Pioneers move in front 33-25 by the break. They never trailed again.

Lewis was double- and triple-teamed the entire second half and didn’t make a field goal, but other players stepped up to shoulder the scoring load. Easton, junior guard Bryson Bromley and Braxton all sank long shots to help keep the visitors in front.

Timpview closed the gap to just three points with 4:37 left on the clock, but Lehi held the Thunderbirds scoreless the rest of the way. Varner got a jumper to fall and Braxton and Cooper made clutch free throws after intentional fouls in the final 12 seconds to claim the victory.

“We battled to win that one,” said Coach Lewis. “That may be our best team victory of the season.” The evidence includes 20 assists on 22 field goals, just seven turnovers and a 25-22 rebounding edge plus five blocks against a taller team in front of a raucous home crowd.

“We won that game with good contributions from a lot of guys,” the coach went on. “If I told you our two top scorers together had 16 points you’d figure we lost, but everyone who played hit baskets and they all helped each other on the defensive end.

“Preston played excellent defense. Easton gave us 10 off the bench and Bryson hit a huge three at a critical moment. They limited Grayson’s scoring but he crashed the boards to good effect,” Lewis said. “Even when they got close, we were in control the whole way.”