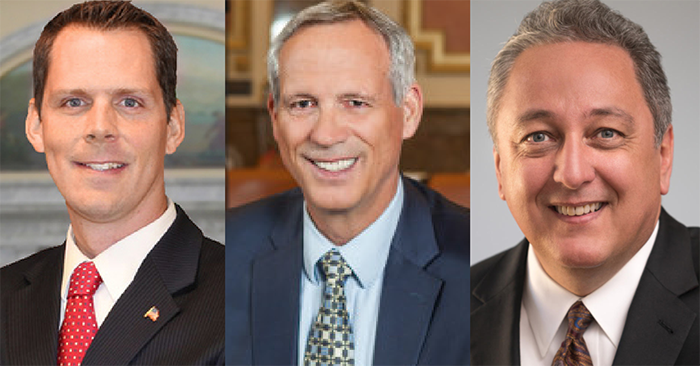 Lehi’s state representatives are gearing up for Utah’s legislative session, which begins this coming Monday, January 23. From issues dealing with I-15, to paramedics and EMTs, to state collection of personal data, Lehi’s legislators will be active at the Capitol this year.

Lehi’s city boundaries include one state Senate district and two state House districts. All Lehi residents are represented by State Senator Jake Anderegg (Senate District 13), who also represents areas to the west and down to Fairfield. The city incorporates two House districts, with Kay Christofferson (District 56) representing those in the east part of the city, and Cory Maloy (District 6) representing those in the west and Traverse Mountain.

All three legislators agreed that a major priority for the session will be a proposed bond to move up the start date for construction on the expansion of I-15 from Thanksgiving Point to Lehi Main Street. Plans are already in place with an expected start date of 2020, but this proposal would allow construction to begin next year.

“It’s already having an economic impact in Lehi,” said Rep. Maloy. He noted that businesses are discouraged from locating here because of congestion now present in the area. Senator Anderegg explained that the bond will be run as an appropriation.

Another area of agreement for Lehi’s team was the importance of gaining control of Utah’s public lands. 70% of Utah’s land is owned by the federal government. The decision by outgoing U.S. President Obama to designate 1.35 million acres for the Bears Ears National Monument last month has galvanized a sense of needing to act to protect our land from outside control.

“The federal lands issue is so important,” said Rep. Christofferson. He pointed out that Utah could fund its education system with the use of just a portion of that land, which would eliminate the need for proposals to raise taxes, such as the one that will be considered this session to raise the state income tax from 5% to 5 7/8%, an increase of 17 ½%. The proposal is being promoted by two prominent groups of businessmen, Prosperity 2020 and Education First.

Many opponents point out that the proposal doesn’t include corporate income tax, and leaves the burden to individuals. Lehi’s legislators don’t support the proposal, preferring to find ways to increase education funding that don’t involve such a tax increase.

Other issues the legislators expect to be addressed include medical marijuana, the repeal of the death penalty, a proposed Article V Convention, and end of life care, known as assisted suicide or “death with dignity.”

Sen. Anderegg plans to run a bill to revamp the State Longitudinal Data System (SLDS). It will formalize the governance of the system through the Utah Data Alliance, which is a partnership of five state agencies that collect personal data: the Utah Office of Education (now called the State Board of Education), the Utah Office of Higher Education, the Utah College of Applied Technology, Workforce Services, and Health and Human Services.

“Good information drives good policy,” said Anderegg. “This will provide information to people and institutions.” He explained that data collected by the 23 state agencies involved will be de-identified and aggregated before leaving its original location. The bill aims to put precautions in place to prevent hacking incidents.

Sen. Anderegg will also introduce a bill dealing with home business licensure, and one to adjust provisions related to student truancy which he feels are currently too harsh.

Rep. Christofferson will introduce a bill to create an Autonomous Transportation Advisory Committee to assess what the state needs to do to be ready for the introduction of driverless vehicles. “We need to put the right policies and preparations in place for those vehicles,” he said. He will also present bills to address some state tax provisions, clarify teacher supplemental pay for STEM teachers, and make changes to the child placement law.

Rep. Maloy will introduce a bill to include constables and their deputies in the list of law enforcement occupations which are covered by special legal protections as “peace officers.” “Just like other peace officers, they put their lives on the line,” he said. Another bill of his will aim to permit law enforcement agencies to sell their surplus firearms, rather than being required to destroy them. He also has a bill which will allow paramedics and EMT’s to audio record when they respond to a call, and use those recordings to improve training.