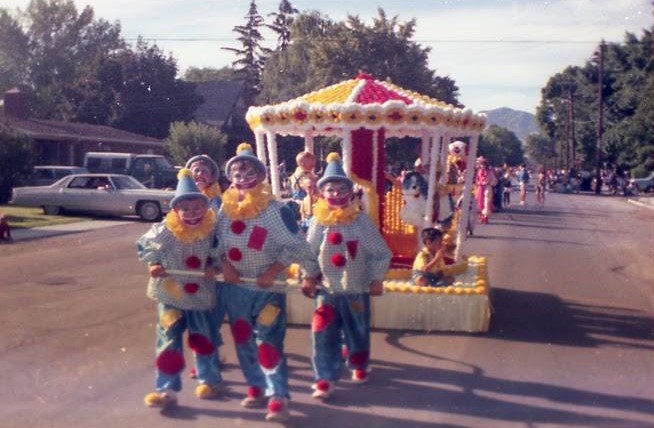 Reprinted from an issue of the Lehi Free Press, June 22, 1983, just before Roundup week and just weeks after Salt Lake City experienced a major flood.

Never in the history of Lehi has there been such anticipation for the Roundup. The stores are full of western togs and the people are marching out the door with armloads of western gear.

The Lehi Roundup is nationally known and people come from miles around to get in on the excitement. The flooding was great preliminary action because it brought the people together in a spirit of comraderie that has continued right into rodeo week.

It takes lots of togetherness and cooperation to build miniature floats. Half the ladies in town are making pom-poms and curling paper, making costumes and organizing last minute details. That takes dedication especially if your youngster isn’t one of the little darlings riding on the float! It’s gathering time for many families who plan reunions this time of the year. Lehi High Class Reunions are being held right and left in Wines Park, and at every available place in the Valley.

Brahma bulls are pasturing the Roundup Arena as cowboys shine up their chaps and saddles. Morris Clark is strutting around town with a grin on his face and Chamber of Commerce officials are holding extra meetings to arrange pet shows and greased pig chases. City fathers have worked overtime to get the city ready for the celebration. The street sweeper has been fixed, the roads have been cleared, and banners are flying across Main Street. Children are gazing at shiny new boots and staring at themselves as they look into mirrors reflecting miniature Chris LeDoux and John Waynes. Little girls are imitating Cindy O. and Dolly P. Hoping that someday they too can hit the big time.

Wards are recruiting members to sell hamburgers, hot dogs, ice-cream and sody pop at the rodeo and other ward members are stapling, pounding, putting on the last-minute touches to ward floats. Rodeo fans are swapping tales of past rodeos and records of old cowpokes. The Civic Improvement Association is holding their collective breaths, hoping for great weather and a great gate. Housewives are stocking their food shelves with grub that can be fixed in a hurry with a minimum of mess and a maximum of fast cleanup. Clubs and organizations are dreaming up fund-raising projects and ways to make money for various worthy causes. Yup, it’s Roundup time in Lehi. Everybody gets in on the action. If you’re not busy, it’s your fault. It’s a joyous, happy, memorable time in town. KayLynn Kirkham just bought three pairs of new cowboy boots for her sons and the delighted and thrilled expressions on the boys’ faces as they pranced around in their new boots says it all! Rodeo time is fun!