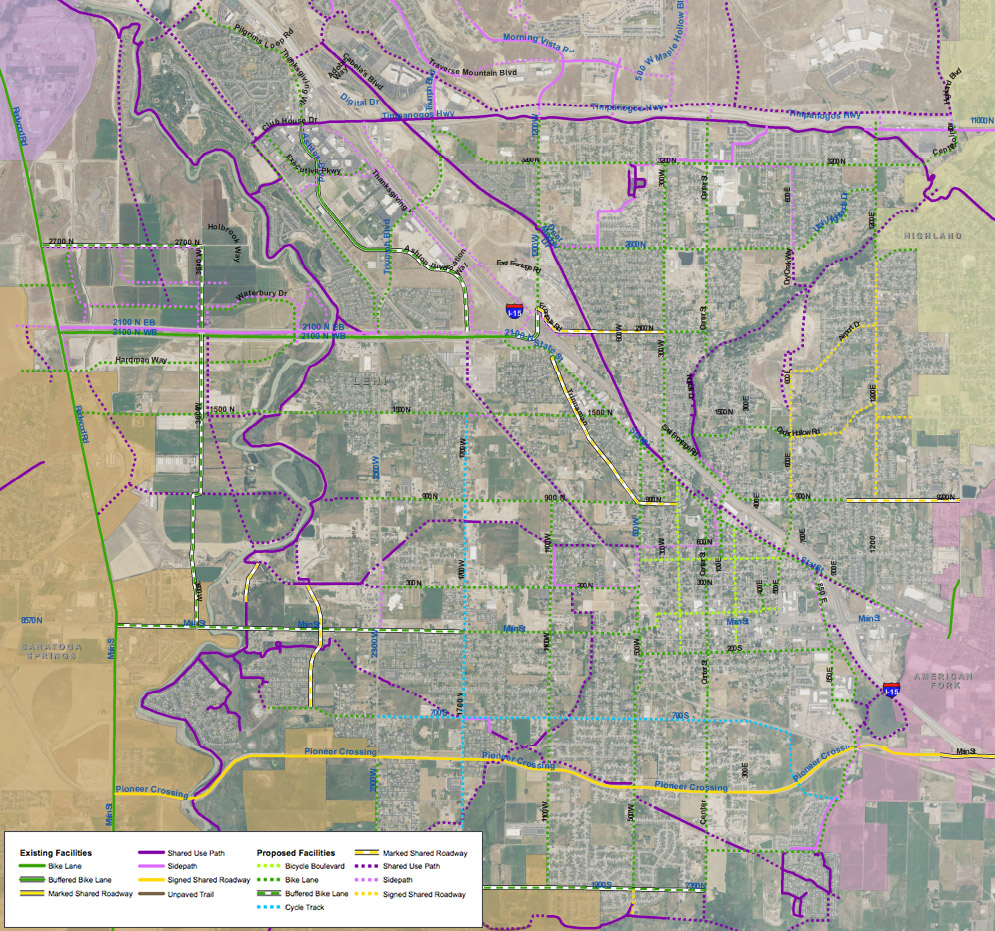 Ross Dinsdale, Lehi City engineer, updated the City Council on the Cities bike and trail system in Lehi City Council pre-council meeting on Tuesday, June 13. Dinsdale explained that mountain biking trails would be added to the original city plan. “This will be a great amenity for the city,” stated Dinsdale. “We can create a tie-in with Draper’s mountain biking system. This can all be paid for with grants, a portion of impact fees, and local biking clubs. Skyridge High School Bike Club has already raised more than $15,000 for the mountain biking trails.”

Kim Struthers, Lehi’s head planner, explained, “UDOT is planning to put in bike trails along frontage roads off 1-15. A crossing north of SR 92 will be added to connect with the Murdock Canal Trail.” He also added that there will be a trail connecting 2600 N. to 800 W. through to Ivory Ridge. There is an additional trail through Spring Creek Ranch and the Mill Pond area that will eventually connect to Ivory Ridge and then to the Murdock Canal. Riders will be able to get from the south of Lehi to Traverse Mountain on bikes.

Mayor Wilson commented, “These trails are necessities for citizens.”

Struthers continued, “We have a “Tiger Grant” from the federal government that will be matched by MAG (Mountainland Association of Governments) money and Lehi will have no “out of pocket” expense. UDOT will add to the trail system as part of their reconstruction of 1-15 projects.”

Brad Kennison, Assistant City Engineer, explained several other projects being planned by the City. There is a “southeast reliever route” that will be started in March. “We will reconstruct Main Street with widening of the road from Texaco through State Street to 1200 E.

The City is also boring a water line under the Jordan River. The City is building a new water tank that will hold 2.3 million gallons of water. This water will service the Hardman developments. Projected cost will be about 2 million dollars. The tank will sit next to the Saratoga Springs tanks and we can use cost sharing for emergency use only.

A storm drain project is being constructed on the north side of SR 92. UDOT presently has a “monster drain” to service the area. The work will start at Cabela’s Drive past the detention basin and fire station.

A discussion concerning the use of the Community Development Block Grant was held. The City will use the money to upgrade old water systems in the old part of Lehi.

In regular City Council meeting the council members were treated to cupcakes and an invitation to Round-up Days by Kadee Jo Jones, Miss Lehi, and her attendants, and Lehi’s rodeo queen Kassidee Jo Jones. The brochure of all the week’s events was also given.

There was no public input.

The remainder of the agenda items were unanimously approved. They included: