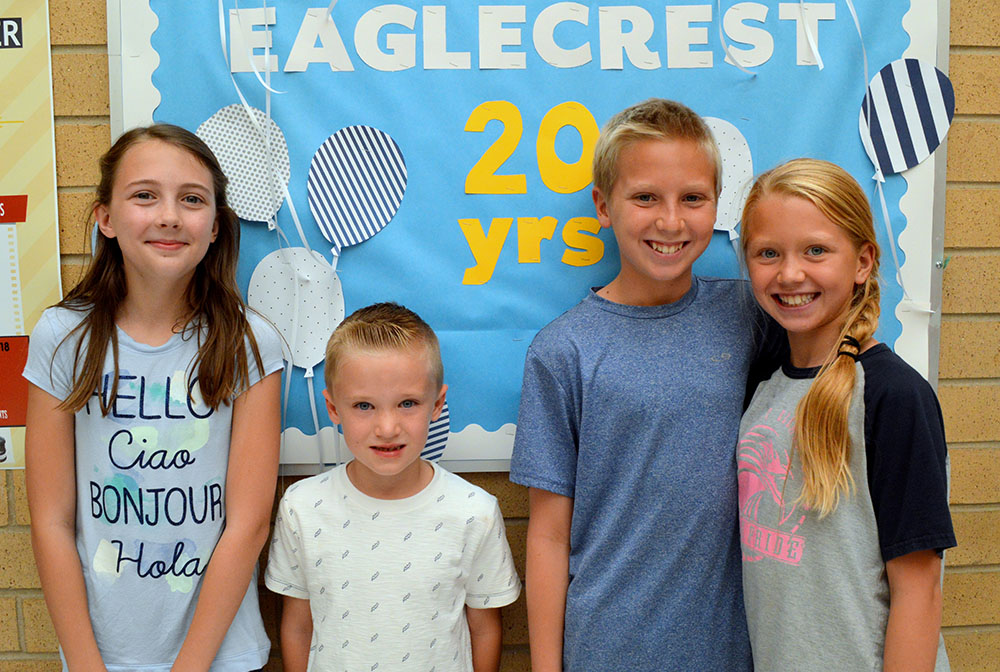 The Timpanogos Storytelling Festival holds auditions every year for school children to perform original compositions at the festival. Of the 21 children from Lehi who were chosen for this year, four of them attend Eaglecrest Elementary. Eaglecrest has its own storytelling festival, which has helped to spark the interest in some of their students to present their stories on a bigger stage.

The youngest of the Eaglecrest storytellers is Christian Walker, a first grader. Walker was still in Kindergarten when he wrote his story, The Corndog. “It’s about a fat rat. He holds a corndog and gets fat,” Christian explained. Walker said his Dad inspired him to write a story and audition for the Timpanogos Storytelling Festival.

Fourth grader Karalee Moir comes from a family of storytellers, including her brother Nathan Moir who will also be sharing a story at the festival. Kara wrote a story called P.U. Rapunzel. She tells the classic tale from the perspective of the evil woman who keeps Rapunzel locked in the tower. In Kara’s version, Rapunzel loves to eat onions and it makes her breath terrible – a cross for her poor evil captor to bear. The onions make Rapunzel’s hair grow, though. Kara’s brother Nathan said, “Kara’s always coming up with crazy stuff at dinnertime.”

Nathan Moir, a sixth grader at Eaglecrest, auditioned with his original story, Just Plain Peter. “It’s a new version of ‘The Boy Who Cried Wolf’ from Peter’s side,” Nathan explained. In Moir’s story, Peter cries wolf for attention because tending sheep is so boring. When the wolf really comes, all the sheep get eaten and Peter loses his job. “Peter becomes a Moral Mentor and goes around to schools and tells his story at assemblies,” said Nathan. There is also a B-story where Peter ends up working with his dream girl Jill, of Jack and Jill fame. Nathan Moir has been in the Timpanogos Storytelling Festival before. His favorite thing about being in the festival is getting free tickets to see some of his favorite storytellers like Bil Lepp and Daniel Morden. Nathan and Kara want to work on a story they can tell in tandem for the festival next year.

Mia Schoebinger is also in sixth grade at Eaglecrest Elementary. She is going to the Timpanogos Storytelling Festival with her story, The Girl Who Was Raised by Wolves. In Mia’s story, a girl raised by wolves is captured/rescued and she writes a book about her experiences and goes on tour with the book. Schoebinger’s Dad is a publisher and they’ve collaborated on stories before. Mia loves the festival and is excited to attend this year.

Heritage Day, a blast from the past

Railroad Depot restoration completed at no cost to Lehi City