Houston gets help from Lehi residents 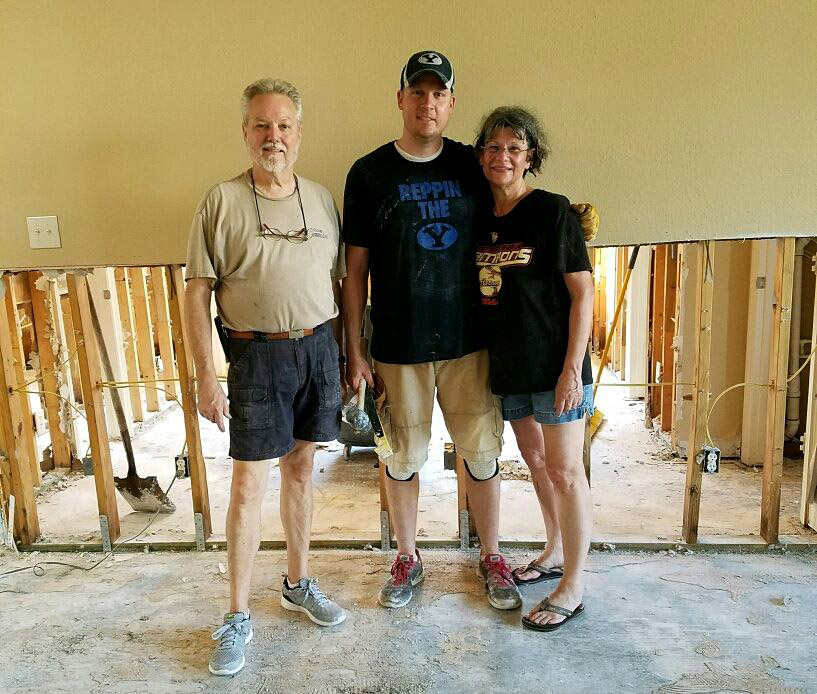 When Hurricane Harvey hit the Houston, Texas area leaving thousands of homes swamped, people across the United States sprang into action. Among them were Lehi residents Neil and Megan Andersen and their four young children.

When Neil learned that a colleague who lives in Houston had been hit hard, the situation struck a nerve and he began to consider traveling down to help. “Megan encouraged it,” he explained. “She knew I knew a lot of people down there. A lot of my clients are down there.”

Lehi resident Neil Andersen helped this Houston couple clear out their home which was severely damaged by flooding in the wake of Hurricane Harvey. | Courtesy of Neil Andersen

One of his clients was seven months pregnant and she wasn’t able to throw a birthday party for her son, who turned three the Tuesday after Harvey blew through. At first the client and her husband thought they’d avoided the worst of it. Only six inches of clear water had seeped into the house after the storm began to move out, so they went to bed feeling relieved as they saw the water beginning to recede. But they woke up the following day to three feet of mucky brown water filling the main level of their home.

Megan, who said it really touched her because she and Neil have a son about the same age, bought a birthday present for the three-year-old. Neil brought the present down to Houston along with a small collection of tools and went to work on the client’s home in League City.

“The whole neighborhood was mucking out,” he said. They ripped out sheet rock, carpeting, and flooring, and threw out unsalvageable furniture. The streets were lined with piles of debris.

Some people have wondered why so much furniture was thrown out rather than salvaged. Neil explained that because of the length of time the furniture sat in the water, the nasty condition of the water – “it smelled like rotten irrigation,” – and with the humid climate, nearly everything had mold growing on it by the time crews got to work clearing things.

The day after assisting his client, he came back to help a pair of her neighbors who were waiting for help from their insurance company that hadn’t come. “Most of the neighborhood had pretty decent help,” he said.

After helping in League City on Friday and Saturday, September 1-2, he headed down to Katy on Sunday and joined a group of LDS volunteers, donning a yellow “Mormon Helping Hands” vest. On the drive there he saw what he thought was a lake off to the side of the road, only to realize that the “lake” was filled with semi-trucks just barely showing above the water. It was a parking lot!

In Katy, much of the water had cleared out. The group Neil was working with found an elderly Vietnamese couple in great need of help. “They were emotionally paralyzed,” Neil said.

Neighbors of the couple thanked the group, explaining that they knew the couple needed help but they were all occupied with their own homes. One neighbor, seeing the yellow vests with their logos, commented, “I knew the Mormons would come!”

Neil said the couple had no family in the area, and as the group left the wife said to them, “You, my only family.”

Back in Lehi, Megan and the kids made a trip to Costco and loaded up with water, baby formula, toiletries and buckets. They helped load the supplies onto a truck headed to Houston. A neighbor, Heidi White, had gotten involved with the collection effort organized by her friend, Haley Bermingham, and alerted the Andersens to the opportunity.

The Andersen family helped load supplies on a truck bound for Houston. | Courtesy of Neil Andersen

Bermingham, also a Lehi resident, has set up a Facebook page for the newly organized group “Hurricane Helpers,” where information can be found about shipments now headed for Florida.

The Andersen family expressed feelings of gratitude for their opportunity to be involved. Neil travels to Houston a lot, and he said the feeling in the region was different in the wake of Hurricane Harvey. With an ethnically diverse community, there can be ethnic tensions that evidence themselves from time to time. But in the wake of Harvey it was different.

Driving out of the neighborhood on the last night, he saw a broken down car. As he stopped and got out to help, he was joined by an African American and an Asian man, all working together to help the stranded motorist. When he arrived at his hotel “just nasty, covered in sheetrock and muck,” people were literally running to help him with his things and get his doors.

He said the feeling was “palpable,” especially after the negative events of the previous week in Charlottesville, Virginia.

“Everyone was kind, everyone was patient,” Neil said. “At the hotel, at the airport, everywhere. To have something like this happen, while terrible, it totally resets your mind and your priorities.”

Bull elk spotted in Lehi field, then killed on I-15