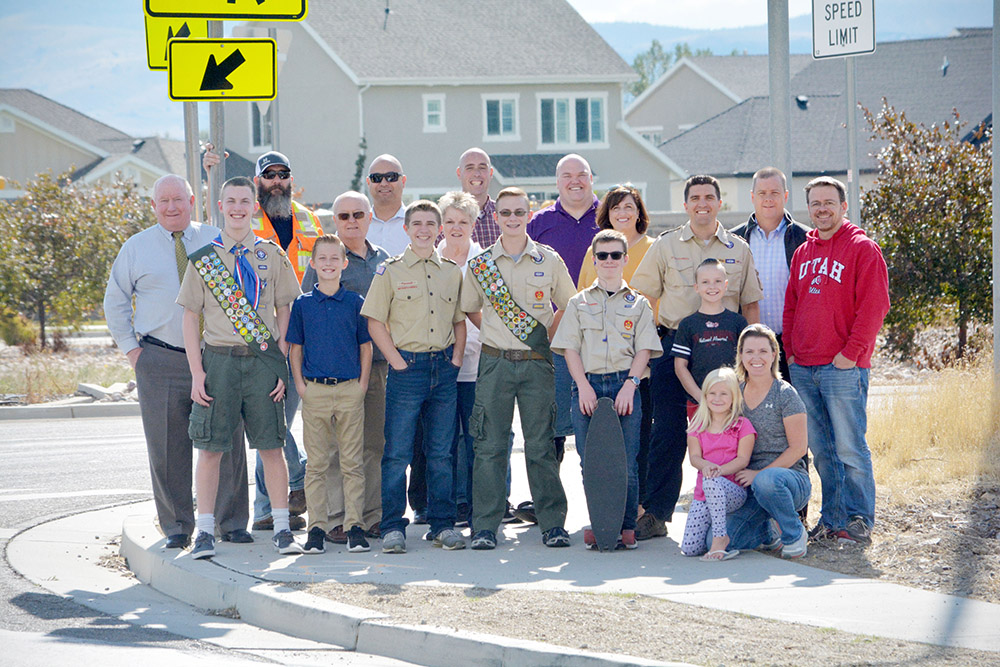 In January of 2017, Skyler Chapman discussed ideas for his Eagle Scout project with his family. Chapman wanted to do something that would have a positive impact on the city, friends, and family. The intersection near his home at 2300 W. 2100 N. was a traffic problem for the neighborhood. After getting BSA approval and getting Lehi City approval, Chapman finally got his project approved and started the process of quantifying the magnitude of the traffic problem so he could suggest a solution.

By April he had his project organized and began to collect data. After hours and hours of work, Chapman had his presentation ready to present to the Lehi City Council. They were so impressed with the project and how it was presented, they asked if Skyler would pitch his proposal directly to UDOT officials.

Ross Dinsdale of the Lehi City Planning staff reached out to Skyler and arranged a meeting with UDOT to present his findings. Wade Allred, Lehi City streets manager, also talked with Skyler about his presentation.

Shiloam shared the 10 to 30-year plan UDOT had for traffic in this area based on what they guessed the population increase would be in Lehi. Unfortunately, the numbers projected were wrong. Nobody expected Lehi to grow so fast.

Shiloam’s observations of the meeting were, “It was one teenager, his mom, a Lehi City planner, and about seven men and one woman, all from UDOT, or directly involved with transportation studies/planning.”

“One guy figured Skyler had done a few days of counting cars. Nope, two weeks. The guy pushed back from the desk and raised his eyebrows. ‘Most people don’t do that. Good job.’”

Because of Skyler’s efforts, changes are being made at the intersection. Road crews came through and sealed the cracks. The emergency lane under the railroad bridge and south of it have been taken out and now there are two lanes on both sides of the road. There is a turn lane at 2150 N. and one to turn into Point Meadow Drive. There is still space for crossing guards to park their vehicles during school hours so they can help children walk safely in the crosswalks. Citizens have commented how smoothly traffic is flowing since the improvements have been made

All this came about because one young man had an idea, worked hard, and had the resourcefulness and motivation to make a difficult situation better. Hats off to Skyler for a job well done!