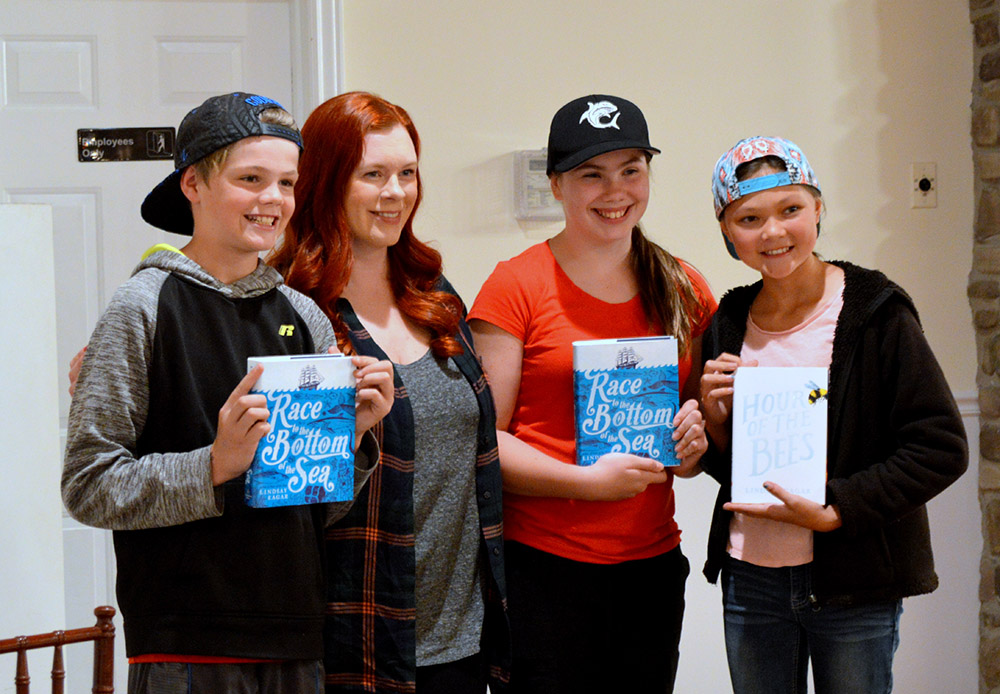 Author Lindsay Eagar launched her second book, Race to the Bottom of the Sea, with a pirate and candy-themed party at The Gardens at Dry Creek on Tuesday, October 2. Eagar celebrated her first book, Hour of the Bees, with a similar party and it became a huge success. Attendees could purchase Eagar’s new book, mix up their own soda or open a can of one of the author’s favorite drinks, eat fun food – including nautical-themed candy, and hear Lindsay talk about the story behind the book.

“I wrote this book before I wrote Hour of the Bees, my debut. It was born of a single obsession from when I was younger – sharks. To say I was obsessed is putting it mildly! Part of it was the danger, sharks are kind of scary, but they’re also gorgeous and super-cool animals,” said Eagar. She went on to explain that it takes a lot of practice to be good at writing and even longer to polish something to the point of it being worth publishing.

“The first version of what would become Race to the Bottom of the Sea that I wrote all the way from beginning to end in about 2009 was garbage,” Eagar said, punctuating her words with a slide on the screen next to her of a garbage truck launching paper into the air. “The thing about these first projects is that I felt like I was writing what I should be writing. I didn’t know the first rule of writing back then, which is: Write what you love, not what you know.”

Lindsay Eagar’s love for books, sharks, marine biology, pirates, and candy helped her to work toward the story that would match the picture in her head. She still wasn’t happy with the final draft, so she put her “pirate book” away in 2013 and moved on to other projects, including Hour of the Bees. For her second book, Eagar could feel many more eyes looking over her shoulder – people are aware of her now and expected more of her. With the help of her editor, Lindsay was able to write a book she loves so much that she doesn’t even care what anyone else thinks of it. The reviews for Race to the Bottom of the Sea, however, have been enthusiastic so far.

There are more books on the horizon for Lindsay Eagar. She says it takes her longer to get to the “good stuff,” and that she writes even more “garbage” now than she did before. Eagar writes every day and if she’s not writing, she’s thinking about her stories and elements she can add to her current projects. During a question and answer session, Lindsay explained her process and offered encouragement to the fans that came to hear her. “Every time I get all the way to the end of a book, I forget how difficult the process was – kind of like childbirth. All I see is the beautiful finished book. My husband and my family and friends have to remind me what it was really like!”

Race to the Bottom of the Sea is a story about an 11 year-old girl named Fidelia Quail whose marine scientist parents are killed in a tragic accident. Fidelia is kidnapped by Merrick the Monstrous, a pirate, because he needs her help to retrieve a treasure from the bottom of the ocean floor. The book is now available online and in bookstores everywhere.