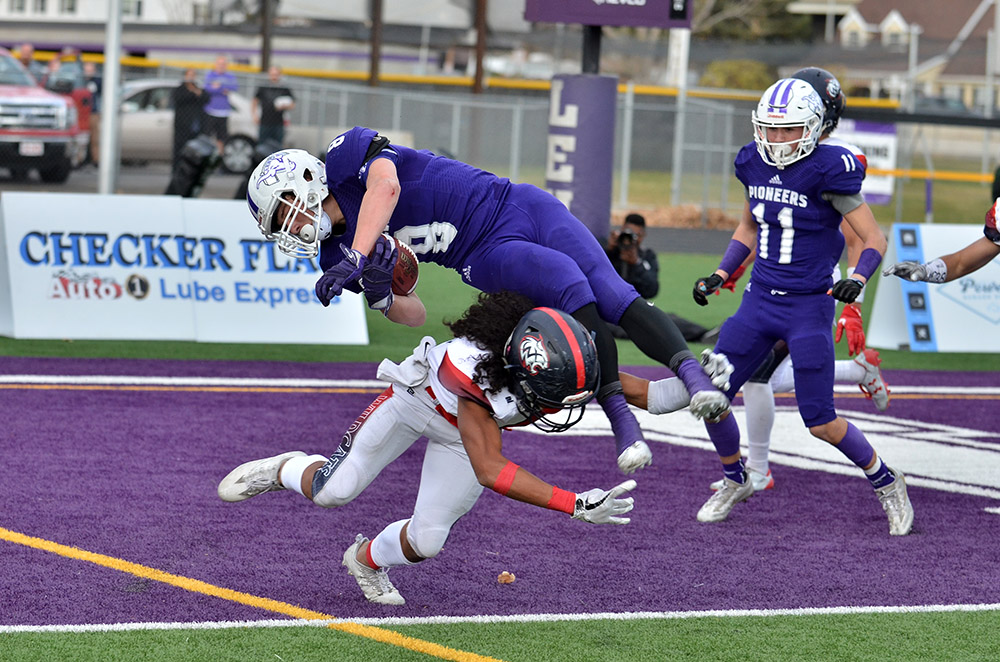 The red-hot Lehi Pioneers had a battle on the gridiron for the quarter final state football tournament last week against the Woods Cross Wildcats. At the beginning of the season Coach Larson talked about how the Pioneers needed to find a team identity, and that they needed to figure out what type of team they were going to be. It’s clear they found their team identity, and if anyone has questions about what kind of team they are, they need to read a press clipping.

With the offensive power attack of Cammon Cooper, Dallin Holker, Kade Moore, and other talented players, Lehi jumped out to an early 14-0 lead in the first quarter of the Woods Cross match up. The Lehi defense managed to keep the Wildcats from gaining traction in the first quarter.

The second quarter was almost identical to the first. A rushing touchdown for the Pioneers put them up 21-0, and the defense quickly went to work to get the ball back into the hands of the Lehi offense. And it paid off, before the end of the second quarter a passing touchdown put the Pioneers up 28-0, and it was very clear that the Wildcats didn’t have much in the playbook to stop the Lehi offense, or get by the Lehi defense.

To start the third quarter things remained a little quieter, but the Pioneers did manage to put another touchdown on the board. Giving them a 35-0 lead over Woods Cross.

It wasn’t until the fourth quarter, when Coach Larson put in some of his younger classmen, that the Wildcats finally answered back. Woods Cross put points on the board with a touchdown, making the score 35-7, and that’s how the score would stay for the rest of the game. The Pioneers ended the game with a dominant win over the Wildcats, and now move on to play the Springville Red Devils in the semifinals at Rice-Eccles Stadium on Thursday.

Many Pioneer fans are anxious about today’s game, since Springville has already beat the Pioneers once in regular season play. But with tremendous momentum on their side, many believe the Lehi team that will take the field are far better than the team that lost a heartbreaker to the Red Devils earlier. They’re healthier, they’re smoother. And they’re more confident. Anyone going to the game can expect an amazing game between two fantastic teams. “We’re going to get ‘em” said a long time Pioneer fan after the game against Woods Cross. We’ll see what Coach Larson and company does to prepare for the chance to make it to the big show. We hoping to see them survive and advance.