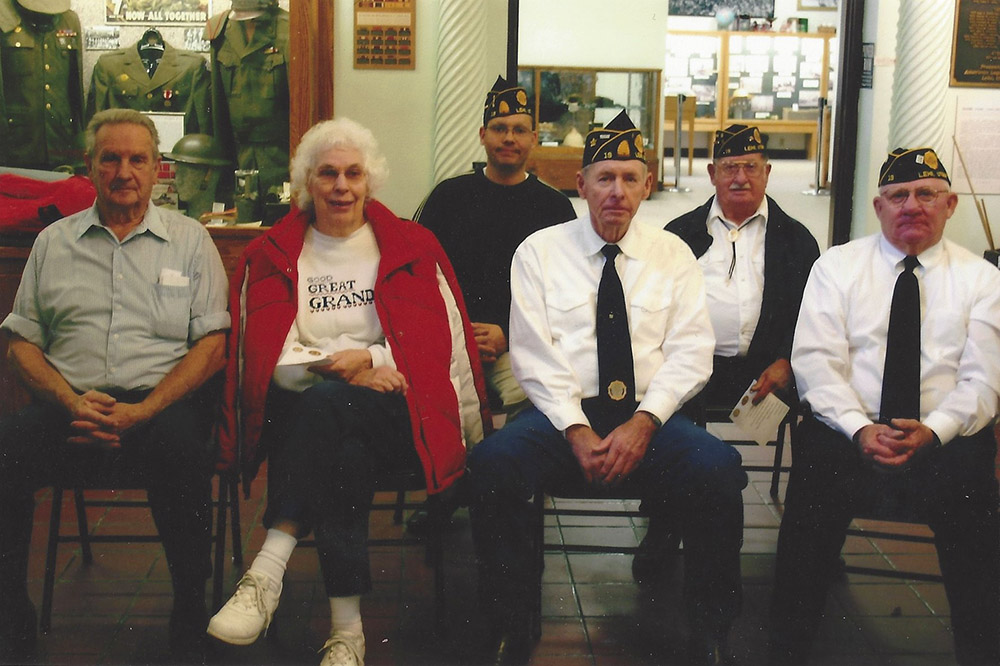 Sitting at the table in Karl and Virginia Moore’s tidy kitchen is like coming home. There is a quiet peace there. Pictures of family surround the area, tomatoes ripen in a crate outside the kitchen door, and evidences of resourcefulness, devotion, and hard work are everywhere.

When Karl talks about his war-time experiences, Virginia is quick to point out poignant details of their early years and his dedication to his community and country.

Karl joined the navy at age 17. His mother had to go with him to the recruiting office to sign. It was 1944 and many other young men felt the need to enlist. After boot camp and basic training, he was assigned to a destroyer/mine sweeper. The unit was to embark from San Francisco, then travel to Pearl Harbor and then on to Japan. Moore got the mumps and had to spend one month in sick bay. Two days before he was to begin his tour of duty, the United States dropped the atomic bomb on Hiroshima. Karl quips, “We fought the battle of San Diego.” He was assigned to a tug boat that brought battle ships into the San Diego harbor. “Those ships became our responsibility,” he continues. “It was a complex operation to get those ships into the harbor. Most of them were de-commissioned or scrapped. Those ships were pretty battered.”

Karl served in the navy for three years, 11 months and 23 days. He was engaged to a girl in San Diego when he returned home to Payson. Karl affectionately reports that he ran into Virginia when she was an orderly at the Payson Hospital where he delivered milk for Cream of Nebo Dairy. His first comments to Virginia were, “You look like you have had a rough night.” Virginia said, “I walked several miles to and from work.” There was no money for transportation. They had other chance meetings after that. Karl went back to San Diego and broke off his engagement, then Karl and Virginia dated for a year before they were married.

When he and Virginia moved to Lehi, Carl (Blackie) Harris invited Karl to join the American Legion. That was the beginning of 51 years of service. Karl has been the service officer for all   51 years. One of the projects he, Blackie, Harold Fenn, and Don Peet initiated was flying the American flag on Main Street during holidays. Holes were bored into the curb along both sides of Main Street. Early in the morning of a holiday, Karl, Legion members and even members of his family would put the flags along the busy thoroughfare.

When the flags would show signs of wear, Virginia would mend them. Harris even called Virginia, “Lehi’s Betsy Ross.”

Karl has been instrumental in planning and executing memorial services at Lehi Cemetery on Memorial Day. He has also helped raise funds and build wings on the Veteran’s Memorial Wall located in the cemetery. It was important all veterans buried in Lehi could be recognized.

Karl has been involved with the Girls and Boys State program sponsored by the American Legion. He has helped organize the Legion Oratorical competitions. Winners could eventually win a trip to Washington D.C. He laughs when he says, “We even sponsored a beauty contest, but we had no contestants.”

Karl currently serves on the Hutchings Museum Board as the American Legion representative and the Chamber of Commerce board.

As a member of the American Legion, Karl has had some unique experiences. “On day, I got a call from a desperate veteran. The family had just moved to Lehi. The dad and mom were both veterans. Their paychecks had not gotten to them. We bought groceries and gas for the family. We are here to help veterans who fall on hard times or are needing help.” Karl says, “I really enjoy my service. I have had some wonderful experiences.”

Karl and Virginia are the examples of why those born in the early years of the last century are called the “greatest generation.” They value the sacrifices of men and women who have served and who currently serve in the military. The Moores exemplify the time-honored values of hard work, love of Country, resourcefulness, and family. With a posterity of 155 and with two more babies on the way, their influence will be felt for many generations to come.