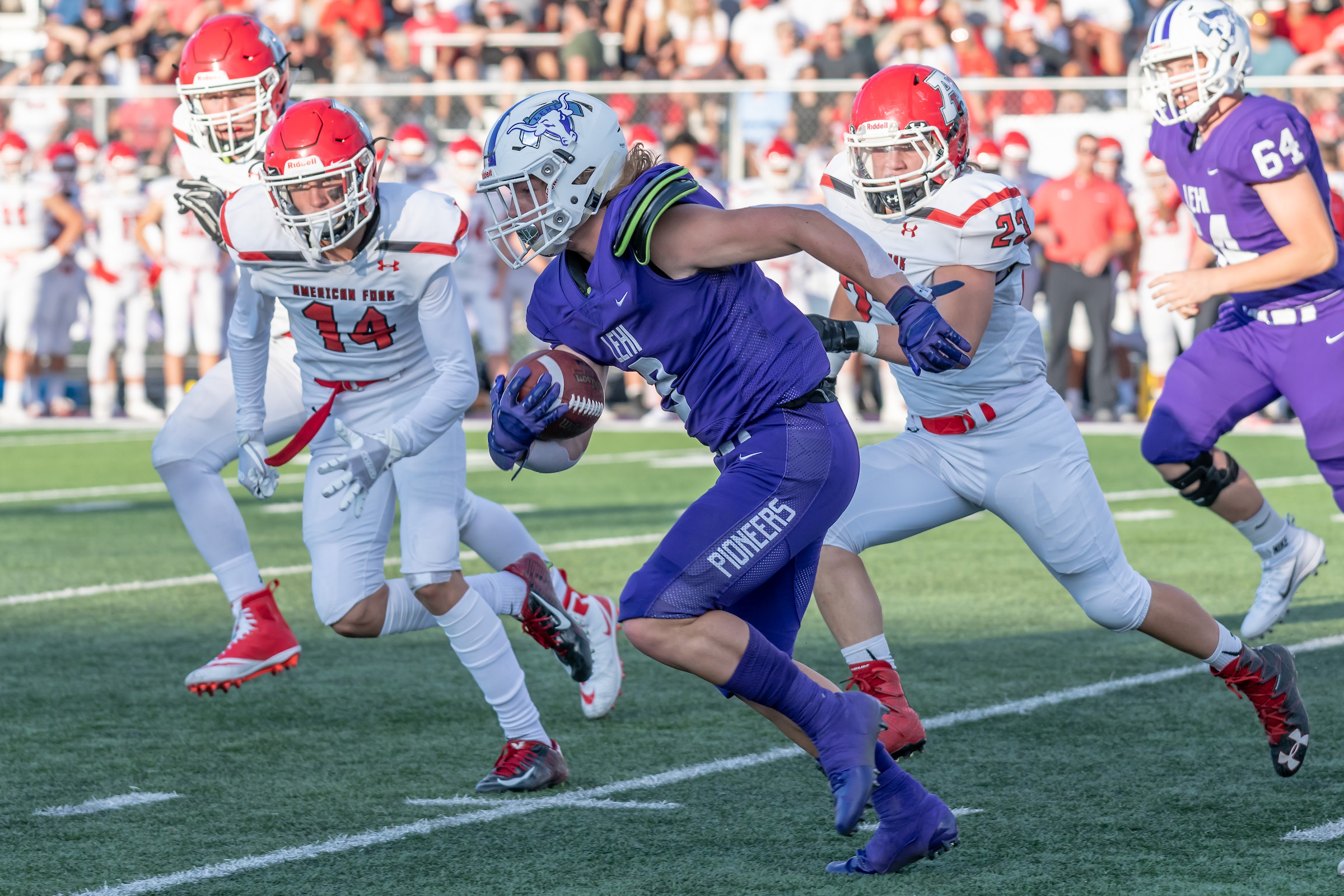 The Lehi football team opened the season Friday night hosting Utah County rival American Fork in a non-region game. After winning the 5A state championship in 2017, the Pioneers finished 5-6 last season. They are looking to improve on last year’s record but faced a talented American Fork squad in the first game. The Cavemen are coming off an outstanding season (11-3), losing a close game to Lone Peak in the 6A championship. In this contest under Friday night lights, American Fork defeated Lehi, 27-14.

The Lehi offense moved the ball on American Fork, gaining over 300 yards of total offense. However, they were unable to sustain drives to generate scoring opportunities. Quarterback Creyton Cooper completed 22 of his attempted 41 passes for 229 yards and two touchdowns. Wide receiver McKay Wall caught 10 passes for 108 yards and one touchdown. Isaiah Tauai, a state medalist in the 110-meter hurdles last spring, had 10 receptions for 83 yards and one touchdown. Three-year starting running back Carsen Manookin gained 112 yards on 15 carries.

American Fork scored first with a field goal late in the first quarter. They led 10-0 after adding an 8-yard touchdown pass early in the second quarter. Lehi got on the scoreboard with two minutes remaining in the first half when quarterback Creyton Cooper connected with senior wide receiver McKay Wall on a 57-yard touchdown pass. Wall caught a long pass, avoided having the ball stripped by an American Fork defensive back, and then ran from the 20-yard line into the end zone untouched. The Cavemen led 10-7 at the end of the first half.

American Fork received the ball to start the second half. They converted this possession into another field goal, making the score 13-7. After forcing a Lehi punt, the Cavemen scored a rushing touchdown about four minutes later. The score at the end of the third quarter was American Fork 20, Lehi 7.

The Pioneers made the game interesting with about eight minutes remaining in the fourth quarter when Creyton Cooper connected with wide receiver Isaiah Tauai for a seven-yard touchdown. That play cut American Fork’s lead to 20-14. Lehi forced the Cavemen to punt on their next possession but turned the ball over on an interception. American Fork scored another rushing touchdown with about four minutes remaining to seal the victory. The final score was American Fork 27, Lehi 14.

Pioneer defensive back Jaxson Southard forced a critical fumble preventing a likely American Fork touchdown at the end of the first half jarring the ball loose from the Cavemen receiver at the goal line. Maopatasi Young recovered the ball in the end zone for a touchback. Linebackers Tyler Ehat and Christian Wren led the defense with nine tackles each. Ryder Hatch had one sack.

The next opponent for the Pioneers will be the 4A Crimson Cliffs Mustangs. Kickoff is scheduled at 7 p.m. at Lehi High School. Crimson Cliffs is a new high school in the Washington County School District. They lost last week on the road to the Manti Templars, 27-14.