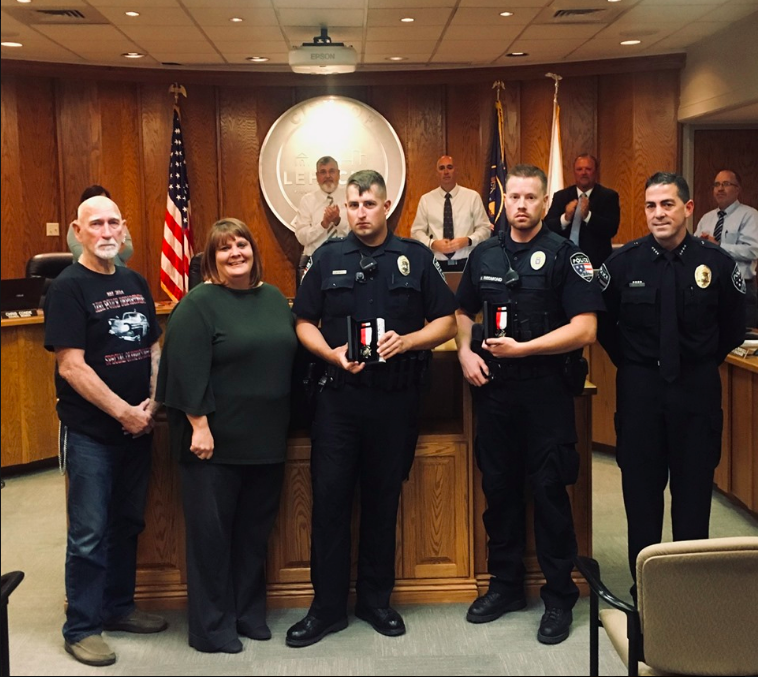 The Lehi City Council convened Tuesday, September 10 in the Council Chambers with all Counselors in attendance excluding Mike Southwick, who was excused for a funeral.

Lehi Police Chief, Darren Paul, opened the meeting by presenting the Life Saver Award to Lehi Officers Curtis Redmond and Wyatt Smith after their life saving heroics. Chief Paul read a letter he received from Lehi resident Brock Susov, expressing admiration and gratitude for the officers’ service. Officers Redmond and Smith responded to a call from Lehi resident, Kim Covington, who found her husband Kay Covington (72) unconscious at their home. The officers responded to the emergency call within three minutes and are credited with saving Covington’s life. Officers Redmond and Smith received the award from Chief Paul with the Covingtons in attendance. The presentation concluded with a standing ovation from everyone in Council Chambers.

The open citizen comment portion of the meeting was monopolized with resident concerns about parking and speeding around Skyridge High School. Ronalin Meck spoke for her neighborhood, asking the City Council to find a solution regarding students parking on their street. Meck pleaded with the Council to address the situation with “No Student Parking” signs because of the safety concerns and the inconvenience her neighborhood is facing. Meck cited issues such as loss of visibility, trash, and the inability for snowplows to properly access their street. Mayor Mark Johnson and City Administrator Jason Walker expressed willingness to investigate solutions and see what can be done. Mayor Johnson cautioned the request by saying “We have to be careful because anytime we protect someone else, we may be infringing on somebody else’s property rights.”

Consideration of Concept Plan approval for the Gardner Batt 1200 West, an 8.12-acre commercial development located at approximately 2900 North 1200 West (Tabled from August 27, 2019) This item was withdrawn by the applicant until a later date.

Consideration of Final Subdivision approval for the Ridgeview Townhomes Phase 2, a 34-unit residential development located at approximately Traverse Terrace and Morning Vista Way by Perry Homes. This was unanimously approved.

Consideration of Final Subdivision approval for the Vivian Estates Phase 2, a 34-unit residential development located at 2600 North 600 East in an existing RA-1 zone by Focus Engineering. This was unanimously approved.

Consideration of Ordinance #64-2019, a Development Code Amendment to Chapter 23 – Temporary Signs, modifying the requirements for temporary on-premise signage by Lehi City. This resolution allows property owners to have larger on-premise signage based on the size of the parcel. This was unanimously approved.

Consideration of Ordinance #63,2019, Amending Section 10-2-1 to adopt the most recently promulgated versions of the various building, construction and fire codes as part of the Lehi City Code by Lehi City. This was unanimously approved.