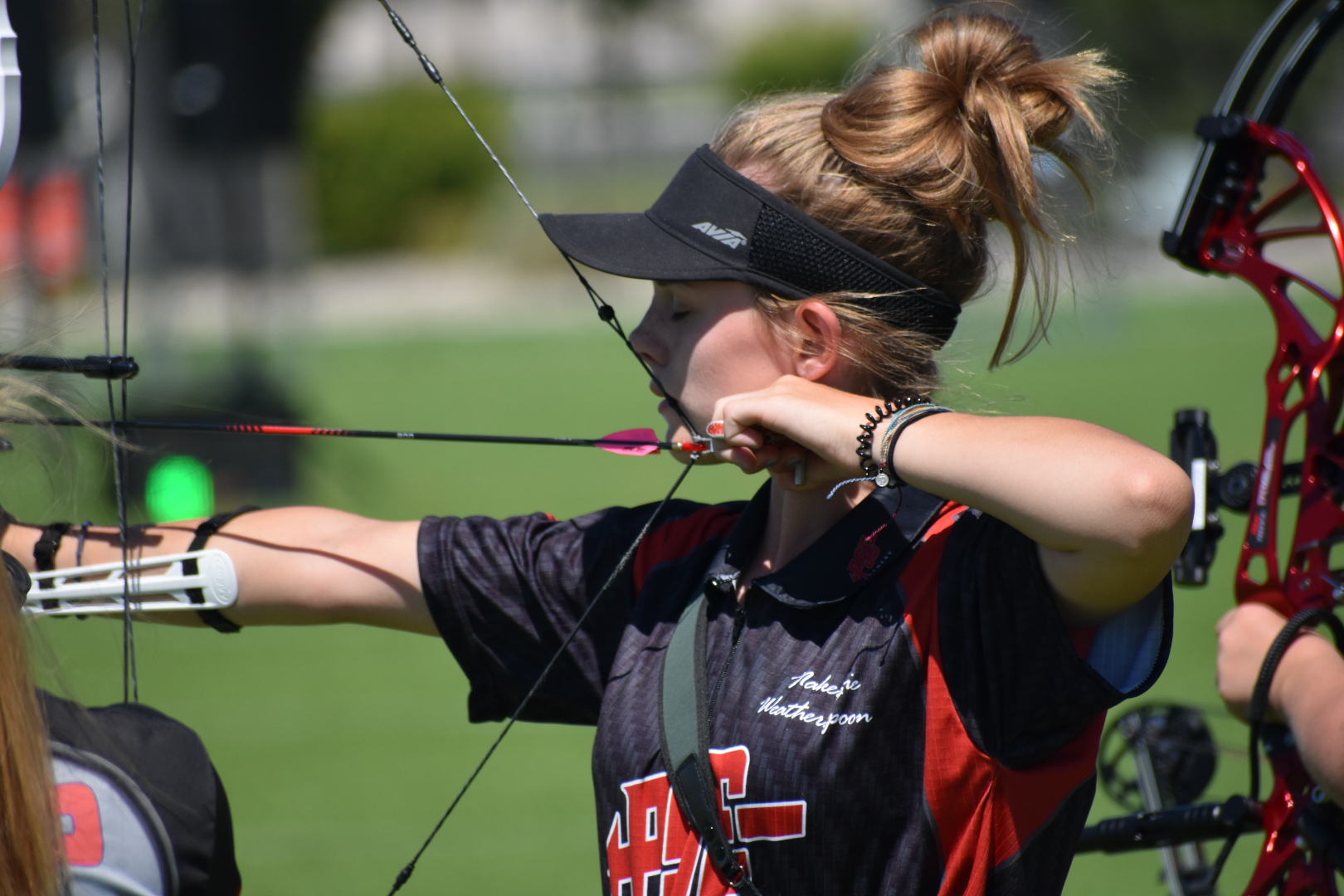 Makenzie Weatherspoon, a 15-year-old student at Lehi High School, traveled to the World Archery Youth Championships in Madrid Spain at the end of August and brought home a gold medal as part of the three-member United States Compound Cadet Women’s team, and a silver medal in the mixed team competition.

In October 2018, Makenzie Weatherspoon made the decision to focus on archery full-time with the goal of making the U.S. team. That decision meant quitting the cheerleading team and traveling to competitions all over the country during the summer months. “It’s frustrating sometimes to have to say ‘no’ to hanging out with friends – I still want to be a kid,” said Weatherspoon. Her hard work and sacrifice paid off big on the world stage.

“I have been doing this for a really long time. Being able to shoot for the United States Archery Team in an international setting – hardly anyone can say that. The whole thing was so surreal!” said Weatherspoon. “That two-and-a-half minutes standing on the podium with a gold medal around my neck, wearing the United States jersey, and listening to the national anthem was worth every sacrifice over the last six years,” Weatherspoon continued. “I wouldn’t change anything.”

Even after all these years of shooting, Weatherspoon still gets nervous when it comes to competing. She focuses on the steps of shooting, relying on muscle memory to calm herself down and perform her best when it counts. “I know how to set my hand. After that I know how to set my other hand, then set the bow. I know how to anchor, then aim, then execute. A lot of times the pressure of the situation sets in and I forget everything, and my legs turn to Jell-O!,” explained Weatherspoon.

Makenzie Weatherspoon, the youngest member of the Cadet team made up of 15-17-year-old young women, qualified highest during the Cadet competition and earned a place on a mixed team with the highest qualifier from the male Cadet team, Cole Zeug, from Minnesota. Weatherspoon and Zeug ended up in the gold medal round for the mixed partner teams after doing well in a bracket-style competition. Weatherspoon and Zeug won the silver medal for the United States, the only two members of the 24-person U.S. team to bring home two medals from the World Championships.

It’s hard to beat winning a gold and silver medal at the World Archery Youth Championships, but Makenzie Weatherspoon has already made new goals while she was still in Spain. “Coming home from dinner one night in Spain, I set a goal to one day in the next five years be ranked the number one Senior woman in the world. That’s a crazy goal, but I think that if I keep practicing and stay away from injuries, I’ll be able to do it,” said Weatherspoon. The Senior division for compound archery is for women over 21 years of age.

Meanwhile, Makenzie is using her knowledge of what practicing can do to get through math assignments and other homework drudgery. “Since I got back from Spain, what I’m doing at school and in my life has more meaning to me. I competed at the highest level on the world’s stage! I can get through a math test. I can get through anything,” said Weatherspoon.