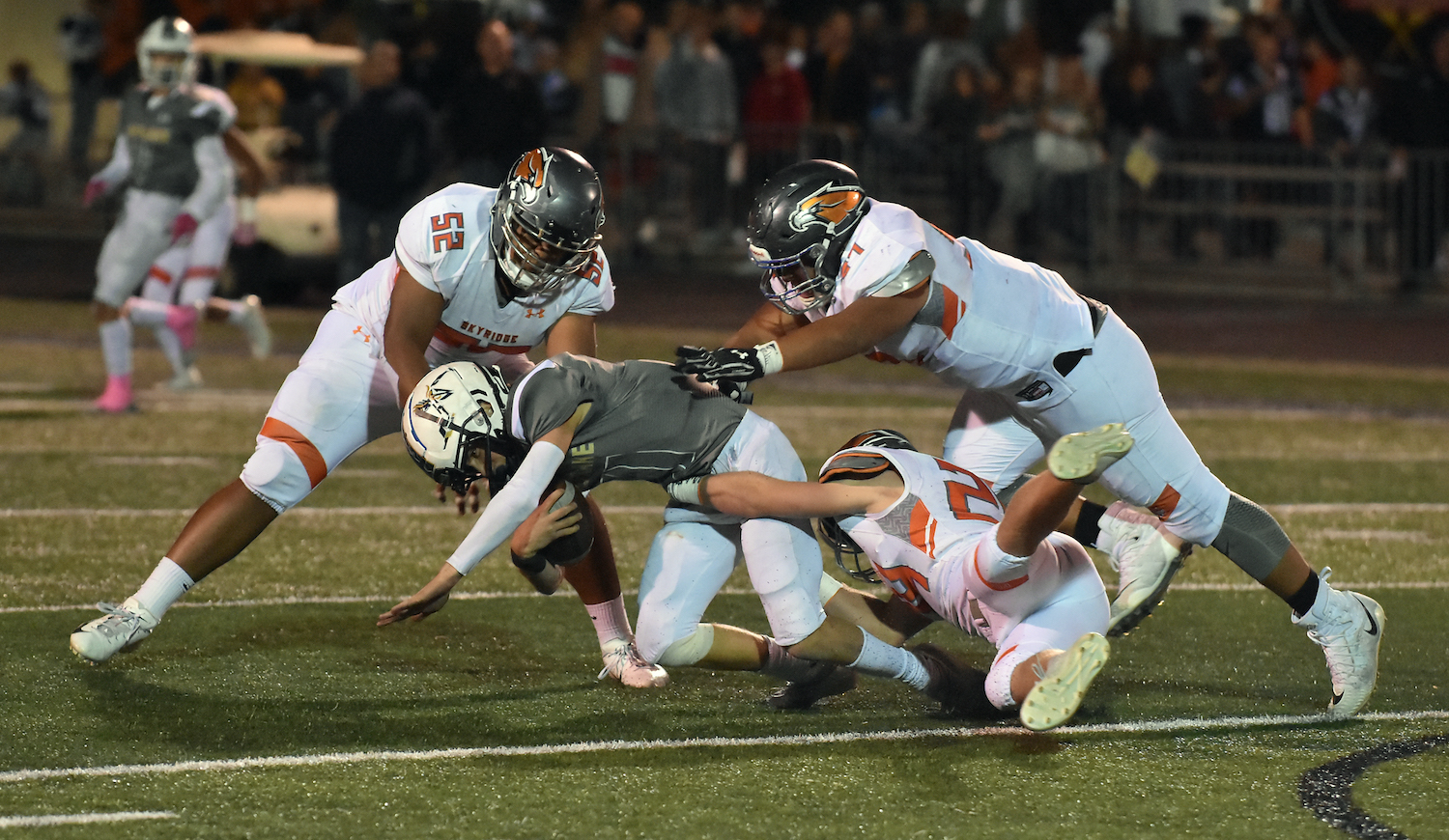 Wednesday Night Lights proved victorious for the Skyridge Falcons as they conquered the Westlake Thunder for an exciting 34-29 win. The Falcons jumped out to a 21-0 lead in the first quarter and shielded the Thunder’s storm to secure the Region 4 victory on the road.

Falcon running back, Jeter Fenton scored first on a three-yard run. Casey Keeslar completed the PAT and the Falcons’ 7-0 score lit up the scoreboard. The energy of the Falcon offense in the first quarter ignited the field as quarterback Emmett Call scored with a two-yard run into the endzone. Falcon receiver, Dylan Samuels finished up the first quarter lead with a 28-yard catch for a touchdown.

The Thunder quickly answered in the second quarter of the game as Brayden Ross connected with Jet Vance on a 19-yard pass for a touchdown. The Thunder defense held off the mighty Falcon offense and ended the half with a 21-14 score.

Falcon receiver Mitchell Adamson said, “We got the win and that is what matters. At the end of the day we aren’t satisfied, and we want more.”

“The defense needs to clean some things up but overall played very well and a reason we ended up with the win. We need to get better every day and we can’t take a day off. We need to work on our craft and get better at the little things so we can come out strong and ready for the playoffs” said Falcon safety, Bowen Thomas.

With less than a minute left in the game the Falcons finished strong as Adamson caught a pass from Call in the endzone and with only six seconds left on the clock, the Falcon defense took away the Thunder ball to secure the Falcon victory. Adamson said, “It was a great experience to make a catch on the last drive.”

Skyridge head coach, Jon Lehman said, “It was a good fight to the end. Westlake gave us every shot that they had and I am proud of our guys for responding at the end of the game after going down and Westlake taking the lead, they moved down the field, scored a touchdown and finished with a takeaway to end the game.”

“It was a good win. We started off slow but we picked it up at the end. I liked the way that we finished but we got a lot of things to work on and improve,” said Falcon offensive lineman, Dakota Dixon.

Lehman said to the team, “I’m proud of how you finished the game. We need to go to work and focus with passion and drive. We want more, we give more.”

With the Wednesday Night Lights victory, the Falcons improved 7-2 overall and 3-2 in region. The hard work of the Falcons paid off with an important region win. The Falcons ended the regular season with a second place overall in Region 4 (prior to Lone Peak forfeiting their games) and fourth in the 6A state classification. Skyridge will have a bye this week as they prepare for their first game in the second round of state playoffs scheduled for Friday, November 1st, 4:00 PM at home.