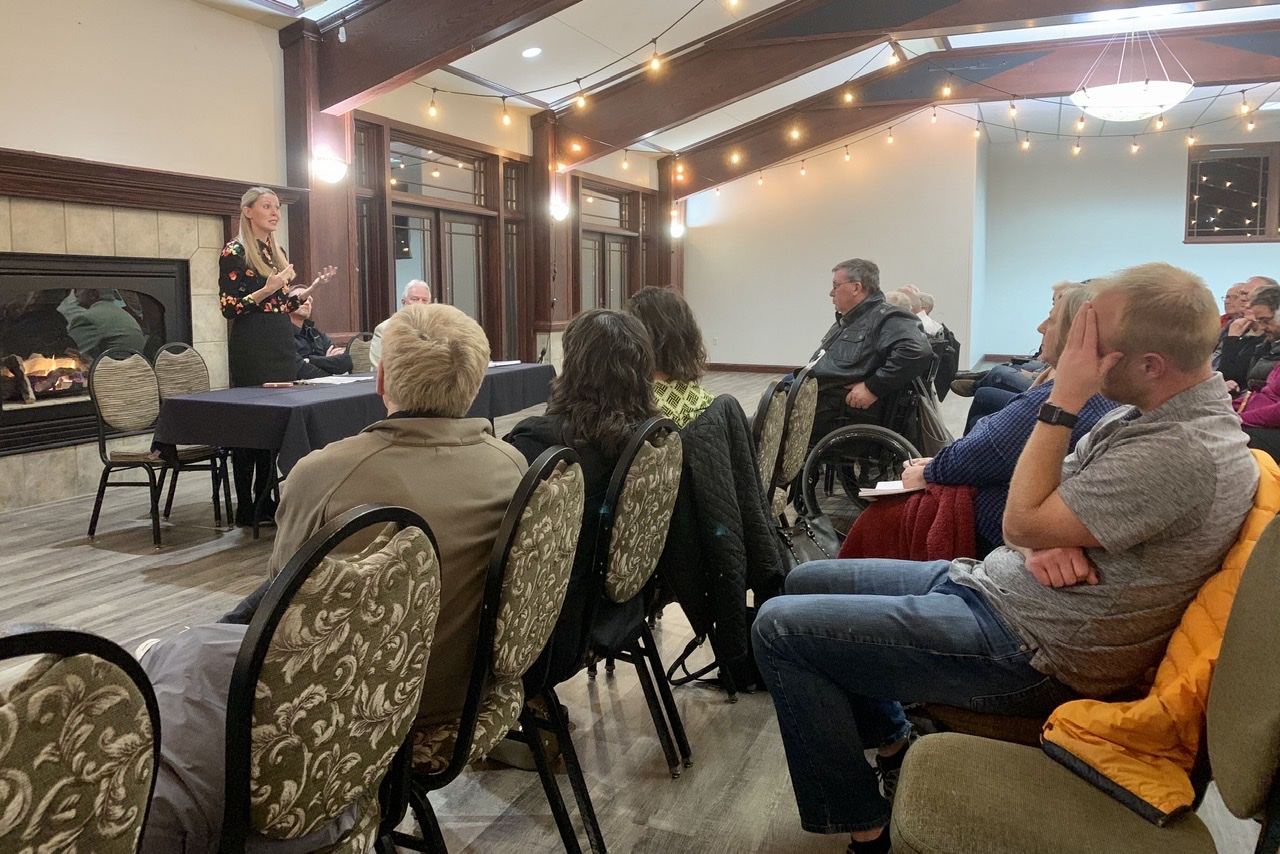 On Wednesday October 30, less than one week from Election Day, Thanksgiving Point residents from different neighborhoods in the area, hosted a City Council candidate Town-Hall. The meeting was held in the Thanksgiving Point Golf Clubhouse and led by a local HOA President, Rachel Asbury. In attendance were Katie Koivisto, Cody Black and Mike Southwick, although Asbury noted that all six candidates were invited but some were not able to attend due to the last-minute nature of the meeting.

The crowd of about 30 residents was a lively one. Many residents expressed frustration and anger throughout the meeting, fueled by Koivisto and Black’s message of “change”. The topics discussed were all related to the interests of the Thanksgiving Point area and its residents.

The first question posed to the candidates was their stance on the potential rezoning of the Thanksgiving Point area plan. Koivisto was first to answer with her defense of ‘no changes to the area plan,’ “It’s definitely not fair to the residents of my neighborhood, who paid a pretty penny for those lots. They were under the impression that their homes were going to have that view.” Black followed by asking for clarification on the question and said he wasn’t privy to the situation or area,“What area are they talking about?” Asbury jumped in to respond with an explanation on the resort community zone requirement of 700 acres minimum. Southwick concluded by saying “I want the resort community to stay as it is and that’s why we denied the five acres [Ivory requested to remove from the resort community] last month.”

A hot topic with an emotional history was next. “What is your position on a potential road through the golf course?”Koivisto, who’s campaign has been funded ($6,500) by David Meine, a resident of the Thanksgiving Point Golf Course area,and opponent to the previously proposed road, was first to passionately express her displeasure for the road, “I got a lot of negative feedback from the City Council at the time [when saying the road was a bad idea] and it was really disheartening. I felt like there was a personal agenda, this is my true feelings speaking, and I couldn’t figure out what that agenda was. Fast forward to now, when I sat down with Mayor Johnson before the primary, I still felt there was a personal agenda. I want to be the squeaky wheel that makes sure this doesn’t happen.” Koivisto didn’t elaborate on what Mayor Johnson’s or the City Council’s “personal agenda” was.

Black took a different approach by saying “I would like to ask you guys that live here, because you know this area, I don’t live here, I don’t know the area, I could have an opinion and say we should go here but I don’t know if that’s good, everything looks good on paper.” A resident then questioned how Black would balance the residents’ desires with the city’straffic needs. Black responded, “if UDOT is set on building a road, they will, I don’t even think the City Council has a say,but the Mayor does.”

A resident in the crowd then vocally expressed dissatisfaction with Mayor Mark Johnson, “I realize the Mayor has a lot of power, but when he makes a public statement, as he did in one of our recent meetings, if you could see what’s coming, none of you are going to be happy, and I think to myself, who do you work for? who voted you in? His interests don’tapparently concern any of our interests.” Regarding the higher-density housing in the area, the resident continued by saying “We were told all these condominiums, that people would take the train, well we all know that’s stupid, that’s not going to happen.” Then another resident interrupted her and said “Yes, we do take the train.” In which the first resident replied,“Come on, Dean, who’s side are you on?” to chuckles from the crowd.

As the golf course road discussion continued, the crowd became restless with anger toward the current administration with one resident bringing up a past meeting. “We had a comment from Paul Hancock, he even walked out of a meeting to begin with and then he tells us we aren’t working with them the way other people are and we need to work with them to minimize the impact of the road and not stop the road. How do you minimize losing the golf course and selling off all the land?” He continued, “The way we stopped it [the proposed road through the golf course] was working with the other cities’ mayors, not our own, he was angry that we took $9.2 million dollars away from Lehi.”

The accusations against Mayor Johnson continued with another resident saying, “Is there a benefit for him we aren’t aware of?” Councilman Southwick quickly refuted that claim,“Oh heavens no.” The moderator, Asbury, stood up to bring the group back on track by reading candidate Matt Hemmert’s written response which opposed the golf course road but noted he would be in favor of a connector north of Thanksgiving Point. Koivisto challenged Hemmert’s answer “Keep in mind with that…Matt is also on the Planning Commission and he approved the road going through the golf course, so that is interesting that he would say that.”Southwick concluded the road discussion by defending Hemmert, “A concept plan is just that, a concept plan.”

The last moderated question was regarding the proposed 1,800 housing units on the current Cornbelly’s site. “What is your position on the construction of the 1,800 units?” A resident in the front row added to the question by asking “Would you support a moratorium on building if you were on the City Council?” Black replied “I want to favor that but I would want to do that legally,” while also adding, “I want to design a concept that any future development pays for itself, what I mean is schools, parks, baseball fields, fire stations, maybe a gym and pool, those people who live there are going to need those things.”

None of the candidates had a response to Black’s proposal, which would violate state impact fee laws. Koivisto then responded to the residents’ proposed building moratorium,“Other cities have done it, Saratoga Springs will be voting for it this November.” The resident then responded, “We asked the Mayor this and he said we can’t do that because people own property and they can do whatever they want with it.”Koivisto passionately refuted, “Nope, that’s not true, no, that’s incorrect.” The resident concluded “I would like to see a 5-year moratorium on all building.”

Southwick and Hemmert in their response mentioned the idea and possibility of a Transit Oriented Development (TOD) in Thanksgiving Point to help alleviate traffic because of proximity to the FrontRunner Station. A resident in the attendance expressed an opposing view, “The people who live in apartments live there because they can’t afford a home. These aren’t the people who take Trax to Salt Lake City for a job, these are the people working in the outlets, in the fast food industry, the people working down the road cleaning up the hospital. To get back and forth from their job, they will be driving. The people that use the Trax live in the area and have access to it to begin with and have a position someplace and can take Trax to where they are going.”

Black who has vocally opposed larger corporations and incentives, was challenged by Southwick who said, “We haven’t given incentives for many years and people now want to come here to Lehi.” A resident in the crowd also challenged Black and wanted the group to realize the numerous benefits that larger corporations bring to the community “These businesses employ a lot of our local people, there are a lot of jobs because these businesses come in. There are hundreds and hundreds of our own residents who are employed by these companies. So, we do get some benefits.” Koivisto responded by stating that “Only 20% of Lehi residents work in Lehi” and despite her support of a moratorium on building said, “The goal is to get more people to live and work in Lehi.”