Expedition trekkers have adventure of a lifetime 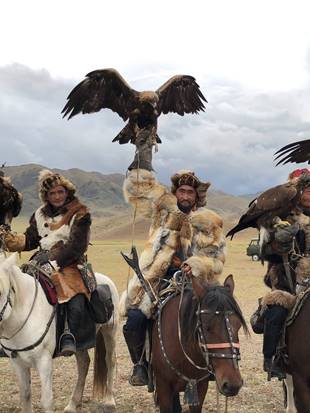 “Long, but amazing” is the resounding statement about the Hutchings Museum trek to Mongolia and Mount Everest Base Camp. In an interview with trekkers Spencer Ledbetter, Camilla Larsen, Conner Beus, Emily Larsen, Charlie Larsen, Thomas Blackwelder, and Leah Stutz, seven of the 14 who travelled with the museum group, the thrilling sights and experiences of cultures on the other side of the globe make for some truly amazing stories.

The group’s first stop was Mongolia. In the capital city of Ulaanbaatar, the first thing people noticed was how crowded it was. Charlie Larsen said, “The city is packed and crowded, but the people were very kind. One third of the population of Mongolia lives in the capital city.”

Right away, the group noticed how different countries and cultures view world history and said that one of the benefits of world travel is getting to see them from a different viewpoint.

“Mongolia is right in the middle of Asia, so they have Russian influence, Middle Eastern influence, and traditional Mongolian, so it’s a melting pot of all these cultures. Looking at a map you wouldn’t think anyone would live in this barren place, but they do, and they’ve been there for a long time. It’s so neat to see how people have used and blended all these different influences to create something of their own,” said Thomas Blackwelder.

Something everyone said was unexpected was the Russian influence seen throughout the city. “The Russians are very loved in Mongolia. Russia’s alliance helped Mongolia by establishing better borders, protecting them from people trying to take their land, and brought better schools and infrastructure,” said Camilla Larsen.

“The communist culture that was brought in from Russia still affects the country. For example, everyone that has the same job gets the same pay. Throughout their whole culture, that’s been the way it is. It’s helped more people get jobs, but it’s also been harder for people that work hard to get more money. These ideas have been passed down by previous generations, and even though they practice strict communism and Russia doesn’t anymore, it’s seen in a very different way than we do in American and most western cultures,” continued Conner Beus. The group went to a museum about space exploration, Camilla said, “It’s was this amazing museum about the space race, but all of it was from the Russian perspective. They are so proud of the contributions Russia made toward space exploration then and now.”

Leaving the city, the group traveled to remote parts of Mongolia to attend the Eagle Festival and stay in Ger’s, traditional Mongolian homes, more familiarly known as yurts. The group stayed in a ger that a man occasionally rents to people to supplement his family income. The owner proudly told the group that just a month before their arrival, Donald Trump’s oldest son rented the very ger they stayed in.

“Ger’s are traditional nomadic homes that they can pack up and take with them when they move their herds. You wouldn’t think it by looking from the outside, but inside is warm and comfortable, with very vibrant colors used to decorate and insulate them. They even have Wi-Fi!” said Camilla.

The highlight of the group’s travel to Mongolia was the Eagle Festival. The golden eagle festival is held on the first weekend of October in the far west of Mongolia. The festival is held in Mongolia because of modern borders but is organized by local Kazakh communities. Emily Larsen said, “It was a little scary at first. People were dressed in wolf skins and all these different furs. They had eagles on their arms while riding in on horseback. But it was so cool.”

“They ride their horses from wherever they are currently living. No one drives. Every year, the festival is at this specific location, this one hill. They do all these different events, like they will have their eagle perch on top of the hill, then they ride their horse down the hill and call to the eagle come to them. Another event is dragging a goat or rabbit skin behind their horse and they have the eagle fetch it and bring it to them. It’s all judged on speed and accuracy” explained Spencer Ledbetter.

“They work for years with their eagles to have them recognize their specific call. From what I noticed; they have a very different relationship with their birds than falconers have here. It seems like a more personal and familiar relationship,” said Camilla

Part of the Hutchings Museum plans included presenting a Golden Eagle feather, given by the Native American Shoshone tribe of Utah. Traveling with this feather from a protected eagle would not have been possible without a signed letter from the tribal council and the Governor’s office.

The favorite part of the Eagle Festival was also the most unexpected. “At the end of the festival, told us they would have an Eagle Dance. I was expecting it to be very traditional, something along the lines of Native American Hoop Dancing. But when they say Eagle Dance, they are actually dancing with their eagles. They turned on music and just started jamming out. Everyone is dancing in a big group, and they told us to join in,” said Camilla.

“The birds were on their arms, shoulders, and heads. Everyone was dancing like crazy. The eagles were flapping their wings, which were really long. People kept getting hit in the face by eagle wings, which if you have to get hit in the face at a dance party, it’s pretty cool that it’s by an eagles wings!” said Ledbetter. “They love music and dancing, and they love their eagles, so when there’s a chance to get together it’s so much fun” continued Charlie.

Another activity the group enjoyed experiencing while in Mongolia was horseback riding. “We got to do a lot of riding on their horses. These Mongolian horses look like ponies to us, but they are so tough. It’s amazing how much it’s like the Wild West. They ride horses and herd their goats and yaks in a harsh climate. One minute is warm and the next it’s snowing” said Blackwelder. “While we were on the horses, I got thinking about what they think about life, what it’s all about, and why they are doing what they do. Our guide told me no, not really. He said his life is just about getting up in the morning, milk the yaks and tend the herd, have breakfast with your family. Then do it again the next day and on and on. He seemed content and happy, and that’s something that’s really stuck with me” continued Blackwelder.

From Mongolia, the group traveled to Nepal where they awaited their flight to Lukla. In north-eastern Nepal, Lukla is the most dangerous airport in the world due to its high elevation on the mountainside of the Himalayan mountains. The group waited for three days for their flight, as cloudy conditions make it impossible to land on the very short runway that ends at a cliff.

The trek to Mount Everest’s base camp was as much a mental challenge as it was physical. The thing the group came to dread the most was stairs. “Stairs and more stairs. You walk. A lot,” said Emily. Trekking to base camp takes seven days, with two days dedicated to rest and acclimating to the high altitude. “You stay in tea houses, little lodges where people rent out rooms to tourists hiking Mount Everest. You’re lucky if you get a flushing toilet. There’s no running water, the rooms have cots and that’s about it,” Camilla explained. Regarding the rigors of the trip, Camilla said, “if you don’t have the right attitude or mindset about the hike, no matter how you start out physically, you’re not going to make it.” The extreme altitude affects each person differently and can vary from time to time. The symptoms can range from headaches and stomach aches, to shortness of breath and should never be taken lightly. “Each time a person hikes to base camp, their body will react differently to the altitude. Just getting to a lower elevation helps” explained Beus. Seven of the 14 people that hiked were able to make it all the way to Base Camp.

The beauty and majesty of the Himalayas was a high point for the entire group. “I just couldn’t believe my eyes. There are these really tall mountains covered in jungle. Then above that are giant tall white peaks. I never could have expected or even imagined myself here. It was so beautiful and amazing. But then it was almost too much to take in, like my mind just couldn’t take in all the beauty” said Blackwelder.

This amazing journey was an experience that everyone agreed was difficult, long, life changing, and one that they are so glad to have been a part of. More photos and video of the trek can be found online at the museum website johnhutchingsmuseum.org and on the Hutchings Museum Facebook page