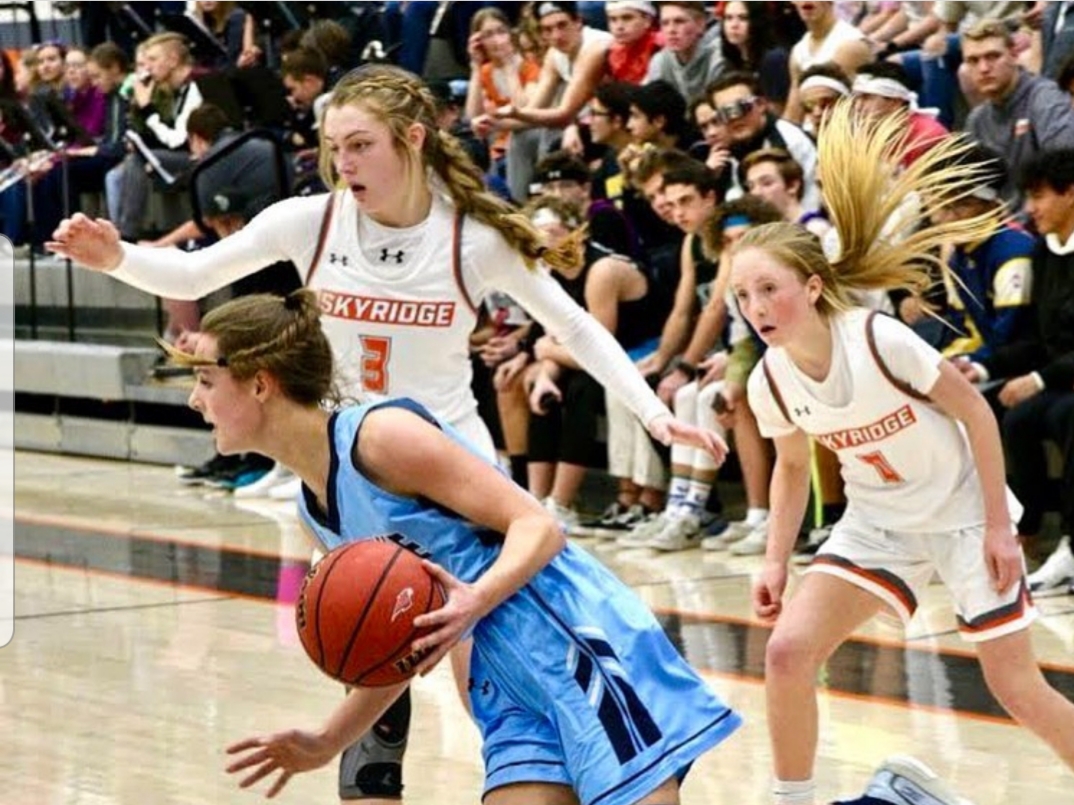 Chill winter weather owned the night outside Skyridge High School on Tuesday, January 14, but inside, the Falcons heated things up in a big way against Corner Canyon. Skyridge entered league play with an impressive 10-2 overall record in the inaugural season under Coach Gabriel Roberts.  Assistant Coach, Shaylee Neilson was at the helm for the Falcons in this contest.

Paced by 28 points from Ally Blackham, the Falcons poured in 88 points overall with a toasty shooting night from the field. Skyridge employed a barrage of 3-pointers to jump out to an early lead and pressed their advantage throughout the first half. Sharpshooter Kylee Holland dropped in 12 points from behind the arc, finishing with 16 points and contributing 3 assists and 3 steals. Brooke Lundell offered solid post play, adding 10 points and 6 rebounds while Sophomore Teagan Gray tossed in three more 3-pointers to aid the cause.  When all was said and done, Skyridge shot better from behind the 3-point line than from inside, racking up fourteen 3-pointers on 56% shooting from beyond the arc.

The Falcons complemented their torrid offense with a strong defensive outing. Blackham showed great energy on defense, leading the team with 9 steals and 11 more deflections. Corner Canyon was held to 20 points in the first half before the Skyridge starters began to give way to their bench. Sophomore Lilly Crofts led Corner Canyon with 13 points and 2 rebounds.

The stage was set Friday night, January 17, for a key Region 4 showdown between two teams with only three combined losses on the season as Skyridge (11-2) and Westlake (12-1) faced off at Skyridge High School. The Westlake Thunder were looking to bounce back from their first loss of the season to Lone Peak on Tuesday night while Skyridge was coming off a convincing win over Corner Canyon.

A slow pace was the story early as both teams attempted to feel things out. The hot shooting which carried the Falcons on Tuesday night was not there early in Friday’s game, and the size of the Westlake players proved to be a challenge. With some scrappy play on both ends of the court, Skyridge was able to create a little breathing room and a 10-point lead by halftime.

In the second half, the Falcons finally found their stroke and started to pull away with impressive accuracy from the field. Skyridge displayed a balanced attack with key scoring from Ally Blackham (16 points), Keylee Melling (13 points) and Kylee Holland (11 points). Melling was a noticeable spark plug with her energetic dribble-drives. Meanwhile, Brooke Lundell and Teagan Gray were active on the boards, combining for 13 rebounds. Lundell and Blackham each added a team high 5 steals in a solid defensive effort against a big Westlake lineup. Tessa Chaney and Jill Lundgren led the Thunder with 14 and 12 points respectively. The Falcons took home the win with a final score of 55-45.